ECS has detailed its upcoming AMD 990FX based "A990FXM-A" motherboard featuring support for AMD's upcoming Bulldozer based Zambezi-FX processors. The motherboard 990FX + SB950 chipset and Black AM3+ socket which would also be backward compatible with AM3 Processors. Pricing of AMD Bulldozer Processors has been detailed here.

The motherboard would be aimed towards high end hardware and overclocking enthusiasts. Powered by a 8+2 phase VRM area which comes equipped with adequate cooling in the form of heatsinks. A large rigid heatsink covers the VRM and Power area while a smaller aluminium heatsink plate covers the SB950 Southbridge. 3 PCI-e x16 slots are also included though its not known if they offer SLI or Crossfire Multi GPU support. 2 Mini PCi-e and 1 PCI Conventional slots are also included. The Four DDR3 slots allow for ram support with speeds of 1866mhz +.

Six Sata3 6Gbps ports allow for storage devices connectivity, 2 USB 2.0 ports are also included which are linked to the SB950. Its unclear how many USB 3.0/2.0 ports are included on the I/O panel but other connectivity ports include SPDIF, Firewire, E-Sata, 2 x Gigabit Ethernet and 8 Channel HD Audio support. Pricing would be made official at Computex 2011. 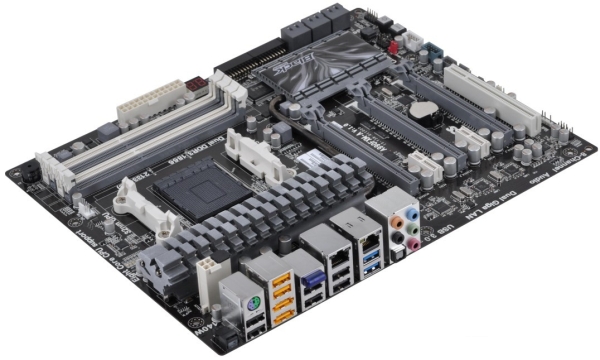 Details on other AMD 990FX based motherboards below: