Driveclub and Forza Horizon 2 are the upcoming two most anticipated and highly awaited racing video game titles that will launch exclusively on the PlayStation 4 and Xbox consoles, respectively. Both Sony and Microsoft are unveiling more of their upcoming racers, showing gamers how the latest consoles hold up against each other when it comes to putting out stunning in-game weather effects. Check out the GIF comparison between Driveclub and Forza Horzon 2's weather systems shared below and see which title holds more juice in terms of weather effects. 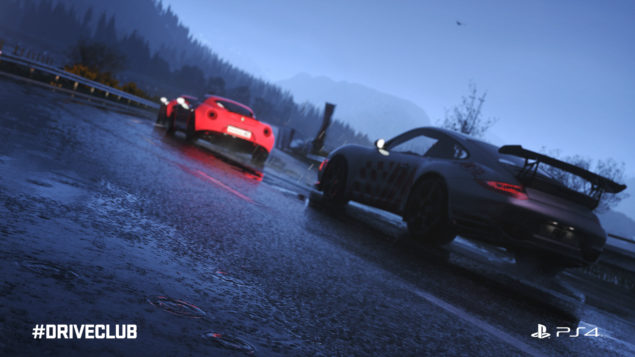 Officially announced during PlayStation 4 reveal press conference and currently being developed by Evolution Studios, Driveclub is undoubtedly one of the visually most impressive video games that are due to launch exclusively on the PlayStation 4 console. Forza Horizon 2, that was announced a few days before this year's E3, seems like Microsoft's response to Driveclub. The game is a sequel to 2012's famous Xbox 360 title known as Forza Horizon. Both the games are boasted to fully utilize the power of latest consoles, and no doubt both of them look charms in the previously revealed trailers.

Yesterday, PlayStation Europe blog shared a brand new gameplay footage of Driveclub showcasing the stunningly realistic and customizable "Dynamic Weather System" of the game in action. Don't worry if you missed it out, the footage is shared below, give it a look, and keep in mind that according to Evolution Studios' senior community manager, Jaime Bradshaw, the footage is taken from the early build of the game and Alex Perkeins, art director of Driveclub, has mentioned that the this weather system still has more room for improvement.

@JosecitoxSNSD right now! You tell me. It's a glimpse of rainfall in an early version of the @DRIVECLUB weather system.

@Apy_Olive it's still early days for the weather system. Everything, including audio, needs a lot of tweaking before we're happy 🙂

Taking it back to Microsoft's Forza Horizon 2; the Xbox One developer of the game, Playground Games, has also been working hard to create a dynamic next-gen in-game weather system, and some recently released media content certifies the statement. Both the games feature several new effects within their weather systems, one of which is the raindrop effect that makes the games look lovely, but when a comparison is made, Forza Horizon 2 seems far behind Driveclub in producing that amazing rainy weather scenery. Check out the Driveclub vs Forza Horizon 2 dynamic weather effects comparison below, courtesy of GearNuke.

Of course Driveclub looks more realistic when it comes to weather effects, but both the games are still in their development stages and only final build will tell which game is more pleasing. Driveclub is scheduled to release on October 7, 2014 exclusively for PlayStation 4 console and Forza Horizon 2 is set to launch on both Xbox One and Xbox 360 consoles on September 30, 2014.