A Samsung Galaxy S6 and Galaxy S6 edge internal consumer guide, reportedly meant for Samsung employees only, has leaked online showing all the new features and how they work in the Galaxy S6 duo. 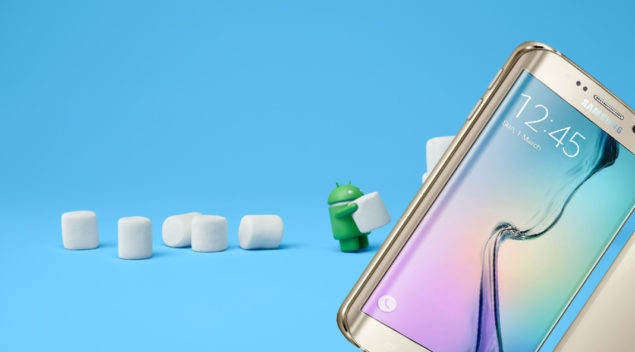 Just before the announcement of Samsung's upcoming flagship duo, the Samsung Galaxy S7 and Galaxy S7 edge, Sammy has finally started releasing Android 6.0 Marshmallow to the current flagship devices. Not all the regions have received this update yet, however, next two weeks will hopefully bring the latest firmware to all the Galaxy S6 and S6 edge devices. If you are looking forward to this update and want to know everything that is new and will be different in the upcoming software update for Galaxy S6 and S6 edge, you can download the consumer guide to check out all the little details.

While there are a ton of helpful usage tips and changes explained in this Android 6.0 Marshmallow consumer guide, do take a look at the encryption changes. Users will no longer be able to decrypt their devices anymore. Which means that those of you who have encrypted their smartphones, but wish to no longer have the encrypted storage will have to use the decrypt device feature before installing Android 6.0 Marshmallow, as decryption will be impossible afterwards. 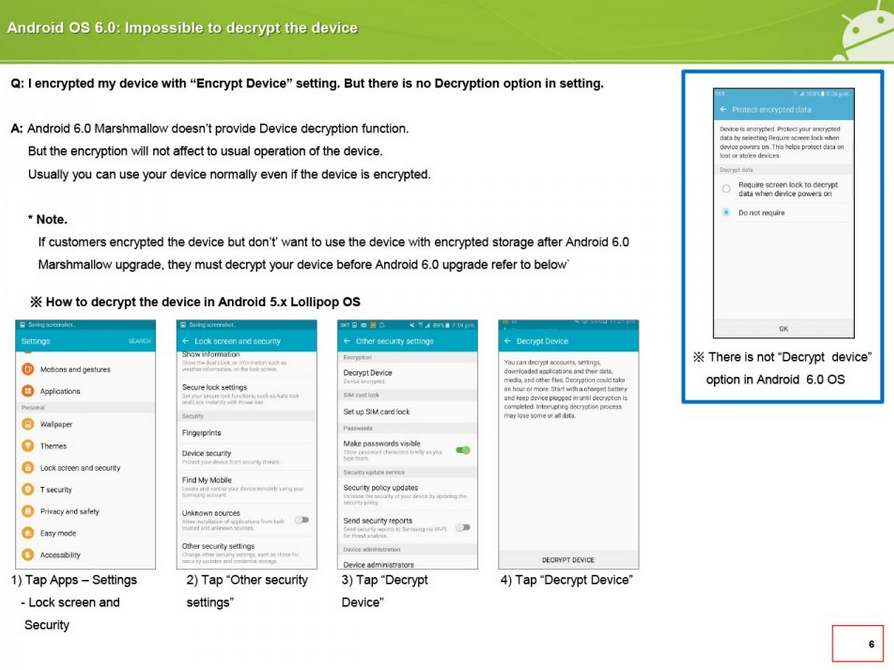 Among a myriad of new features that Android 6.0 Marshmallow brings to Samsung Galaxy S6 duo, some include the super helpful Doze battery mode, advanced control of app permissions, new collection of emoji, and contextual Google Now on Tap. Apart from these expected feature changes, the guide also reveals a modified lock screen bringing clock to the center and giving icons a little more vibrancy and color. S6 edge users will also get some extra settings to make any changes to the curved part of the screen. 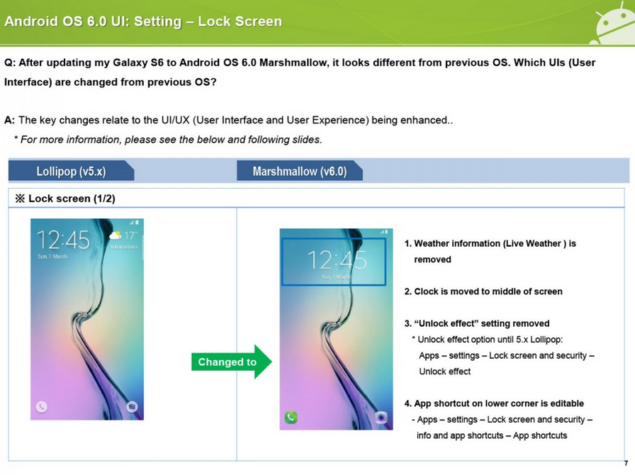 This guide is apparently designed as part of Samsung's training program for its employees in the consumer contact centers and Samsung's authorized service centers, giving them the ability to know every new feature and how it will be different from the previous iteration before it is rolled out to users. Folks at Sammobile have acquired these sheets and have kindly turned them into a useful PowerPoint file. You can download the file from here. Some of the sheets are included in this gallery.