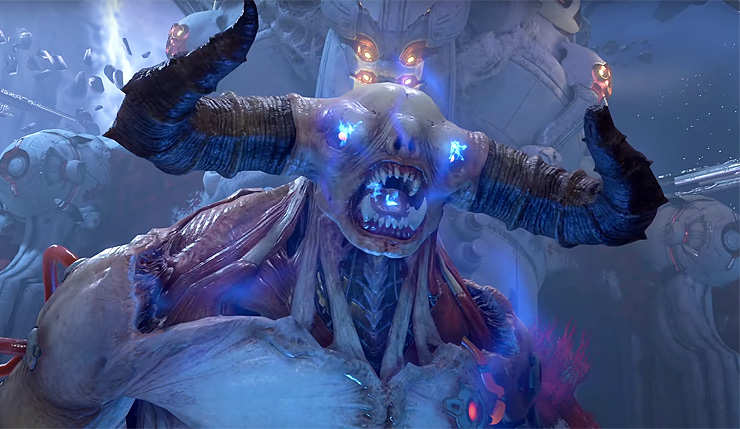 Doom Eternal was a jam-packed game, but this time around Doom Slayers are getting even more, as Bethesda and id Software are also offering a “Year One Pass” which includes two story expansions. Bethesda just provided a look at the first of these, The Ancient Gods, Part One, during the QuakeCon at Home opening ceremonies. The trailer is short, but it packs in a good amount of action! Check it out below.

Lots of big ugly demons being killed – check! [Looks at my list] hey, turns out that’s all I really need out of a Doom Eternal expansion! We don’t know all that much about The Ancient Gods yet, but id Software has provided this basic description:

The Slayer’s legend grows. Your victory over Hell’s armies pulled humanity back from the edge of extinction, but it came at a cost. An imbalance of power in the heavens requires the true ruler of this universe to rise and set things right. Wage war across never-before-seen realms of the DOOM Universe, fight against new demons, and wield new abilities in your never-ending battle against the forces of evil.

Haven’t played Doom Eternal yet? While not quite tight as its 2016 predecessor, Wccftech’s Chris Wray had a lot of fun with the shooter…

Doom Eternal is a brilliant game, one that is a worthy successor to the previous release. While the game does stumble here and there, trying to be something that it really shouldn't be, the outstanding gameplay more than makes up for any issues. Going by the campaign alone, Doom Eternal is well worth your time and money, particularly so if you liked Doom.

Doom Eternal is available now on PC, Xbox One, and PS4. Bethesda has announced the games are also coming to Xbox Series X and PS5 in 2021. The Ancient Gods is available to those who purchased the Doom Eternal Deluxe Edition or the $30 Year One Pass – a full reveal trailer is coming on August 27 at Gamescom Opening Night Live.