UPDATED: The Division Beta 1st On Xbox One On January 28

UPDATE: Ubisoft has confirmed that the Beta will launch for PS4 and PC on January 29th as well.

Your mission is about to start. The Division Closed Beta starts January 28th! Register on https://t.co/jFtAWJY0Ci pic.twitter.com/hfLGyCVlg7

The Division Beta will be available for Xbox One players first on January 28, 2016. Ubisoft announced this overnight on their official Facebook page.

The update from Ubisoft reads as follows: “When Society Falls We Rise. Play Tom Clancy's The Division Beta 1st on Xbox One Starting Jan 28th” 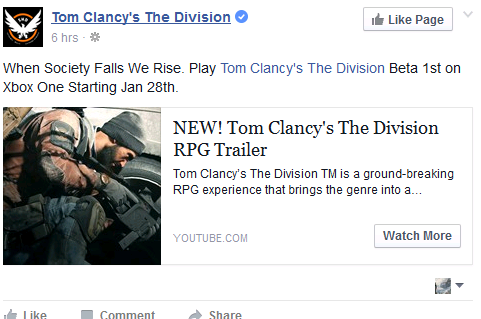 In the Tom Clancy’s The Division Beta, you will be one of the first to play the revolutionary next-gen experience that brings the RPG into a modern military setting for the first time.In the wake of a devastating pandemic that sweeps through New York City, basic services fail one by one, and without access to food or water, the city quickly descends into chaos.

The Division Beta first on Xbox One, Alpha exclusive to Xbox One as well

Earlier this week we already reported that the Beta was confirmed to be released this month. It’s uncertain when the beta for The Division will release on PC and PS4. Of course, it’s still possible that PS4 and PC owners will be able to play the Beta a day later – the release date for the beta that was leaked earlier this week. We reached out to Ubisoft whether they have more details on this matter.

The recently released Alpha for the game was exclusive to Microsoft’s console as well, and it seems that Microsoft made some sort of exclusive deal with Ubisoft regarding the title.

A few weeks ago, The Division was rated by the ESRB, and received a M rating for ‘Mature’. Hidden in the rating’s description though, were some interesting details on the game. I the rating is correct, The Division will feature hostage rescue missions. Aside from rescue missions, cutscenes also seem to be a part of Ubisoft’s upcoming title.

On top of that, the French Ubisoft Blog revealed, that the Brooklyn area will be exploreable in the game.
The Division is scheduled for a release on March 8 for PC, PS4, and Xbox One.

The Division Beta Cheaters Are Actually Exploiting Glitches, Team Working On Fixing Them