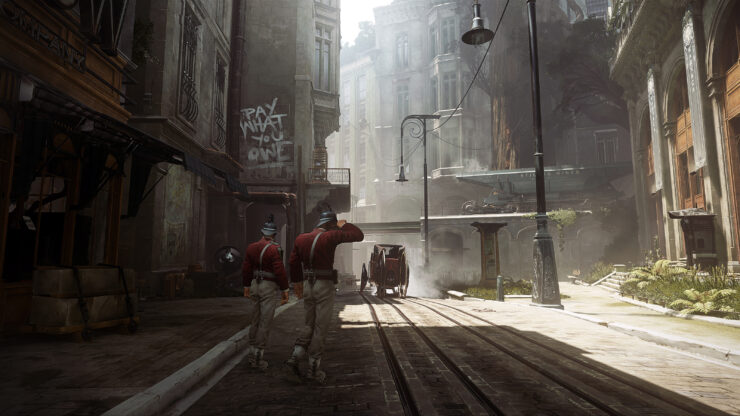 Dishonored 2, the new entry in the series developed by Arkane, has been released a few weeks ago on PC and consoles, but the PC version of the game is currently not the best way to experience it, as this version of the game suffers from a variety of issues that have yet to be fixed completely. A few hours ago, a new beta update has been released, and it seems like performance is, generally, more stable than before.

Several Reddit users have confirmed that Dishonored 2 runs slightly better with the 1.3 beta update. Drops are, unfortunately, still present when the game is played on machines that are powerful enough to run the game properly, but it seems like things are on the right track.

Playing with an i5 3570, a GTX 960, and 8GB of ram. It might be worth mentionning that I can now look at the bloodflies in terrariums without dropping to 29 FPS. I can hold a decently consistent 60 FPS even after turning godrays back on and very high textures.

Appears to have worked. I stopped playing a few days ago because I reached the Royal Conservatory and my FPS was shit. Last night while screwing around with settings, this viewpoint maxed at 43fps. It's now 56 steady. Previously I would be getting 60fps in the hallway directly behind this area, then it plummeted in that room. I'll update if playing reveals issues.
Specs:
i7-3770 GTX 970 16GB Ram. Most settings on high, no HBAO+. Using ReShade Lumasharpening with TXAA

User SuperTurtle24 reports that performance got worse in his case in most areas, but it's overall more stable when using auto settings.

My performance has gotten worse in some areas but over all it's a lot more stable using the auto settings rarely dropping below 60 now. Although I still believe a 1070 should be destroying this game considering the 1070 hadn't be released for most of it's development and while the game looks great I really don't see how it's so resource intensive.

User 163941 also pointed out that Mouse Acceleration has been almost fixed.

It has almost been fixed, but not entirely.

In my testing, the higher the framerate is - or if your framerate is inconsistent - there is still some negative acceleration.
Testing was done at 640x480 on the lowest settings, in a location where my framerate is above 110 FPS at all times.
If I cap to 30 FPS, it is almost completely gone and movement is nearly 1:1
As I increase the framerate limiter higher and higher, the difference between fast and slow movements gets larger.
This is significantly less than before. Previously at 10,000 CPI with my Razer DeathAdder Chroma, I was seeing 1800° rotation with slow movement and 90° with fast movement - the problem was severe.
I have now tested with a DA Chroma at 10,000 CPI and a G900 at 12,000 CPI and above 30 FPS I'm seeing around 360° and 400-450° for fast/slow movements depending on how high the framerate is.

Dishonored 2 is now available on PC, PlayStation 4 and Xbox One in all regions. You can learn more about the 1.3 update by going here.