[Update] Blizzard has now confirmed that the Diablo II Resurrected Alpha will kick off on April 8th.

Let the claws of the demons drag you back in. The #DiabloII: Resurrected Technical Alpha starts 4/8.

Initially spotted by Blizzard forum user “낙타가낙타낙타”, the ‘leak’ quickly made its way on Reddit. Apparently, the Korean Game Management Committee briefly registered a test schedule for the upcoming title in Korea. According to the now-removed schedule, the test is to take place from April 9th till April 13th with Blizzard allowing up to 19.999 testers from age 18 and above.

Luckily, the internet doesn’t forget and website Inven.co.kr (as caught by eagle-eyed Blizzplanet forum user ‘Flam744) managed to grab a screenshot of the schedule before it was pulled. We’ve included this screenshot down below. 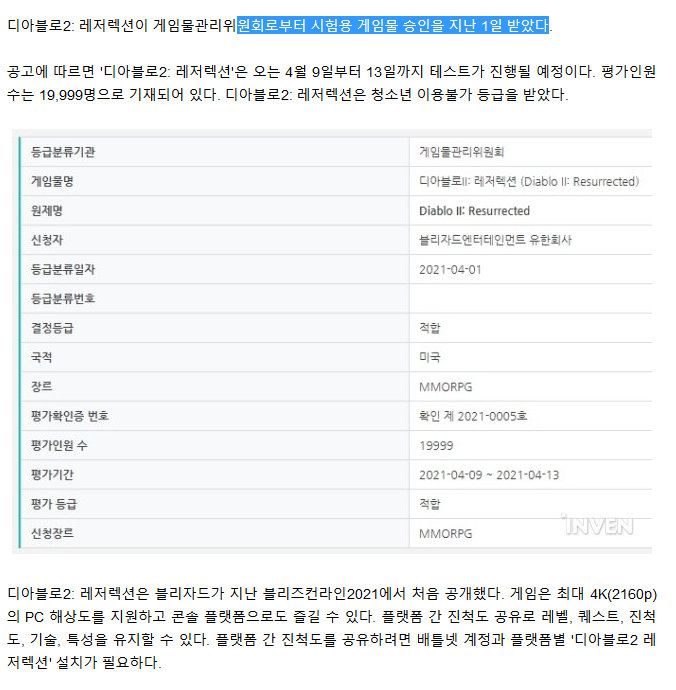 Aside from this schedule, no further details about this alleged Alpha were revealed. It is, however, worth noting that the Diablo II: Resurrected internal alpha client was updated yesterday, and a new subdomain was reportedly added to the diablo2.blizzard.com website last week.

Diablo II Resurrected was officially announced during Blizzard’s BlizzConline event back in February of this year. As confirmed by the game’s lead producer, Chris Lena, a multiplayer stress test will kick off after a single-player alpha. Those interested can still opt-in for the game’s technical Alpha right here.

Diablo II: Resurrected is slated for a release on PC and Xbox Series X/S, PS4, PS5, and Nintendo Switch later this year. For PC players, be sure to check out the game’s official system requirements right here. In case you're interested in an early comparison video, comparing the original Diablo II to the upcoming remastered version, check out this article right here. We've also included the comparison video below for easier viewing.