Delta Six – The Best Controller an FPS Gamer can have, coming to PC, Current Gen and Possibly Next Gen

Ever wanted to go into the a particular fps game and have the actual trigger pressing, adrenaline fueled fun? Ever wondered what it would feel like to have recoil coursing through your arms as you shred down enemies? Think no further, introducing an FPS Lover's best friend: The Delta Six Gun Controller.

Delta Six: The Only Controller that will will give you the Complete FPS Experience

We cant stress enough how unbelievably excited we are about the Delta Six Controller. This thing is seriously high tech. And just imagine the Delta Six coupled with the Occulus Rift, i have one word for you: Wow. This controller is basically a gun replica. It is made out of a professional black matte plastic constructions with every possible feature you could dream off. Thinking Realistic Dynamic Recoil? You got it. Thinking tap reload? you got it. Thinking Melee Attacks with the butt of your gun? You got it. The Delta Six leaves no stone unturned. 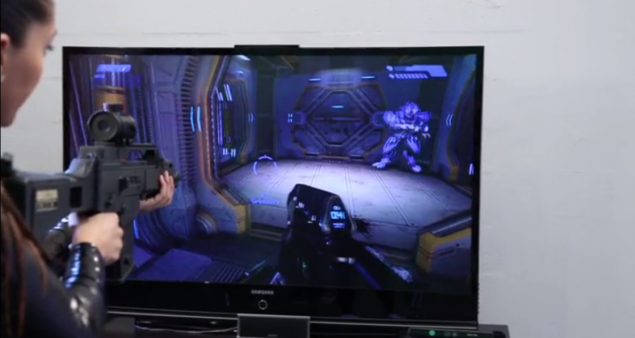 Excuse my ranting, but this is an absolute gem. It basically works using an advanced implementation of the old Sega Optical Gun and modern gyro and accelerometers.

The Delta Six complete Pre-Order package will cost you around $300. This is going to bring a revolution in FPS gaming with the skill advantage shifting towards real life reaction time.

Check out the homepage over here. The Delta Six i currently being released as an open source initiative for Windows, Xbox 360 and PlayStation 3 but the devs are saying that you can count on Next Gen support pretty soon. Once again excuse my rant but just imagine playing Battlefield 4 on this controller, couple this with a good display and a surround system and you are in heaven.

The Best Controller an #FPS Lover Can Have - Coming to Windows, #PS3, #Xbox 360 and Possibly Next Gen. http://t.co/igGdMubkxY