Up until a few hours ago, From Software and Bandai Namco have shown very little of the PC version of Dark Souls 3, the new entry of the series launching next month in the West. A few hours ago, however, more details on this version of the game have emerged online thanks to a livestream.

In a livestream by IGN from a few hours back, the Dark Souls 3 PC graphics options have been revealed in full. During the livestream, the game was running on high settings, and it definitely looked great. 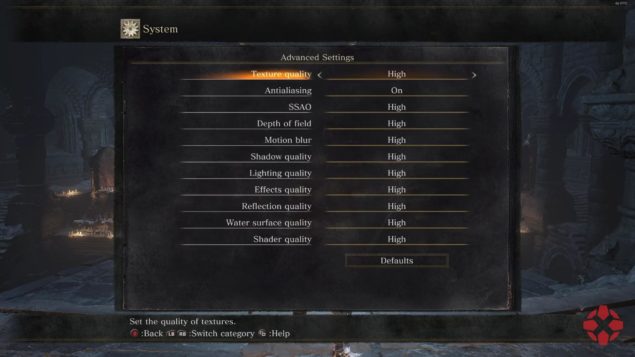 The livestream has also shown the key binding options, which you can check out right below.

Unfortunately, playing Dark Souls 3 on high settings may come with some performance hiccups. IGN was running the game on a GTX980, and the game suffered from some frame rate drops.

Earlier this week, Bandai Namco has finally confirmed that the PC version of Dark Souls 3 is not locked at 30 FPS, as it was being rumored. Players with powerful enough machines will be able to run the game at 60 FPS without any sort of limitation.

Yesterday, new Dark Souls 3 gameplay footage has surfaced online from SXSW Gaming 2016. The new footage, which is commented by a Bandai Namco rep, revealed some new details on luck scaling weapons and spells, lore, and other gameplay mechanics.

Two days ago, even more Dark Souls 3 gameplay footage has emerged online. The footage features the beginning area, the Cemetery of Ash, so no new locations have been shown, but it still featured something new, as it also features Elite Knight equipment.