Throughout the development of Cyberpunk 2077 a persistent question remained in many fans’ minds, namely, “How the heck is this going to run on the PS4 and Xbox One S?” Pretty much all the footage CD Projekt Red showed pre-launch was running on high-end PCs, and they later gave us brief, heavily-edited glimpses of the game running on Xbox One X, Xbox Series X, PS4 Pro, and PS5, but base current-gen consoles? We were never granted a look at those, and it turns out there’s a good reason for that!

Cyberpunk 2077 is now in everyone’s hands, and it turns out the game looks awful on the base PS4 and Xbox One. According to the tech heads at Digital Foundry, the game looks to run at around 720p on base consoles, but that doesn’t tell the whole story – textures and assets are also very low quality, giving the game the look of a half-assed Switch port. Even with the ugly visuals, performance is still underwhelming, with DF finding it often drops to the low 20s and sometimes as low as 15fps. 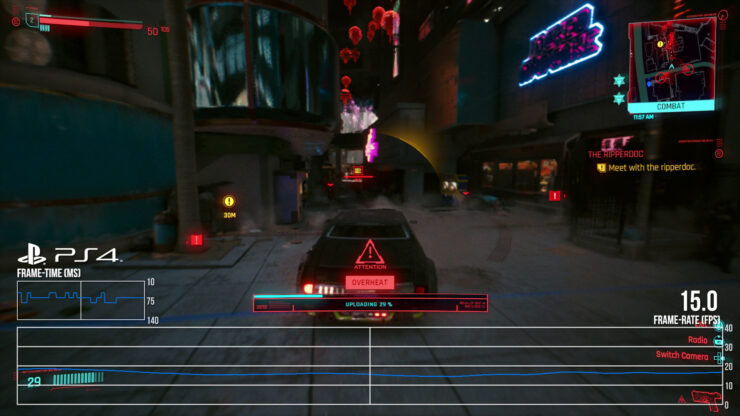 Now, Cyberpunk 2077 does come with a Day 1 patch, which CD Projekt Red has said transforms it into “a different game.” Well, maybe it does on more powerful consoles, but don’t expect much change on the base PS4 and Xbox One. YouTuber TeMkA169 took the PS4 version of Cyberpunk 2077, with the Day 1 patch applied (ver 1.02), and the game is still an eye-straining blurfest. Perhaps the framerate is a bit improved, although we still see drops to around 20fps when lots of NPCs are around.

Update: Digital Foundry has released a full video detailing Cyberpunk's performance on the PS4 and PS4 Pro. On the base system, the game runs at a dynamic 900p, with dips down to 720p, and framerate can fall as low as 15fps. Meanwhile, on PS4 Pro you're looking at a dynamic resolution of 972p to 1188p, with a somewhat more stable framerate, although expect dips to the low 20s again as you drive around crowded parts of Night City

Original story continues: So yeah, the question of “How is CD Projekt Red going to get Cyberpunk 2077 working on Xbox One S and PS4?” has been answered – they didn’t. If you only have a base current-gen console, I highly suggest you wait on Cyberpunk 2077. The game reportedly runs better on Xbox One X, Xbox Series X, PS4 Pro, and PS5, but there are still visual and performance issues. If you want that real Cyberpunk 2077 experience, the one you saw in all the trailers, it seems PC is your option for now.

Cyberpunk 2077 is available now on PC, Xbox One, and PS4, and can be played on Xbox Series X and PS5 via backward compatibility. Full next-gen console versions are coming sometime in 2021.