First up, we have the Crucial DDR4 Ballistix memory which is specifically aimed towards the X99 chipset platform which features Quad Channel memory support with the upcoming Haswell-E processors that include the flagship Core i7-5960X processor boasting 8 Cores and 16 threads. Designed for gamers, enthusiasts and overclockers of the X99 adopters, the Ballistix Elite memory would deliver introductory speeds of 2666 MHz and 3000 MHz and would gradually increase with the passage of time. It should be noted that DDR3 arrived in the market with its initial introductory speeds of just 1066 MHz - 1333 MHz and manufacturer's now offer DDR3 memory clocked at 3000 MHz out-of-box. The DDR4 introductory speeds are rated at 2133 MHz - 2400 MHz but if memory makers are releasing 3000 MHz at debut of the new memory type, then we can easily see speeds of up to 4266 MHz in few years time.

As for the memory kit itself, the Crucial DDR4 Ballistix Elite would be available in 4 GB and 8 GB modules and also 8 GB, 16 GB and 32 GB memory kits. They feature a maximum bandwidth of 24 GB/s delivering improved system performance and responsiveness since the processor can access data faster and delivers up to 40 percent more efficiency compared to standard DDR3 memory type. The Ballistix Elite brand is designed with gamers in mind hence is optimized towards the Intel X99 platform with support for XMP 2.0 profile.

The memory modules feature an aggressively styled anodized aluminum heat spreader which helps dissipate heat more effectively while the memory stick uses a full black PCB which looks great from an aesthetic point of view. It even comes with the M.O.D (Memory Overview Display) utility that allows users to monitor thermals in real time.

"Gamers and enthusiasts push their systems to the limit and are always looking for ways to reduce bottlenecks," said Jeremy Mortenson, product marketing manager, Crucial. "With the introduction of Ballistix DDR4, the fastest memory speeds and bandwidths are now more accessible. Along with making peak performance attainable, Ballistix DDR4 also sets up gamers and enthusiasts for the next wave of performance that will only be possible with newer platforms using DDR4." via Crucial 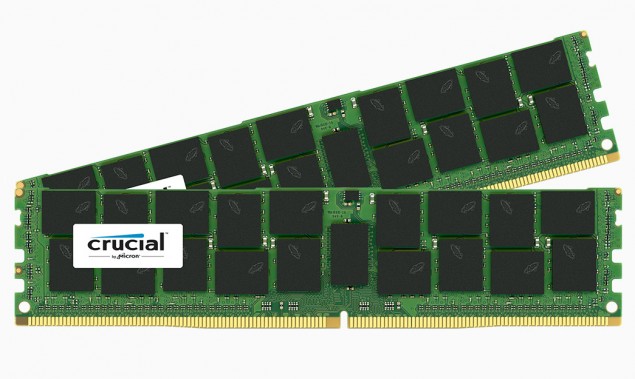 The memory sticks will launch in August and would be backed by a limited lifetime warranty. As for the server memory, Crucial has now made available their DDR4 server memory for the enterprise market which will go in works with the upcoming Haswell-EP server platforms. The modules which come in capacities of 8 GB, 16 GB, 32 GB are optimized towards the Haswell-EP Xeon E5-2600 V3 family and will operate at 2133 MHz pumping out 17 GB/s bandwidth at voltage input of just 1.2V which is standard for DDR4 memory.

"The speed and efficiency benefits of DDR4 technology mark a significant advancement in server computing," said Shannon Poulin, Vice President of Intel's Data Center Group. "As a brand of Micron, Crucial not only understands the technology needed to support the evolution of computing ecosystems, but also how to best service the needs of our mutual channel customers. We're thrilled to continue Intel's collaboration with Crucial, as we reach yet another milestone in enabling next-generation server platforms together."

Pricing of the sticks is not known at the moment but they'll most likely be on the high side at launch and gradually fall with the advance of time.

Crucial MX500 2TB SSD is Currently on Sale at Amazon!