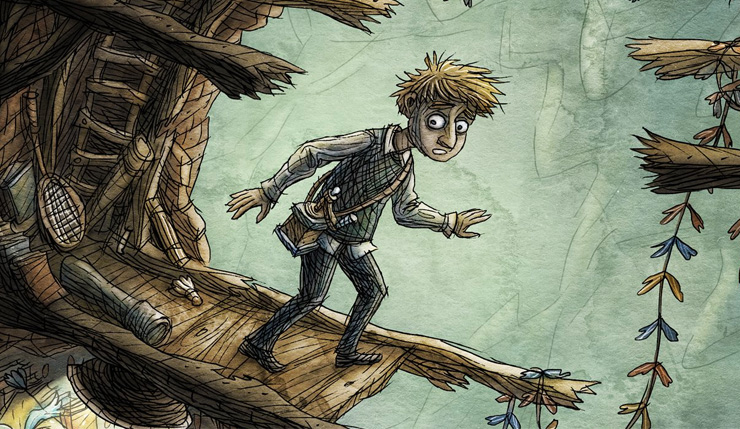 Over the past 15 years, Czech studio Amanita Design has quietly made a name for itself as one of the most unique and fiercely independent developers in the industry. The company broke out with the wonderful adventure game Machinarium and have since produced a series of critically acclaimed charmers, including Botanicula, Chuchel, and Pilgrims. Next week marks the release of Creaks, their most detailed and ambitious game yet.

Creaks leaves behind the simple point ‘n’ click mechanics of past Amanita games behind, in favor of a puzzle platformer approach. You play as an unnamed protagonist who discovers an entire mysterious world exists underneath his room – descent to the deepest depths while avoiding various persistent enemies. You can check out a trailer for Creaks, below.

Want to know more about Creaks? Check out my full interview with Amanita Design founder Jakub Dvorský, as well as the following official description:

Meet Your New Neighbours. The ground starts shaking, light bulbs are breaking - and something rather unusual is happening right behind the walls of your very room. Equipped with nothing but wit and courage, you slowly descend into a world inhabited by avian folk and seemingly deadly furniture monsters.

From the creators of indie classics Machinarium and Samorost comes Creaks, a new puzzle adventure game that delights the senses with its hand-painted visuals, precise animation, eerie sounds, and an eclectic original score from Hidden Orchestra. Proceed at your own pace at figuring out the solutions to dozens of carefully designed puzzles, explore the mansion for hidden paintings and uncover the great secret. Creaks is best enjoyed with a controller and a good pair of headphones.

Creaks released this past Friday on Apple Arcade. The game creeps onto PC, Xbox One, PS4, and Nintendo Switch on July 22. Expect a review later this week!