Here's a blast from the past! Sega has released its Crazy Taxi game for iPhone, iPad and iPod touch and it is now available for download from the iTunes App Store. Earlier this week Sega had released a teaser trailer video of this game and said that the release will take place sometime in October. Little did we know, by sometime in October Sega meant later this week. Crazy Taxi is no doubt a very nostalgic game for those who have lived through the early 2000s playing this massive hit from Sega. 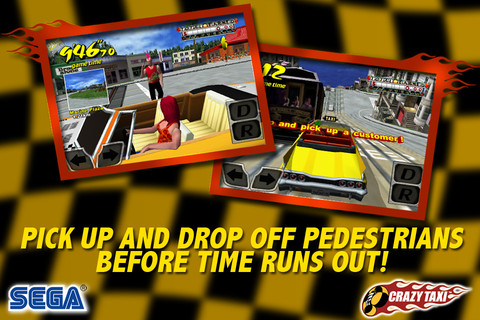 The game has a simple objective yet it offers intoxicating and addictive gameplay. The player has to barrel through traffic packed streets, hurdle off parking garages, and then crazy combo their way to crazy money in a wild frantic race to scare up the most fares. Users have to pick and drop pedestrians before the time runs out and the game progresses, this simple task gets crazier and crazier. To be victorious in this game, you really have to become a notorious virtual cabbie. 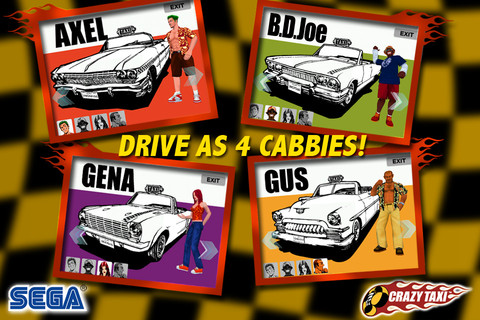 Crazy Taxi game for iPhone, iPad and iPod touch is truly a blast from the past. This game has been specifically remastered for mobile devices and it even features the original music by The Offspring and Bad Religion. The game is filled with elements that make the gameplay exciting, such as extra large hills, parked transporters with conveniently angled ramps and painfully slow buses and cable cars which surely frustrate and annoy the player. 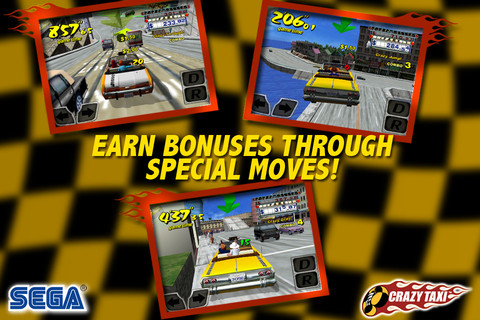 Players can choose from 3, 5 or 10 minute game play in Arcade Mode and Original Mode. Crazy Taxi game for iPhone can either be played by using touchscreen based controls or in tit control mode which makes use of the accelerometer on your iOS device. Crazy Taxi for iOS also comes with 16 Mini games and it features Game Center leaderboard and achievement support. There is also the ability to listen to tracks from your own music playlist.

Crazy Taxi game for iPhone, iPad and iPod touch is available as a universal binary for your particular iOS device. Up till now the reviews of this game have been good, however if you own an iPhone 5 you're out of luck as there is no support yet for Apple's latest and greatest smartphone. The game is compatible with iPhone, iPad and iPod touch provided they are capable of running iOS 4.3 or higher.

Crazy Taxi game for iPhone and other iOS devices is priced at $4.99 and is available for download right now from the iTunes App Store.