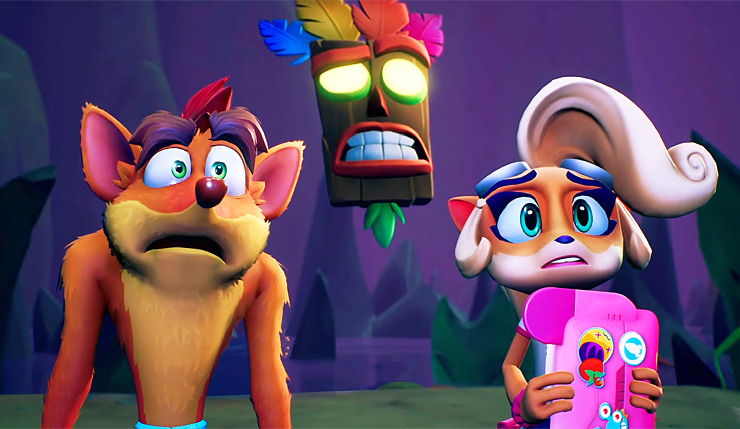 The release of Crash Bandicoot 4: It’s About Time is only a short couple months away, and today during the latest State of Play presentation, Activision and developer Toys for Bob showed off some of the game’s new features. These include new platforming abilities, characters (Dingodile is now playable!), masks, and cosmetic skins. On the subject of skins, Toys for Bob reiterated that Crash 4 will have no microtransactions, and that the new looks will be strictly earned through gameplay.

Perhaps the biggest reveal was “N. Verted Mode,” which not only mirrors all the game’s levels, but adds new objectives and visual filters to them as well. Considering Crash 4 is rumored to have over 100 levels to begin with, it sounds like we’re going to be playing this game for a very, very long time. Check out the new Crash Bandicoot 4 footage for yourself, below.

Earnable Skins (er… furs?) to show off your achievements

During the original trilogy, Crash and Coco sometimes donned outfits to blend into their time period or environment. For example, if our marsupial had to race a bunch of rough biker folk, he would suit up in his most menacing leather jacket, as he may have stuck out like a sore, furry, orange thumb if he went in au natural (including his shorts and shoes, of course).

For It’s About Time, Toys for Bob have combined the fun cosmetic changes for Crash and Coco with the challenge of earning gems or completing specific tasks. Now, Crash and Coco have dozens upon dozens of costumes and wacky outfits to wear across any level, adding another level of zaniness to the N. Sane nature of Crash Bandicoot 4: It’s About Time. Consider these marks of achievement within the game; whenever you earn a skin, it’s a sign of accomplishment for the skill it took to outfit Crash or Coco with it.

Completing Crash Bandicoot 4: It’s About Time – from collecting Time Crystals to Gems and more – is an achievement in of itself… But there is one ace in the hole that Toys for Bob, in collaboration with Beenox, has for truly testing out Bandicoots: N. Verted Mode! N. Verted mode takes the concept of mirror mode and phase shifts it into another dimension. Perspective isn’t the only thing that changed -- when playing in a dimension on N. Verted mode, that dimension may involve splattering paint to see your path forward, or keeping up with an old timey film reel that cranks up gameplay speed just as fast as it puts the picture on the screen.

Once you unlock this mode, all the game’s levels are repayable with this new art style, game feel, and challenges, allowing for the true completionists at heart to further challenge themselves for even more rewards, or for anyone who is curious about how their favorite levels get N. Verted.

Crash Bandicoot 4: It’s About Time spins onto Xbox One and PS4 on October 2. Pre-orders for the game are now open.