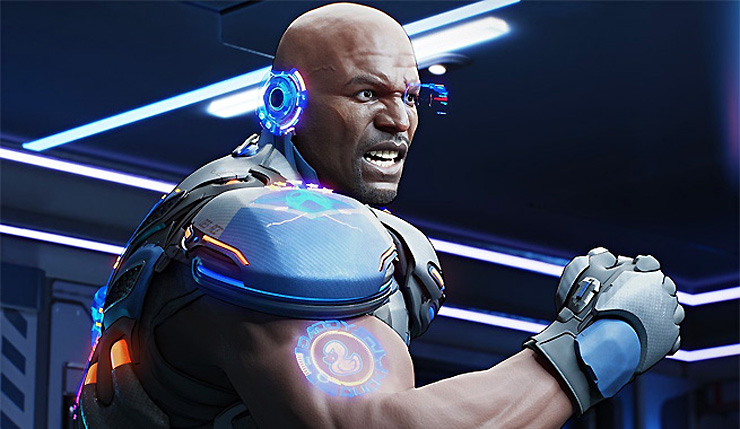 You can thank Metro Exodus for locking me out of testing from hardware configuration changes for this one. Despite the graphical downgrade that Crackdown 3 had received from earlier showings we felt it a good idea to see how it is performing in the series first crack at being available on the PC. Thanks to the Xbox Game Pass that I have I had the game available on day one and thanks to it not locking me out I was able to get the testing done in a relatively short time. Open world games often present their own challenges when testing and Crackdown 3 was no different. If you're looking for the review you'll find we have a full review of the game up as well where we find out if it's all it's cracked up to be.

Testing open world games is a bit of an interesting affair, and after spending some time playing the game and finding it to be fairly consistent in performance I picked a section of the initial world just past the main introduction and claiming a spawn point.  From that point I ran several blocks  while being shot at and ended the run after a minute.  Thankfully this run was very consistent in the worlds responses to me each time. We ran this at various resolutions for three times per resolution.  As far as test benches go I stuck with just our z370 and Core i9 9900K test system for this game. I will likely will stick to just that test system until I can get my hands on a Ryzen 7 2700x since using the Ryzen 7 1700 at 4GHz seems to cause quite a bit of issue.  Feel free to sound off in the comments if you would like for me to revisit and add the Ryzen 7 chip to the performance evaluation. 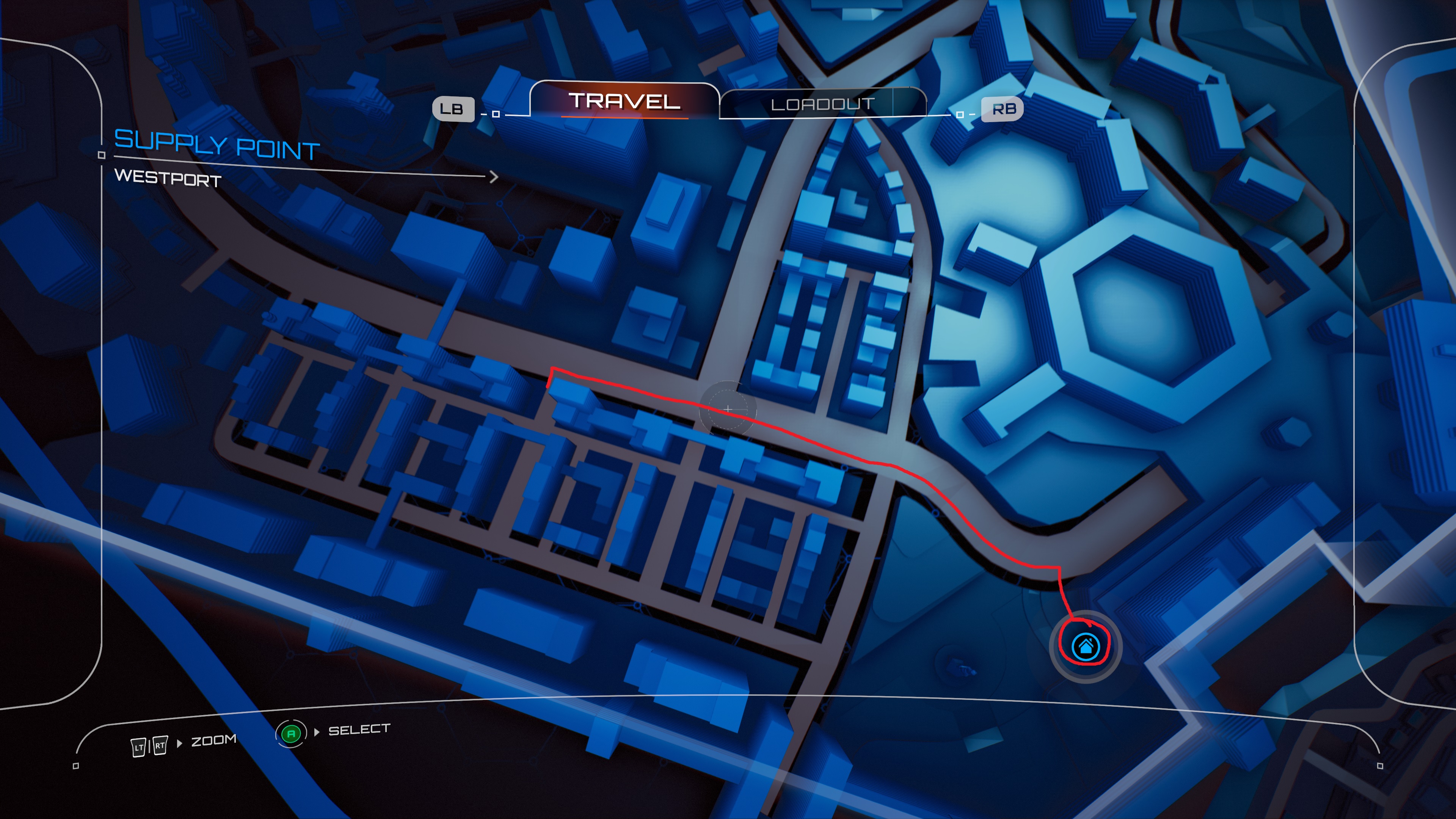 This test is always an interesting one to me as we get to have a look at how the presets scale, but doing them at UHD helps to eliminate as much CPU impact as possible so that we can see just how much of an effect certain settings can have on overall performance. We can see here that Extreme has a big impact on minimum frame rates compared to Ultra, and dropping from Ultra down to Medium has little impact on the minimums but big gains on averages.  Going down to Low is the only one to have an overall large gain on the minimum frame rates. 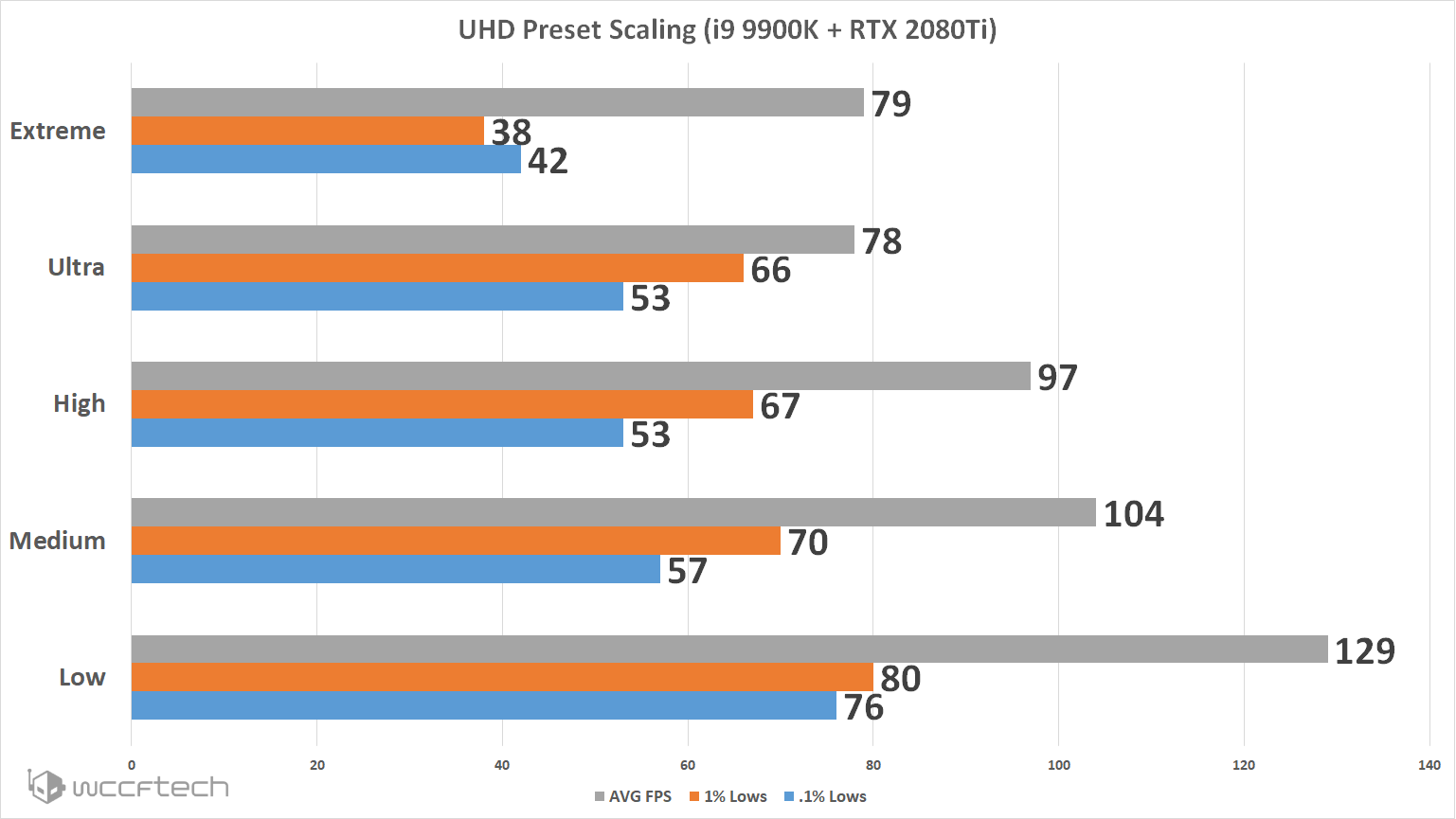 For a console port we see some good gains by cores being added, well to a point that is.  The game would launch to the menu screen with 2c/2t but would not load the game itself.  Running 2c/4t resulted in a splash screen warning that it was below spec and could cause problems.  Performance steps up with each increase of cores and threads, not by huge stretches ones 6 cores are introduced but a welcome sight to see even this title taking advantage of more cores.  We can chalk this up to the game actually being built on DX12 rather than just a wrapper option. 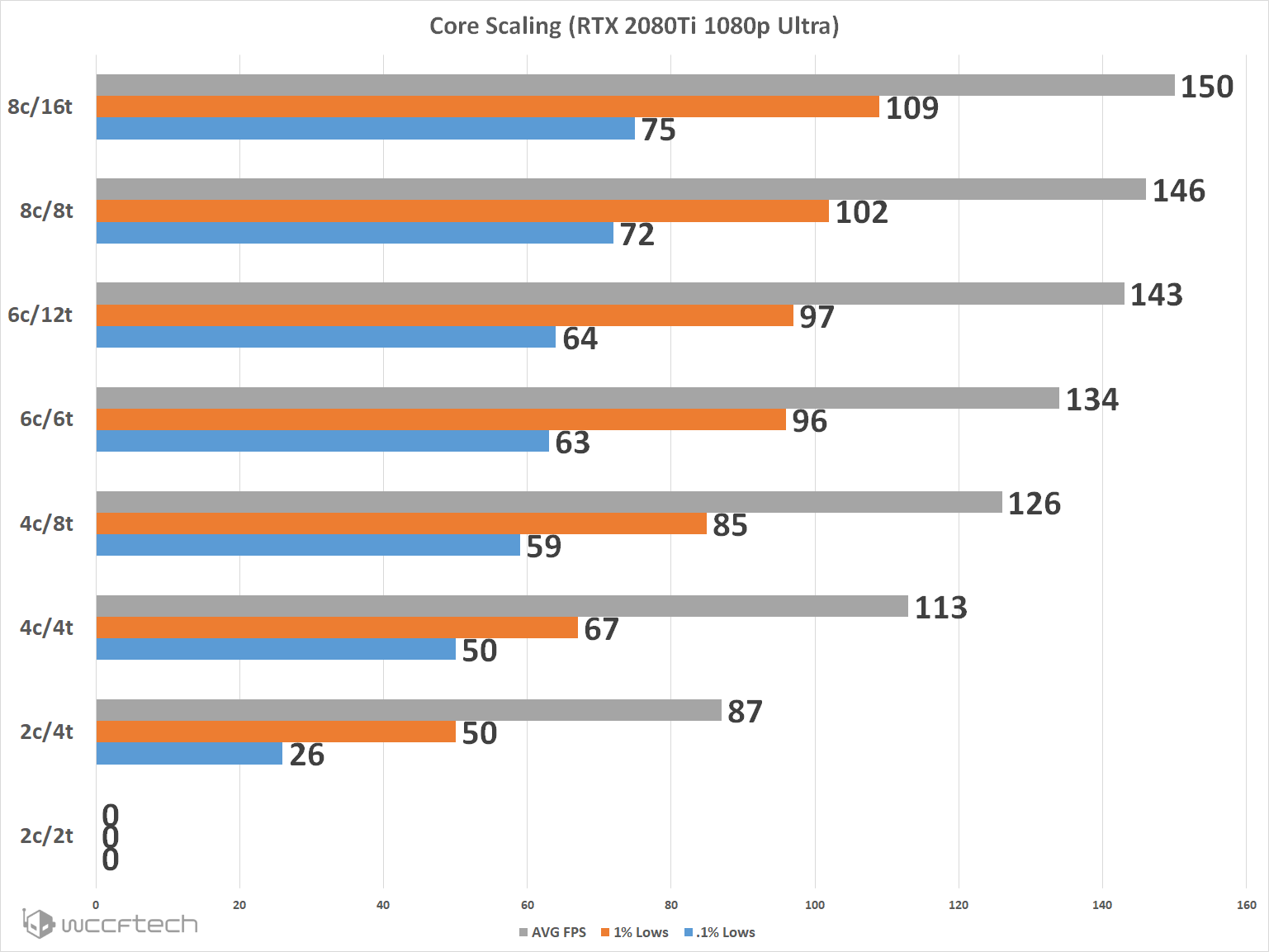 At 1080p we see every card in our lineup break the 60fps barrier at Ultra settings.  This is a good thing to see, but it does come with a caveat and that's weak .1% low performance that is especially evident as we move up the class of cards.  These .1% are noticeable while gaming and when using the games built in monitoring overlay you can easily see that it's CPU induced, another thorn in the side of open world games.  The good news is this can be alleviated a bit thanks to the games resolution scaling feature that lets you run the game at larger than native resolutions, essentially allowing for super sampling. 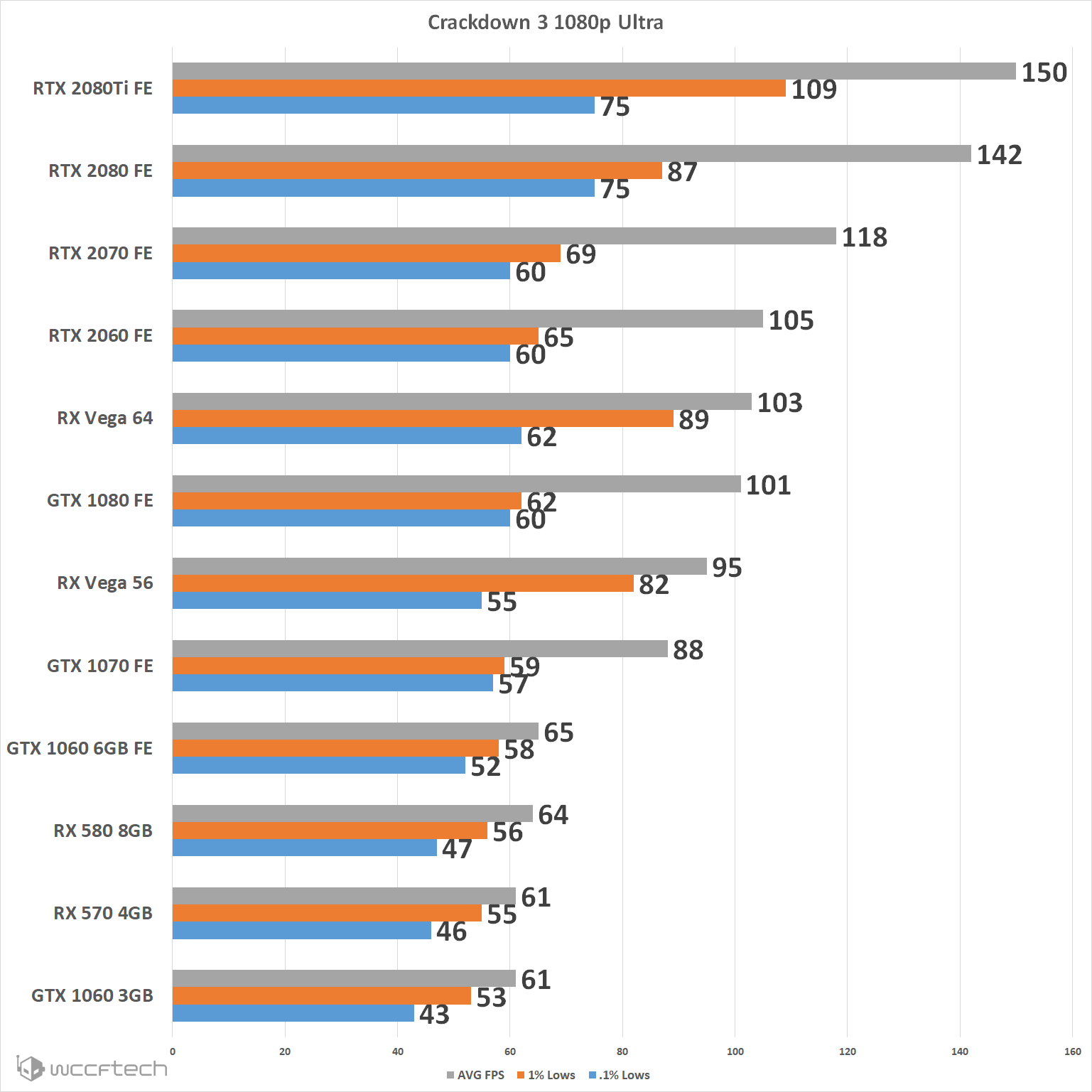 Running at WQHD shows similar scaling but the averages are reduced at the higher tier of cards while the .1% lows remain the same.  The experience is much smoother here thanks to the tighter spread from those lows to the average and it's nearly as noticeable while playing. It does however leave everything below a GTX 1070 at sub 60fps performance levels. 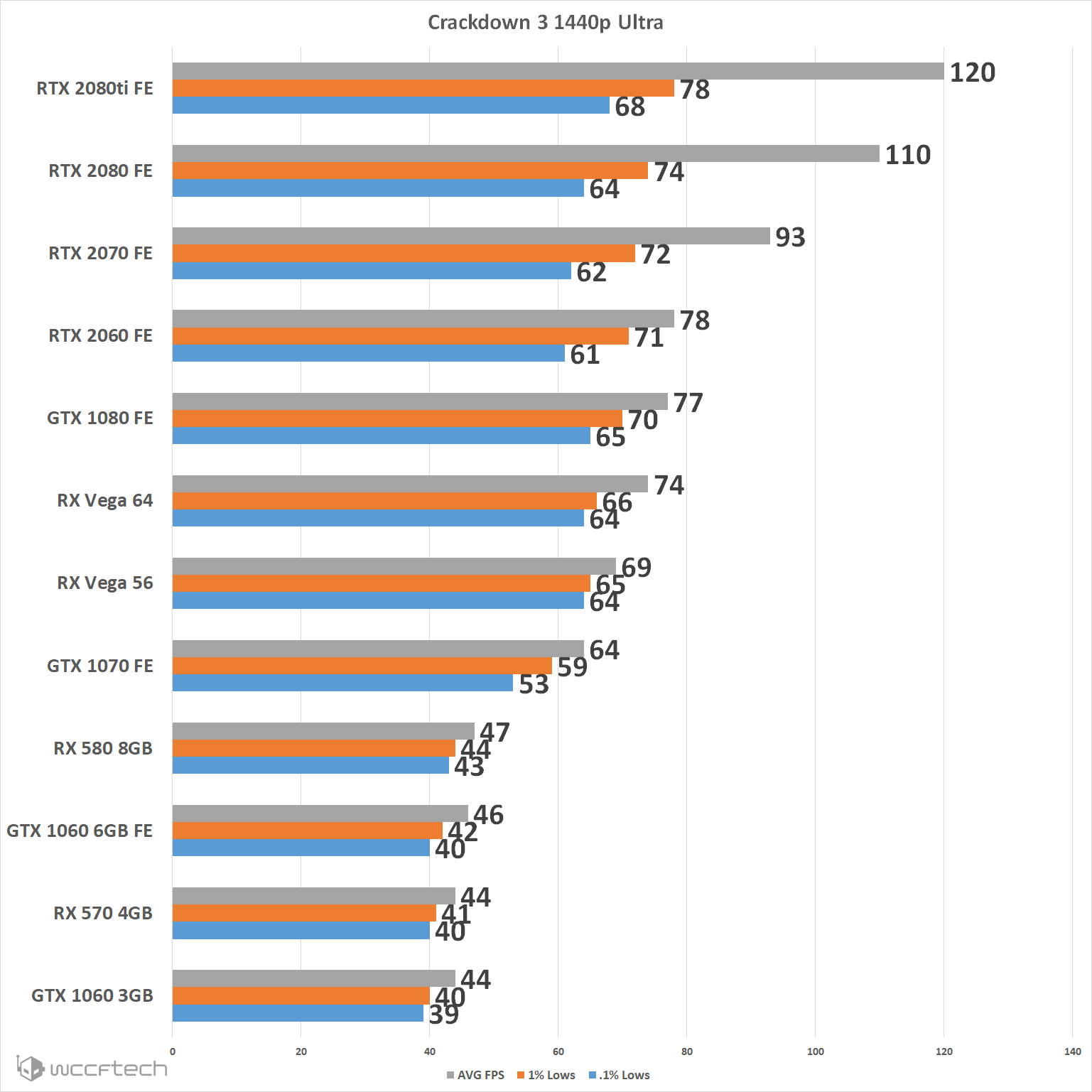 Running at UHD resolutions results in the most consistent performance yet, but there are only two cards breaking the 60fps barrier at the Ultra preset.  RX Vega put up respectable numbers here with the highest minimums in it's class and limiting the framerate and using Freesync would result in a playable experience. 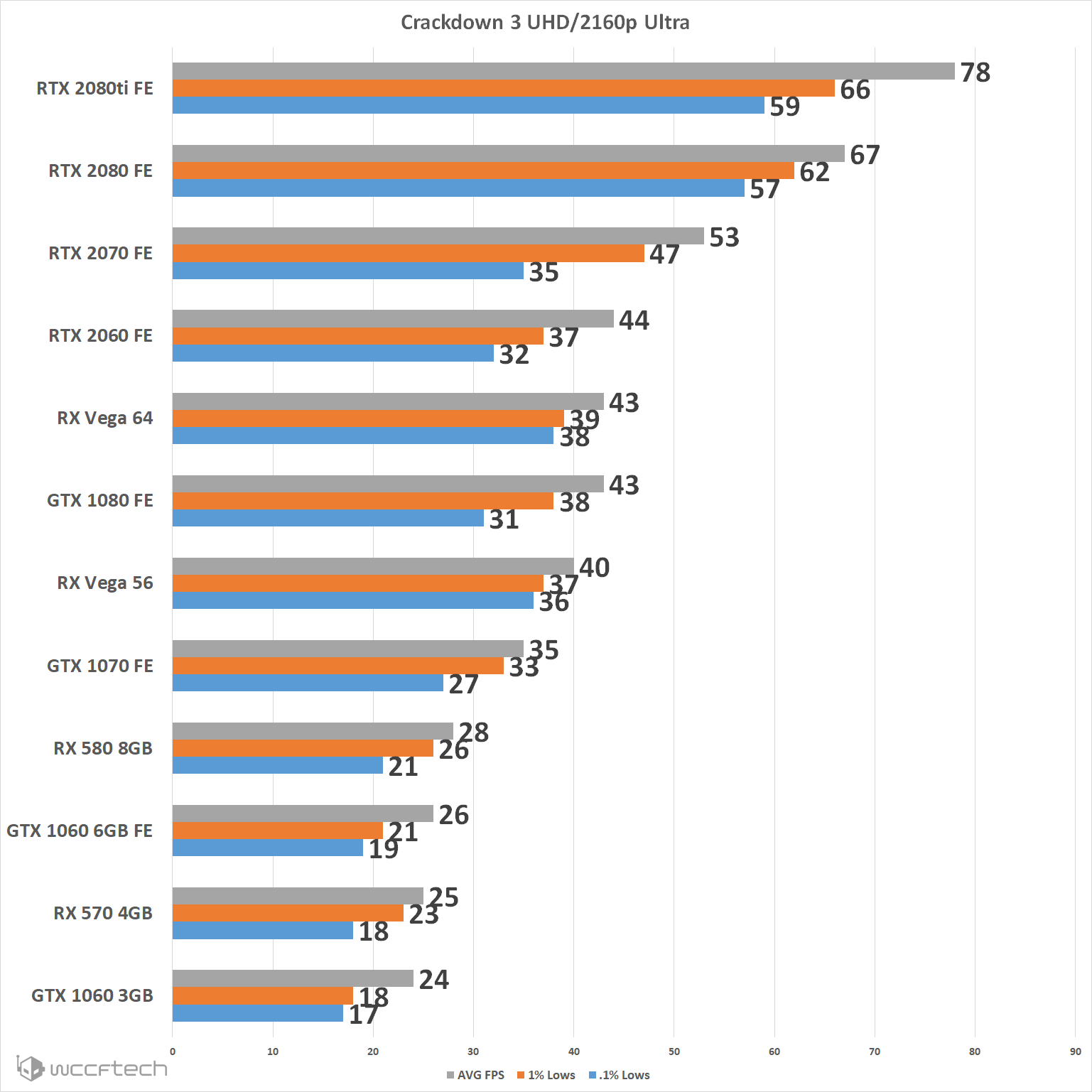 I have to admit that I was expecting a lot worse of a performer in with this game, but had a ray of hope after seeing the extensive graphics options including async compute showed attention was paid.  The 1080p performance on cards designed for that resolution play very well while the others suffer from low minimums.  But like mentioned earlier it's a problem that goes away at higher resolutions.  I guess you could say that all cards play well at the resolutions they were designed to be used at, so 1080p cards do well at 1080p and 1440p cards run at that resolution and so forth.  The game doesn't seem to favor one vendor over the other and ends up running nicely.  I will give a word of advice, if you do play this on PC it feels janky with a mouse and keyboard so make sure you have a controller handy.