The gaming landscape has entirely changed since the original Crackdown released in 2007. The rise of Call of Duty, the historic peak and slow decline of World of Warcraft, the FGC (fighting game community) resurgence, the advent of MOBA and Battle Royale games. The world Crackdown 3 launches into is so far removed from the games it was built to compete and innovate with it's like jumping into a time machine. And yet, this is a game which is faithful to a fault to the design of the original game. This is a direct sequel, no doubt about it, and that's either incredibly brave or incredibly stupid. Maybe both.

Crackdown 3 is an open world action game where you liberate an oppressed city from its militarised, futuristic police force and corrupt government. Playing as one of a variety of heroes (the correct choice is the Terry Crews avatar) you jump, punch, and shoot your way to freedom as you systematically move through the city, tearing down government installations.

It has open world map clutter, that's for sure, but new areas and missions open up slowly enough to make the map feel very achievable. Which it is, as the game won't last you longer than 15 hours. Though that 15-hour playthrough is a satisfying romp. You'll be breaking into car lots to destroy vehicles, siege railway stations to lure out bosses, destroy mining equipment, chemical plant installations, and more. It's a shame that so many of these objectives amount to being the same thing.

For so many objectives, you'll be standing around hacking terminals to lower shields or destroy batteries to lower shields, or free hostages, etcetera, etcetera. It feels like each mission is a case of moving towards to location, finding each terminal to hack or objective to shoot, and then moving on again. What I will say is that the environments are small enough to move around quickly, and the objectives are completed swiftly enough to prevent the repetitive gameplay from feeling tedious.

It's simultaneously a dense open world, filled with objectives and things to find, and an oddly sparse one, and this speaks to those old game design sensibilities. There are small objectives and side missions to complete everywhere, in addition to orbs to collect which will boost your agility, strength, shooting and driving. But these items feel somewhat superfluous, at times. Sometimes jumping across rooftops to grab the single orb seen in the distance feels like too much of an exertion, same with many of the smaller side missions.

That's when you realize that this world is distinctly a video game world. People don't live anywhere, civilians are just walking the streets for the sake of it. This is how open worlds were built before developers and gamers became obsessed with realism. It's a world built not to feel real, but merely to exist as a playground for the player. For that reason, in 2019 it feels simultaneously freeing and really odd. Perhaps it's the art style, which dances very close to being realistic, while still having goofy physics and environments.

The game completely changes when we look at the multiplayer portion,  though. While Crackdown 3 is a direct sequel to the original, its multiplayer component, Wrecking Zone, is a wholly new and different beast. Wrecking Zone is the result of those old Crackdown 3 physics demos, which included destructible walls and environments, with buildings shattering from gunfire. It's a completely different game. Playing out with a full set of power-ups (the same abilities you'll get in a fully completed version of the campaign) you jump, double jump, triple jump, and boost through the air while shooting at foes, dashing through buildings, and toppling the environments.

It takes a completely different neon art style, and combat is fast and frantic. Characters move around so fast that a traditional aim-down-sight aiming system wouldn't work, trading it out for locking on to characters instead. You can see when someone has locked on to you, prompting you to dash between cover to avoid gunfire. It feels like an aerial ballet with bullets flying, almost like something out of an extreme version of The Matrix.

But it also highlights how disparate the campaign and multiplayer are. One is the tech demo promise we had years ago, and the other feels like a very quick and somewhat rushed campaign which is there to mirror the original in as many ways as possible. They almost feel like two entirely different titles, conceptually.

But the campaign's old school design doesn't feel like a negative point. Instead, it's a wonderful throwback to how older open world games designed their environments specifically for the player. Buildings often are not buildings, they're platforms made for climbing. Cars aren't just vehicles, they're moving bombs to destroy enemy forces with. Even environmental objects like rocks and bombs can be picked up and thrown, giving you a degree of control over the environment. It's refreshing, after playing so many open world games where I'm unable to interact with so much of the environment.

Ultimately, most of your time in Crackdown 3's campaign will be spent jumping across rooftops and hopping around while shooting legions of bad guys. And surviving these massive firefights, with bullets flying everywhere, feels really good and satisfying. This is a satisfying, fun experience, it's just not amazing. This isn't an essential game by any means, but I'd be lying if I said it wasn't a lot of damn fun. And the multiplayer has some excellent plus points too, though I'm not sure it'll become a multiplayer staple for many players.

Reviewed on PC (code provided by the publisher). You can purchase the game digitally for both Windows 10 PC and Xbox One via Microsoft Store. 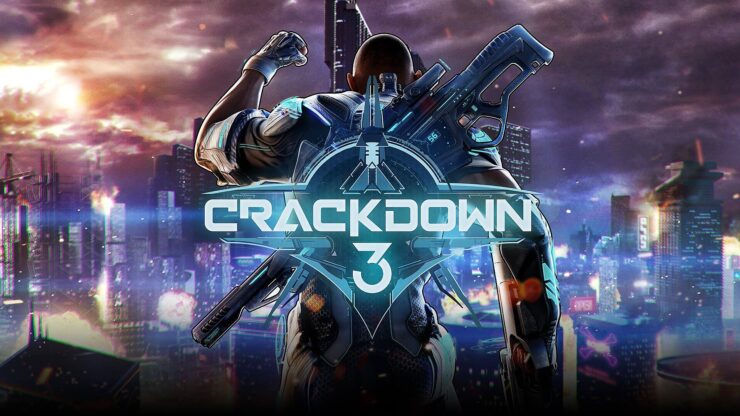 Crackdown 3 is a weird one to review, because it feels distinctly out of date. The delays and changes in direction have resulted in a modern game with design sensibilities that feel over a decade old, but they hold up incredibly well. While not a long campaign, the time I spent with Crackdown 3 was a lot of fun and it's an easy recommendation to fans of the original. Just make sure to play as Terry Crews to improve the experience.