Colorful, a Chinese manufacturer and AIB partner of NVIDIA which has designed some of the most impressive and powerful graphic card designs has released their latest GeForce GTX 780 iGame. Colorful's iGame brand is known to feature some of the best looking heatsink designs along with beefy and non-reference PCBs that only few cards can match. 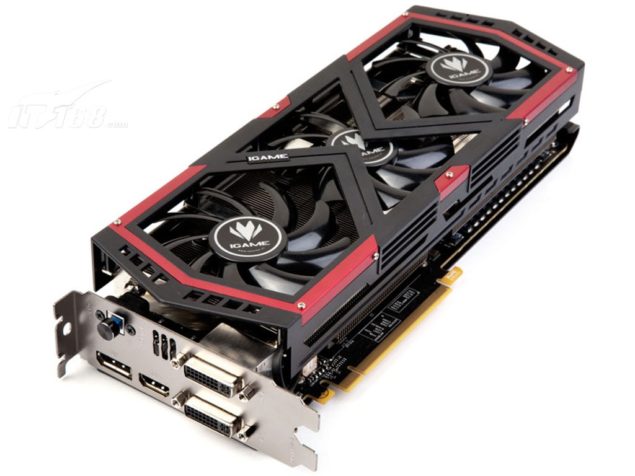 While AMD's Radeon R9 290 series non-reference cards are due for release in Novmeber 2013, the GeForce GTX 780 has many custom variants each of which looks fantastic and can be seen in our round-up here. The Colorful's GeForce GTX 780 iGame is a cheaper variant of their other GTX 780 iGame which ships with the air-kit, paints and a human-size packaging but the new model is a more cheaper and decent model which would retail at a vastly low price compared to the original iGame GTX 780 Kudan.

The first major difference we look at is that the GeForce GTX 780 iGame features a dual-slot design compared to the Kudan. It features a new triple-fan cooler shroud with three 90nm PWM controlled fans and a design scheme that aesthetically looks better than the Kudan. The core clocks are maintained at 1100 MHz for core and 6.41 or 6410 MHz effective clock speed for the memory.

But the specialty about this card is not in its clocks but rather its PCB which is a design marvel featuring the most powerful PCB design ever for a GeForce GTX 780. Its literally a power board equipped to the back of the PCB with a 12+2 Phase design, SPT PCB (Silver Plating Technology), high quality solid state capacitors and MOSFETs. The card is a juggernaut in terms of power and performance only the likes of which some cards can match. But people always want more and Colorful delivers on the promise by selling a separate power board which adds even more phases and voltage to the card for extreme LN2 overclocking. The card is powered by dual 8-Pin connectors which shows a TDP of 250W+.

The GPU can be SLI'd with three more GTX 780's since this is a dual-slot design unlike the triple slot iGame Kudan. The display outputs include Dual-DVI, HDMI, Display port while next to the top DVI slot is a BIOS switch that will activate the store OC profile for faster performance.

For cooling, the iGame GeForce GTX 780 is equipped with two seperate aluminum fin blocks which are connected by two 10mm and four 8mm heatpipes which dissipate heat from the brushed copper base. No word on the prices was said but it would be vastly cheaper than the $900+ GeForce GTX 780 Kudan which is only sold in APAC region.