Treyarch and Activision have finally revealed the Call of Duty: Black Ops 3 Eclipse DLC Zombies map. The events of the latest Zombies saga are set on the forsaken island of 'Zetsubou No Shima'. 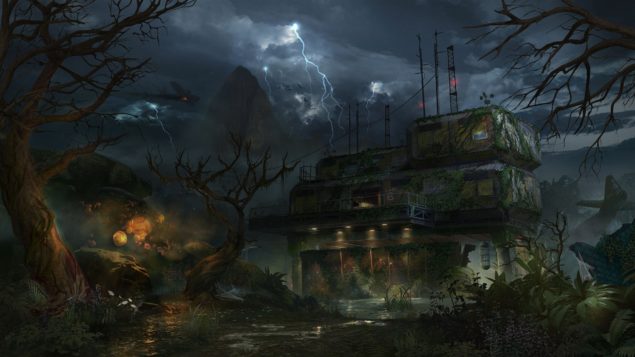 Yesterday we already reported on the Eclipse DLC Pack for Black Ops 3, which will include four new multiplayer maps named Spire, Rift, Knockout and Verge, a re-imagination of the classic Call of Duty: World at War map. Overnight, more details on the latest Zombies chapter for the Eclipse expansion were released, alongside an official prologue trailer.

Check out the official trailer down below:

The game’s official website provided some additional information, which has been included down below. Additionally a visual of the Forsaken island of Zetsubou No Shima was released as well, which you can find at the top of this post.

In the latest chapter of the Zombies experience, the Origins characters find themselves stranded on a remote Pacific island continuing their mission to stop the Zombie apocalypse. There they will face the effects of Element 115 on human, plant and animal biology that has created horrors beyond belief. Explore diverse environments from lush, tropical forest to the stark, overgrown laboratory facility using zip lines or the sewer systems to evade the Zombie horde.

The Call of Duty Black Ops 3 Eclipse DLC pack is the game’s 2nd expansion, and will be released on PlayStation 4 on April 19th. The Xbox One and PC release of the pack has yet to be dated, but will probably release somewhere in May.