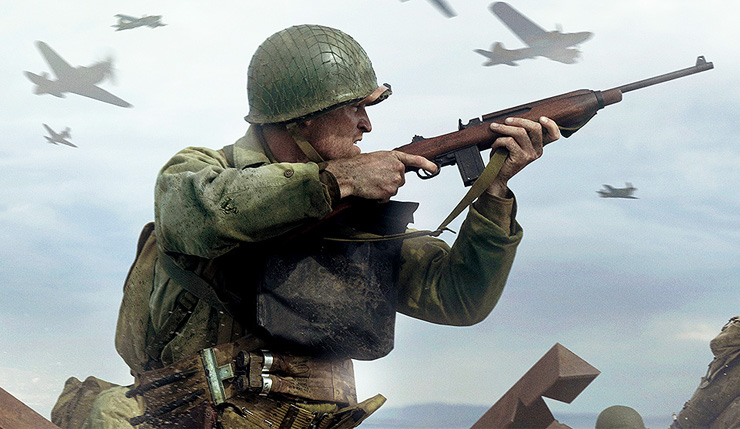 Earlier this week we reported on a fresh round of rumors about this year’s new Call of Duty game -- specifically, that the Sledgehammer-Games-developed title will be named Call of Duty WWII: Vanguard and will take place at least partly during the 1950s. The source of that leak, the YouTube channel ModernWarzone, has since posted another video elaborating on the purported 50s setting, which they claim will be part of a new alternate history timeline in which World War II continued after 1945.

Per our sources, the 1950s leak that we had a while back, is still true -- 100 percent -- and what else is 100 percent true is that this entire game takes place in an alternate timeline where 1945 wasn't the end of World War II. I don't want to spoil any of the campaign besides...World War II is not the World War II we know. This is going to take place in the 50s more than five years after. I can't tell you when the game starts and when it ends, but I do know it will take place after the real-life events of WWII in parts.

Since ModernWarzone posted their latest report, Eurogamer has jumped into the fray, confirming some parts of it and disputing others. Per Eurogamer, Call of Duty WWII: Vanguard is indeed the working title for the new CoD, and they seem pretty confident Activision will stick to the name. That said, they say the alternate history rumor isn’t “quite right,” and that the game will stick to a “traditional WWII setting.”

Hmmm, so, who to believe? Obviously, Eurogamer is a reliable source, but ModernWarzone has delivered the goods numerous times in the past and they seem pretty sure about the alternate 50s setting. Also, I wonder what Eurogamer means about the rumor not being “quite right” – could the 1950s come into play in some way, even if it’s not a full-on alternate timeline? For now, we’ll just have to take everything with a grain of salt and see how things develop.

Activision has confirmed a new premium Call of Duty is launching this holiday season, but platforms and a precise release date have yet to be announced. What do you think? Are we getting a wacky alternate timeline this year or more of a traditional WWII game?