Sledgehammer Games’ Call of Duty: Advanced Warfare is now out and running across PC and both the last and latest-gen video game consoles. Upholding developers’ claim, the game has certainly captivated a huge audience and amassed a lot of praise while running at a native resolution of 1080p on the PlayStation 4 and 1360x1080 on Xbox One. However, like almost all other triple A titles, the latest shooter suffers with some initial bugs and glitches that are hindering smooth gameplay experience and even wiping the entire installed game data off the latest consoles while pre-loading the game. 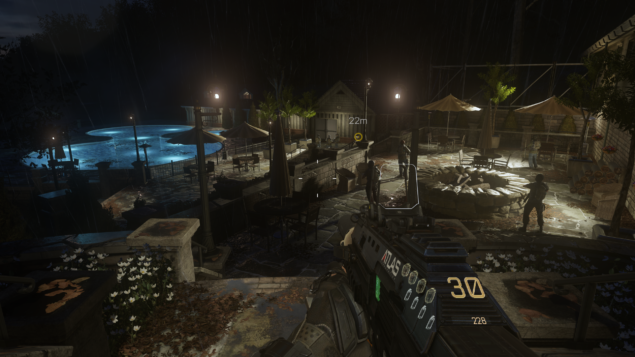 The latest most technically advanced title in Activision’s veteran first-person shooter franchise known as Call of Duty has made quite an impression on fans of the series across all video game platforms. Just like Sledgehammer Games mentioned previously, Call of Duty: Advanced Warfare has been completely optimized on each platform and, unlike its predecessor, it performs remarkably well according to the current offerings of the latest consoles. Proving to be a huge improvement over Call of Duty: Ghosts, the latest shooter is equipped with dynamic in-game environments and highly detailed visuals and graphics.

Nevertheless, just like other major video games, Call of Duty: Advanced Warfare is plagued with some common initial bugs, one of which appears quite annoying and is being reported widely on famous boards like Reddit and NeoGAF. According to the reports, the game suffers from multiple issues while being pre-loaded on both the latest PlayStation 4 and Xbox One consoles. The most common issue is that while the game is being downloaded in the background, the completion percentage gets stuck at a certain point, and if the console is restarted, the download reverts back to a lower percentage each time.

Another common issue according to the reports is that the full pre-loaded game data completely disappears once users start downloading the day one patch for the game, and instead of just downloading the small patch, they end up re-downloading the entire 46GB game data again. The day one update would appear to be stuck at 100% completion but the entire game will continue to download again in the background.

Both the PlayStation 4 and Xbox One versions of Call of Duty: Advanced Warfare is suffering from these download issues, and while an official fix hasn’t been properly released yet, both Sony and Microsoft have acknowledged these issues and have posted updates on PlayStation 4 and Xbox One support forums. Both the platform holders suggest that those suffering from any of sorts download issues should manually delete the whole game and download it again. Sony also added that PlayStation 4 users should make sure their console is running the latest firmware update.

Call of Duty: Advanced Warfare looks fantastic on all platforms. You can check the game's last-gen vs latest-gen screenshots comparison and PlayStation 4 vs PC screenshot comparison to see how the game holds up on all platforms. Also, if you're already enjoying the game, don't forget to check out our list of four must-to-do in-game things.