Microsoft is already offering their fantastic Windows 7 OS at a very good price but they have decided that sometimes they need to sweeten the deal, Microsoft is now offering a FREE Seagate FreeAgent GO 500GB Hard Drive WITH your purchase of Windows 7 Professional, although the license it self costs a mere $200 you are getting a FREE 500GB hard drive whose transfer rate is able to go up to 480 Mbps. 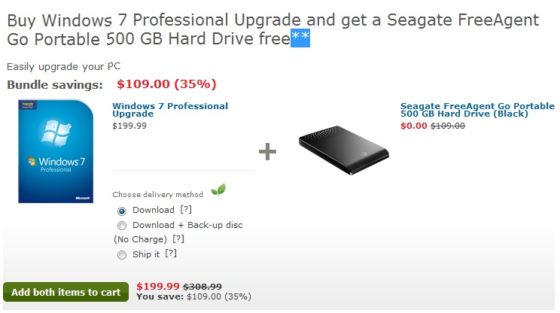 Getting Windows 7 is already a sweet deal this deal has made it even sweeter, considering the portal hard drive is for $109.99 you are also saving on Windows 7 Professional which previously was for $309.99 and is now for $199. So your getting $300+ of merchandise for $199 only, Microsoft really does know how to give people incentive. Although the deal is MOST probably for US / Canadian residents only it's still a very great for those of you who have been looking for a reason to upgrade your current version of Windows 7, Who knows when this deal will expire and if such a deal will ever come back again.