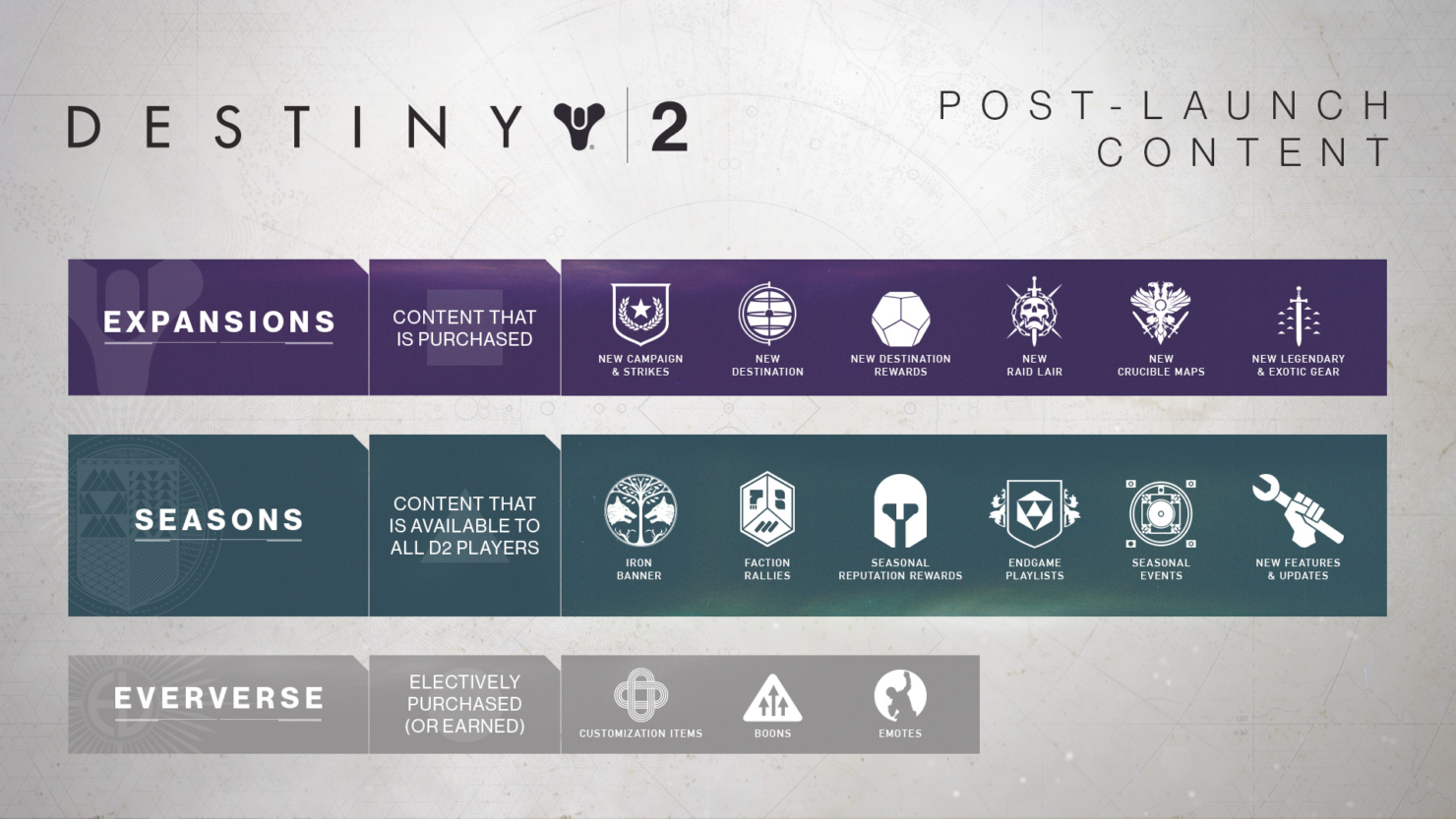 Bungie has detailed the future plans for Destiny 2 in 2018, including free and paid content that will be added to the game in the months ahead.

According to game director Christopher Barrett, the development team wants to set clearer expectations for which content categories will be available to everyone each Season, and which will be exclusive to Destiny 2 Expansions. As such, Barrett writes that ‘expansions’ are “purchasable updates that typically add new Story, Destinations, and Gear, as well as new Crucible, Strike, and Raid Lair content.”

‘Seasons’ will be classified as content that will be introduced to all Destiny 2 players at no additional cost.  In addition, the game director writes that “Iron Banner, Faction Rallies, and their rewards will be available to everyone as part of Season 2. Additionally, going forward we are making a change that new Seasonal rewards from Crucible, Strikes, and Trials of the Nine will be available to all players.”

We’ve included that full list of upcoming changes coming to Destiny 2018 in the months ahead down below:

We recognize that the scales are tipped too far towards Tess at the moment, and Eververse was never intended to be a substitute for end game content and rewards. So, we’ll be making three changes for upcoming Seasons:

There are three releases that we want to put on your radar right now. Later releases will get more specific dates as they get closer.

The following content and features will be available to all D2 players, regardless of expansion ownership.

◦We are expanding the Masterwork system to include armor.

◦We are updating Raid rewards to make them more unique and interesting. They will now feature mods with Raid-specific perks, and we are adjusting the rewards to ensure a Raid item drops from each major encounter. The Raid vendor will also directly sell Leviathan and Eater of Worlds armor and weapons for purchase with Raid tokens and Legendary Shards.

◦We are also adding a new Ghost with Raid-specific perks that has a chance to drop from the Leviathan and Eater of Worlds final encounters. We intend to return to creating more Raid and other activity-unique rewards in the future.

◦Strike Scoring is coming to Nightfall and replacing the current time limit mechanic. The scoring is similar to the Destiny 1 system but with adjustments to emphasize competitive execution of Strike objectives and support for player selectable score modifiers. In February, Nightfall High Scores will be exposed in-game via new emblems and will unlock rewards. We also have plans for Clan and Community High Scores in the works.

◦Work is underway on a full rework of armor and weapon mods. This will focus on reducing redundant mods, more unique theming, and greatly increasing their impact on your power. We are aiming for a February release, but the scope of the rework could push parts or all of it out to early spring. We will be evaluating how Mods play into the Bright Engram economy as a result, because we’re sensitive to pay-to-win outcomes.

◦We are adjusting game mode rules to increase the pace of gameplay and power ammo acquisition in Quickplay.

◦We are adding text chat to the Tower for the PC version of the game.

◦This will prevent players from receiving the same Exotic twice in a row. You may still receive duplicates, just not consecutively.

◦You will finally be able to see the other members of your fireteam on the destination map. No more having to ask your fireteam where they went when they fast travel to another landing zone.

We’re taking the time we need in development of Expansion 2 that will allow us to react to player feedback from Curse of Osiris. In the coming months, we’ll talk to you more about what you can expect to find in Destiny 2’s next story. The team is eager to show you what they’ve been working on.

Independent of Expansion 2, the team will deliver a number of new features that will be released before or during Season 3. Every player of Destiny 2 will receive new content in the following categories…

We want to give players new reasons to play, more variety, and balance improvements. Spring will bring a number of exciting and long awaited features to the Crucible.

◦Beginning with Season 3 we will introduce Seasonal Crucible Ranks. There will be two different ranks for players to pursue:◾Valor – A progression rank that goes up as you complete matches. Winning helps you move up faster, but there are no loss penalties.

◾Glory – A progression rank that goes up when you win and down when you lose. Performance is how you move up here.

◦Private Matches are coming to all players of Destiny 2. Players will be able to invite their friends to play on the map and mode of their choosing.

◦Mayhem will return as a limited-time event during Season 3 and going forward.

◦We are making some changes to make quitting less common and behind-the-scenes security improvements to help improve the overall Crucible experience.

◦Sandbox adjustments based on player feedback and data from the live game. The Sandbox team will share specific changes as we lead up to Season 3.

◦Exotic weapons and armor are receiving a comprehensive design pass to ensure they stand out from the rest of the gear and offer new, exciting, powerful ways to play.

◦Specific vendors will now display a Seasonal ranking. Earning reputation will unlock unique Seasonal rewards and will reset each Season.

◦In addition to the changes that you will see when Iron Banner and Faction Rallies return this month, we will continue iterating on these to make them unique, exciting experiences that you all look forward to.

◦This feature solves the problem of experiencing the same playlist entry multiple times in consecutive or frequent succession for both Crucible and Strikes.

◦We agree with your feedback on the imbalance between Achievement and Bright Engram rewards, and we will be making adjustments to shift more rewards into specific endgame pursuits instead of generic XP grinding for Bright Engrams. We are excited to share the details as soon as we have them worked out.

◦When multi-emote launches, you will be able to choose which emote you have equipped to each of your four emote slots.

◦We are targeting an additional 50 slots to player vaults. We don’t believe just adding more space is a complete solution and are actively working on other changes to reduce load on your vault space.

◦We are adding an Exotic accessory tab to Vault collections so you will no longer need to spend Vault space on Exotic Ships, Sparrows, and Ghosts.

◦In addition to the Tower chat that is targeted for February, we are adding clan chat to the PC version of the game.

◦We’ll be introducing modifiers to add more gameplay variety to the experience.

We are working on a lot more that we're not quite ready to discuss. Expect more on this small sample of items in the future:

Trials of the Nine improvements

The Future of Guided Games

In addition to the changes above, patch 1.1.1.3 is being deployed next week on January 16, which fully removes the DLC 1 Curse of Osiris requirements from seasonal content.

Destiny 2 is available now for PC, PS4, and Xbox One.