VR Zone published a roadmap recently which though doesn't reveal nothing we don't already know about Skylake, does reveal the launch date of the Broadwell Unlocked or 'K' Series processors. Interestingly however we see no mention of the unlocked counterparts. The Unlocked Broadwell processors are launching in 2Q15 (second quarter of 2015) and will probably get a simultaneous release with Skylake. 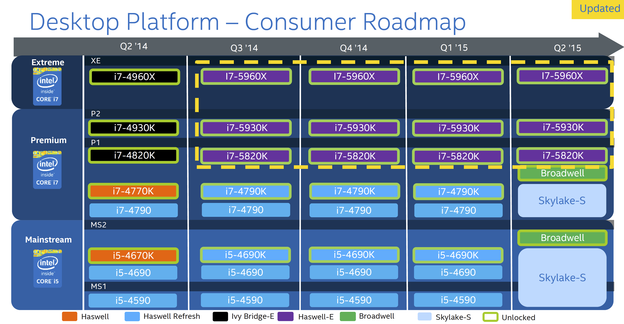 Now I am not really sure what happened to the locked Broadwell processors but because Skylake-S is releasing on top of the same, I doubt we will be seeing them apart from OEMs maybe. It just wouldn't make sense to have Skylake-S locked SKUs on the market alongside Broadwell locked SKUs. Skylake-S will ship in 3 variants, namely one dual core (physical) and two quad cores variants. One of the quad cores will house 64MB of eDRAM and GT4e graphics. We should see some IPC and clock for clock gains on the Skylake-S processors especially considering they are a new micro architecture on the 14nm node. The HEDT Spectrum of Intel's processors will still be occupied by Haswell-E by this time. So summarizing: