The first sampling of Intel Broadwell processors arrived a few days ago in the form of Core M SoC in Lenovo's Yoga 3 Pro Ultrabook. Though initial reviews of the same are somewhat disappointing, since our sample size is very limited, it would be a fallacy to pin the blame on Intel's part. Atleast,  not until more samples arrive (and provided they perform just as 'average'). In the meantime however, the well known reverse engineering publication Chip Works has released its analysis of Broadwell. 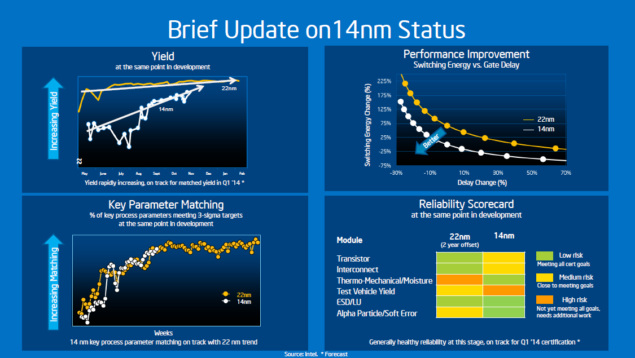 The 'true xx nm' debate has started quite recently or rather entered the spotlight recently. The question arises usually when discussing and comparing other nodes with Intel, an obvious example being TSMC. One of the primary reasons actual distance matters so much is because it is the single most important factor in determining Moore's law. You can employ engineering tricks to double the performance without actually doubling transistor count but then the essence of the law is somewhat lost. Although consumers won't actually care about whether some thing is a true process or not as long as it delivers results.

Anyways, the folks over at Chipworks applied bevel polish to a bare die and analyzed the chip. The first thing they measured was the Transistor Gate Pitch which is more or less the distance between two gates. Since at this level of magnification you work on reference points, the approximate distance between a handful of gates is noted and divided to get the physical pitch (699/10). As you can see, the number '70nm' corresponds to the forecast by Intel in their original slides.  The only anomaly they noted is the interconnect pitch, which measures 54mm on the reverse scale. This measurement is quoted by Intel as being 52mm. Chipworks notes that this could be due to a sampling error or a measurement error as well. Now, some of the stuff they mention is frankly above my pay grade so you would do well to read the full analysis on their page. Note however, that the full technical analysis has yet to be revealed and you will need to cough up cash for that.