While one would be right to associate gaming smartphones with the likes of ASUS and Razer, there are several other brands that have managed to establish their presence in the market. Black Shark, a Xiaomi subsidiary, made quite the splash with the Black Shark 2 and Black Shark 2 Pro, as it offered flagship-tier hardware coupled with a gamer aesthetic for ~$500. Black Shark is expected to release its first 2020 phone in the form of the Black Shark 3. The company's CEO has been building up hype around the device by putting out teasers. Let's take a look at some of them 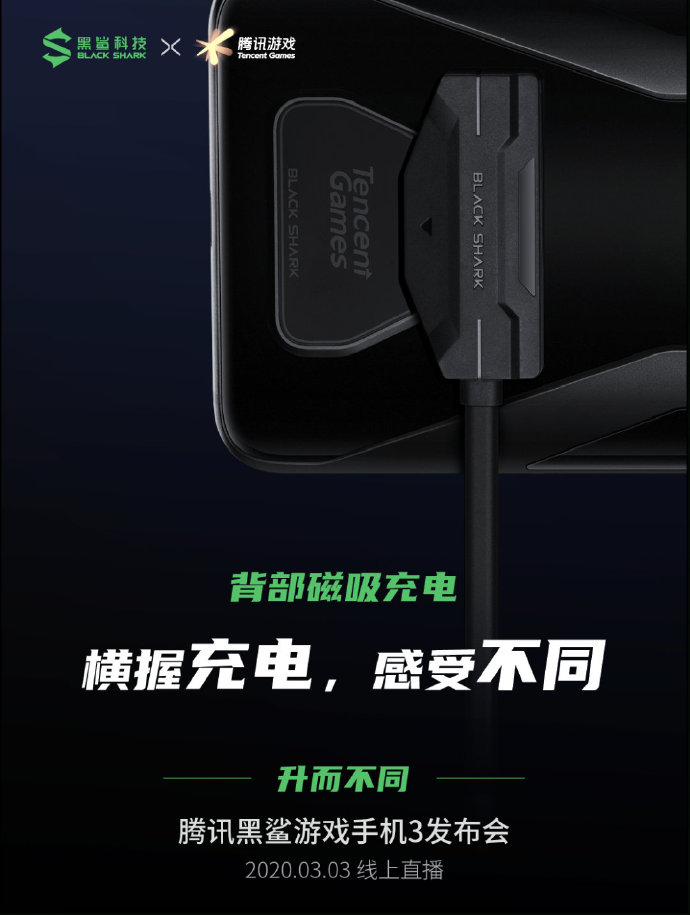 For starters, the Black Shark 3 will come with a magnetic charging port at the side. This approach is unique, and similar to the one ASUS took with the ASUS ROG Phone 2. It comes in handy when one wants to game and charge their phone at the same time. The Weibo post further goes on to say that this unique magnetic charging port will only work with a proprietary charger, which supports fast charging at 65W. If you look closely, there appears to be some Tencent branding as well. We could see some exclusive Tencent games make their way alongside the phone.

Black Shark 3 will split its battery into two halves

Based on another Weibo post by the company CEO, the Black Shark 3's battery will be split into two halved which will be placed on either side of the motherboard. One 'half' of the battery or 2780mAh can be charged in only 15 minutes, the post adds. The number of battery charging cycles on the device has been greatly increased too to ensure longevity. The Black Shark 3 will settle for 90Hz refresh rate QHD+ AMOLED panel instead of a 120Hz one. It is powered by top-of-the-line Qualcomm Snapdragon 865 chipset.

It appears that the Black Shark 3 will also come with a higher-specced Pro version. The former will reportedly feature a 4,720 mAh, while the latter will come with a slightly larger screen and 5,000 mAh battery. There isn't much that can change between the two, considering that both will feature nearly identical hardware. Furthermore, the Black Shark 3 Pro is also rumored to come with up to 16 GB of RAM, something that is unlikely to make an appearance in the non-Pro variant.