Since last week, some lucky Battlefield 1 fans have been able to try out the game on PC before everyone else thanks to the closed alpha. Nothing has been said about a possible closed alpha for PlayStation 4 and Xbox One, but it looks like console users are now also able to get a taste of the upcoming game by DICE.

According to online reports, invites for the Battlefield 1 Closed Alpha on PlayStation 4 and Xbox One have started going out a few hours ago, alongside additional invites for the PC Closed Alpha. If you have an EA account tied to a gamertag or Origin, you would do well to check out your emails, you might have received a very nice surprise.

On a related note, a new screenshot showcasing what seems like the Alps Rush map has surfaced online a few hours ago. The screenshot has been taken by reddit user Ersatz_77, who found it by checking out the Closed Alpha's files.

For the people wondering if it is fake, it is not. I downloaded the alpha files that were leaked and ran a few programs I had to convert texture files over.
If you want to find this file for yourself, check res/ui/temp/deployprototype/deployprototypetextureswin32 574c863ed6c0be93 0b000000000000000000000000000000.TEXTURE and convert to .dds, then to a common image format.
I also want to add that this was found in ui/temp which means this was a temporary file or concepts in it were temporary like commander mode or the classes.

User retroly also shared some additional details on the discovery.

Looks like the character is holding a Lewis gun but may not be indicative of the players actual character.Green symbols on the Map are:
Sniper (crosshair)
Medic(cross)
????(3 men) - Is this a spawn point placed down by a player, or something else?
Can see A and B cap points but not C. 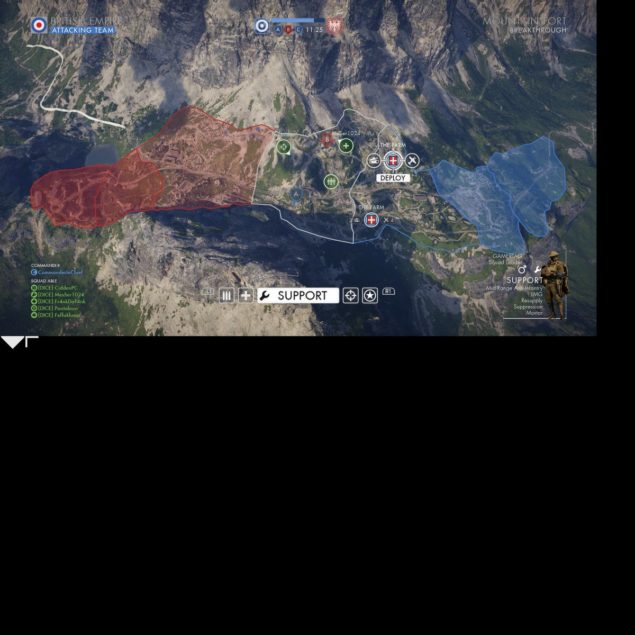 As the image and the details of the Alps Rush map have been discovered through the Closed Alpha, there's a very good chance that things will be different in the final release, so take them for what they are.

Battlefield 1 launches this October on PC, PlayStation 4 and Xbox One.