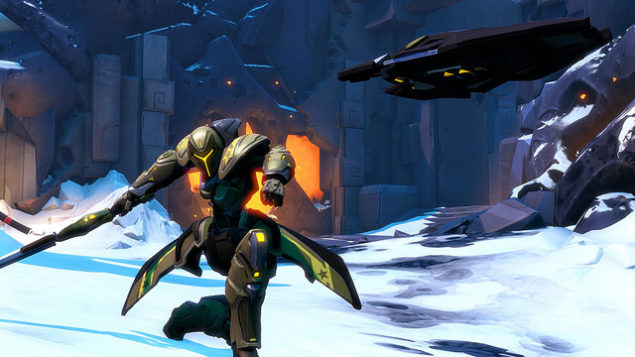 So far we've met 18 of the 25 characters who will make up the initial roster of Battleborn, the first person shooter with MOBA elements from Gearbox. Just as we'd forgotten it existed at all, here are another two of them.

The people who brought you Borderlands, Borderlands 2 and then a string of less enjoyable games have announced two hulking monsters with which to decimate the battlefield: Attikus and Galilea.

They've even released a couple of trailers to show off these new character's abilities.

Attikus was a slave, but thanks to the power of technology he has thrown off the shackle of his oppressors and now wants to kill some stuff.

Now he's not just in possession of brute strength, but intelligence too. We presume that's a deadly combination, but don't have enough experience with either to comment.

Galilea was undercover but got caught and mortally injured by her close friend, Ambra, who apparently instantly regretted her actions. Unfortunately for her, Galilea was too far gone to save - until she was saved. Now she's an unstable immortal struggling to cope with a host of new powers.

Battleborn is coming to consoles on May 3rd, and anybody who takes part in the upcoming beta will receive a bonus 26th character.