Riddle me this, Riddle me that. Who is the last missing villain to the upcoming Batman: Arkham City? The Riddler of course, we saw that the Riddler played a more of a Collectible roll in Arkham Asylum but what you guys didn't hear is what happens when you collect all the riddles. It is about time they confirmed the Riddler as a villain now the roster for classic characters is complete (Except Mr. Freeze) we have now got Two-Face, Riddler, The Penguin, Dr. Strange and The Joker. These villains will definitely make things very interesting in the game. 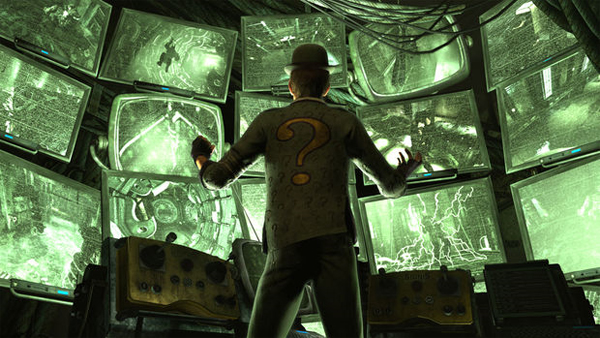 This time the Riddler plays a more active role in the game and actually gives you a challenge, solving the riddlers riddles with a time limit should make things interesting especially when lives are on the line. Rocksteady studios was clever enough to hide a riddle INSIDE the trailer which a comment on YouTube pointed out and even solved.

The trailer flashed words with numbers in them, the words are as follows:

Rearranged they spell out -

If you correlate the numbers to the alphabet, it spells out: I am better than you

Now THAT is a clever way of making people excited for the game but considering what smashing hit the first one was there is no need for people to get excited, given all the attention this game has been given. I can say without a doubt that Q3/4 are definitely the best parts of this year, I mean with Uncharted 3, Gears of War 3, Resistance 3, Batman: Arkham City, Battlefield 3 and even Modern Warfare 3 this is definitely a year of the 3's just like 2010 was the year of 2's. All in all if you needed any more reason to buy this game here it is! If you won't buy a game featuring the Riddler and the other classic Batman Villains you might as well go back to playing Teletubbies the game.