Earlier today Bastion was made possible to play Google Chrome but it has taken the spotlight again when developers of the game "Supergiant Games" announced a DLC headed for Bastion to add a ton of new things to the game to enhance the players experience who just can't get enough of Bastion or wants more content. Strangers Dream is going to be free for Steam users but due to Mircosoft Policy the DLC will not be available for free of course but Supergiant has given the DLC a SUPER LOW price of only 80 Microsoft Points which is only $1. This is probably the cheapest paid DLC in XBOX Live Marketplace right now. 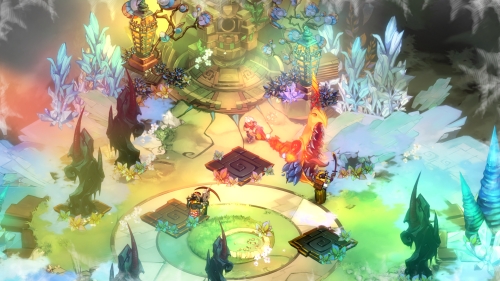 Bastion is a superb indie game which has caught the attention of many players on Steam and XBOX Live and for long fans have been pondering whether there will be any DLC for the game. Supergiant Games has come out and announced an amazing DLC deal for the game and they are taking the Valve approach and making it freely available to all people who bought the game on PC while people who bought the game on XBOX LIVE Marketplace will have to spend 80 Microsoft Points due to policy but considering what you are getting for a mere $1 I would definitely that this could be the best 80 MSP you spend in a while especially if you enjoyed Bastion as much as I and many other players have.

The DLC has been named Strangers Dream and will feature the following:

· The Stranger’s Dream: a new fully narrated Who Knows Where sequence, bigger and more challenging than the others. You’ll gain a bit more insight into Rucks’ backstory as well as the history of Caelondia if you can survive this fight.

· Score Attack Mode: a challenging new way to play through the story! You start at level one with all Spirits and Idols unlocked. Your combat performance is rated for efficiency, and all areas are repeatable.

· No-Sweat Mode: for those who just want to experience the story of Bastion, this mode provides unlimited chances to carry on from where you left off if you’re defeated in battle.

The Steam and XBLA versions of the game will also contain new Leaderboards for the Stranger’s Dream and Score Attack Mode.

but to access the DLC you will have to beat the game at least once and play the DLC Via New Game Plus or your Score Attack play-through.

and here is how you get the DLC:

How to Get the Stranger’s Dream DLC

Xbox LIVE Arcade Users: Start the game on December 14 or later to be prompted to download our new Title Update. You’ll see an option to download the new content from the main menu once you have the Title Update, which also fixes various minor issues in the game.

The Stranger’s Dream DLC will be available for 80 Microsoft Points ($1) on XBLA, which we can’t make free due to Microsoft policy, so it’s about as close as we could get. Though, since you’ll be getting a good chunk of new content, we think you’ll be satisfied with your purchase.

Non-Steam PC Users: We’ll be working with the various online vendors to update their versions of the Bastion installer so that you can download the latest version containing the update.

Google Chrome Users: Our newly-announced Google Chrome version will be getting this DLC as well, in the coming weeks. Your version of the game should update automatically when the DLC becomes available.

Considering what a superb game Bastion is I appreciate what Supergiant is doing and hope they continue their generous contribution to the gaming community.

Bastion Can Now Be Played In Google Chrome