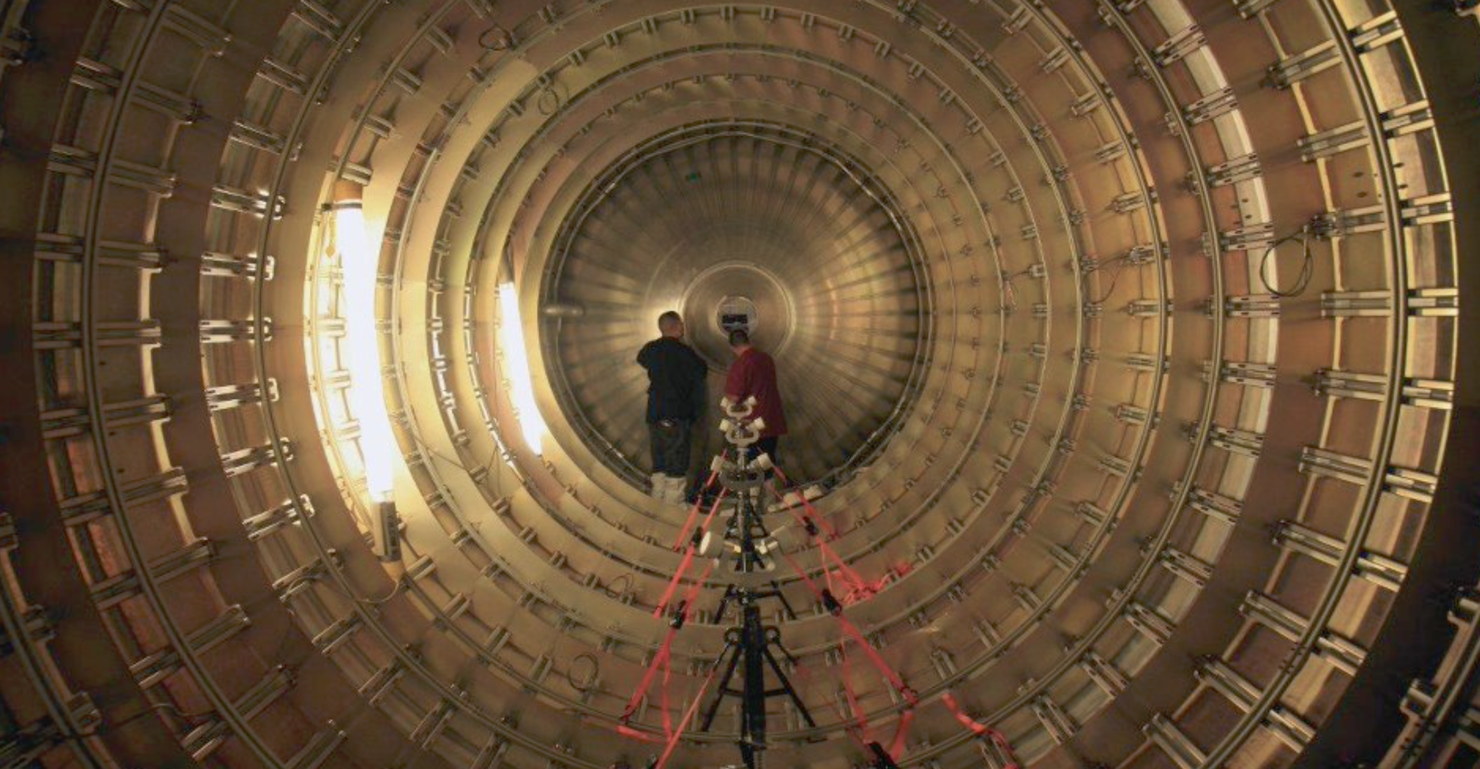 Inside the fuel tank of the Falcon 9. Image: SpaceX

The prototype which SpaceX tested last week was the third vehicle to successfully lift off and perform a complex landing flip maneuver mid-air. However, it was the first that landed in one piece, with the other two being unable to generate sufficient thrust to counter gravity.

Its predecessors, SN8 and SN9, crashed due to different reasons. While the latter's crash was due to a programming decision that SpaceX made – an error that Musk admitted – the former crashed due to insufficient fuel pressure in the vehicle's secondary tank located at the top. Rocket tanks need to maintain their internal pressure as fuel exits them, otherwise the engine cannot generate stable thrust. 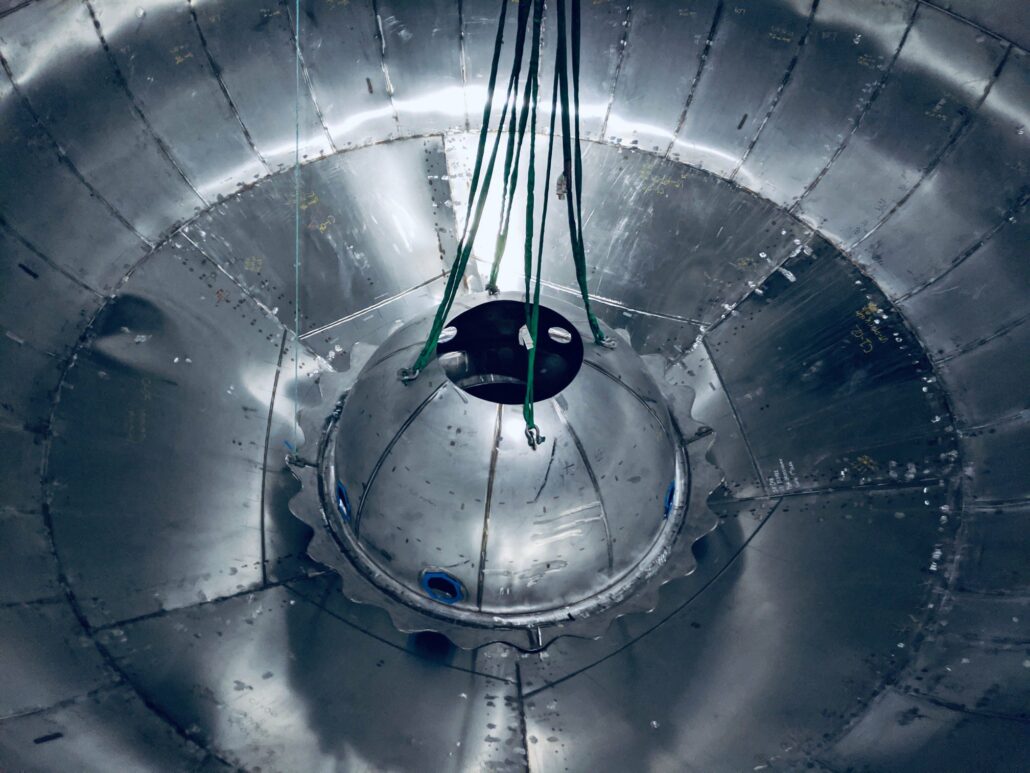 A view of a fuel header (secondary) tank, one similar to the one that caused SpaceX's Starship SN8 to crash as it attempted to land. Image: Elon Musk/Twitter

Prior to SN9, SpaceX used autogenous pressurization for maintaining tank pressure. This involves taking exhaust from Starship's Raptor engines and feeding it back into the tank to ensure a vacuum is not present.

However, after the crash, the company switched to using Helium for pressurizing the tanks, similar to the Falcon 9. Musk confirmed this in a Tweet, but cautioned that this was not a long-term solution as of yet. An inside view of the Falcon 9 second stage's Liquid Oxygen tank below shows how this is done. At the bottom of the frame are two black composite overwrapped pressure vessels (COPVs) that inject helium into the tank to prevent the fuel from floating away from the bottom of the tank in the vacuum of space. Also visible are what engineers dub as 'baffles' - something which we'll explain below.

The decision to switch to Helium is the primary reason that SN10 failed to land properly. Musk confirmed this in a Tweet yesterday as he explained that some of the helium used for tank pressurization might have made its way inside the Raptor engine. This would have reduced thrust generated during landing, causing SN10 to land at a velocity of 10m/s.

For a vehicle that is nearly 12 stories tall, the force that such a velocity creates during impact with the ground is unlikely to be absorbed by Starship's landing legs. However, the legs themselves might not have stood a chance even if the tanks worked normally since three of them did not lock in place after deploying during the landing attempt. 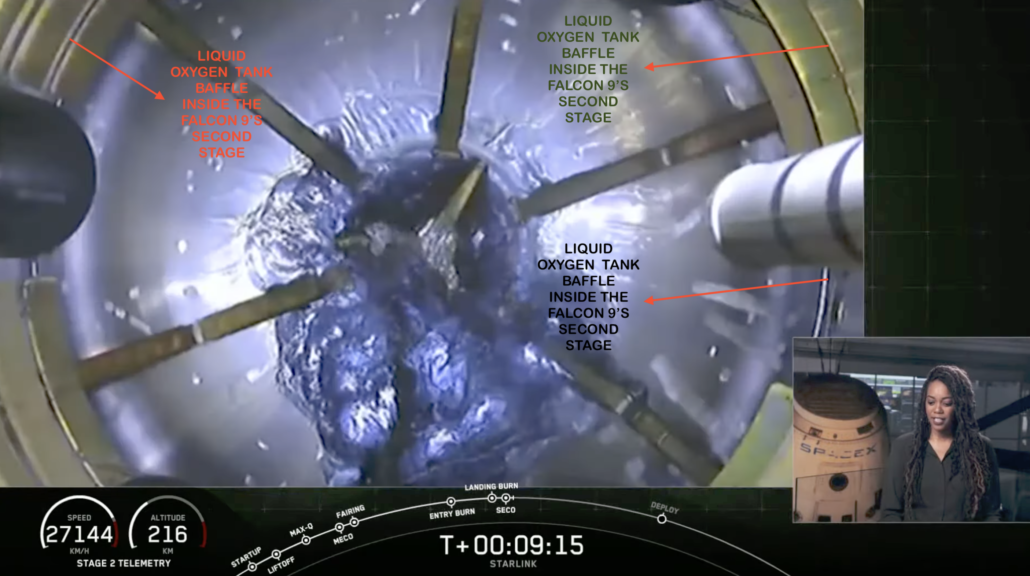 The Liquid Oxygen tank baffles inside the Falcon 9 second visible during a Starlink launch in April last year. Image: SpaceX, edited by Wccftech

It appears as if there was some methane sloshing inside SN10's secondary fuel tank, resulting in some of the helium making its way inside the system. Nearly all rocket tanks (and some others) have structures inside them called 'baffles'. These counteract the forces which cause the liquid to move violently inside the tank and percent sloshing.

According to Musk, while they did manage to prevent methane from moving around inside Starship, they might also have acted as a 'bridge' for gaseous methane above the fuel's liquid surface to make their way inside the engine in the form of bubbles.

Screen channels inside rocket tanks act as conduits for fuel to guarantee adequate flow for engine re-ignition - especially after a flip maneuver is performed. Images of the Falcon 9's first stage tanks have shown the presence of such channels, which work together with the second stage pusher to drive fuel to the bottom of the first stage's tank for re-ignition.

It's possible that Musk is speculating about bubbles making their way inside the Raptor, as he recalls a similar problem that SpaceX faced with the Falcon 1.

SpaceX is currently installing propellant tanks at its launch pad in Boca Chica, where the next Starship prototype - SN11 - is currently waiting its turn to clear pre-launch tests. Musk hopes to send an uncrewed mission to Mars by next year and is targeting high-volume orbital flights in 2022 as well.