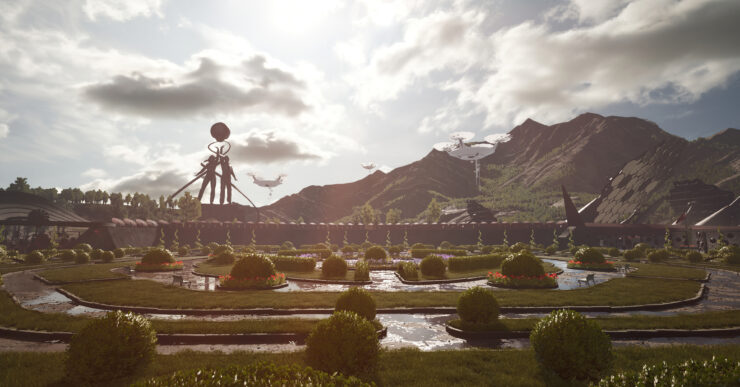 Atomic Heart is alive and well, as testified by the recent mini-boss gameplay video released by Mundfish.

That said, there's still a lot we don't know about the intriguing open world shooter game set in an alternative universe during the Soviet Union's 'high noon'. Today, though, we're happy to bring you another Q&A with the developers of Atomic Heart that will hopefully shed some light on topics such as game length, release date, and potential Epic Games store exclusivity concerns. Enjoy!

In our previous interview, you told us more information on Atomic Heart would be available throughout 2019, but that didn't really happen. Why the change in plans? Were there any particular delays to deal with?

There wasn't any specific delay or reason to postpone some media. We just wanted to be sure we have enough content to plan our posts in advance. Please stay tuned, we have so much to share now.

Now that you have to work remotely due to COVID-19, how did your workflow change? Do you anticipate any further delays in production?

The pandemic did not affect the development timeline - all the work can be done remotely - we can even say that due to the studio switching to the remote mode many interactions became more transparent and productivity improved. Nonetheless, the COVID-19 pandemic forced us to make adjustments to the filming schedules for cutscenes - this is the biggest impact the pandemic has had on our production schedule. Air travel ban and customs issues have also restricted us from receiving important items, and some specific equipment was not delivered on time. Currently, we are returning to the filming and hope that there won’t be a second wave of pandemic and another quarantine.

In our chat in early 2019, you said there would be 'PvP regions'. However, we've since heard you are planning to release the game with the single player campaign mode only. Can you confirm that multiplayer will be added later and if so, can you expand on how it will work?

As of right now, the multiplayer aspect of the game is on hold. We focus on delivering solid single player campaign with polished mechanics and a compelling story. In regards to PVP areas and multiplayer in general, this a question of post-launch support for the game. And we will definitely support Atomic Heart after launch.

Will Atomic Heart feature a day/night cycle? If so, will that influence the world in some ways?

We won’t have a full transition to the night - only to twilight. We have several dungeons (few big ones and some not so big) in our game, many of which are dark, And in dungeons, such dark gameplay is quite appropriate, but outside them, it adds neither to the setting nor to the gameplay. We may even say it does the opposite. Our open-world looks great during the day and it correlates with the positive mood of the USSR of that time. From a director's point of view, this is much better. The contrast between the transition from the positive upper world to the harsh and dramatic events of the underground is giving you much more than just a simple day/night cycle for marketing sake.

How long will it take on average to complete the game?

It will take ~20 hours to finish the main story. But in order to properly understand it, you’ll need to do finish the game several times.

Can you confirm whether Atomic Heart will be a timed Epic Games store exclusive on PC?

Our strategy is to allow as many players as possible to get acquainted with the world of our game, with our product.

You were previously targeting a simultaneous release of Atomic Heart on PC and consoles. Is that still the case? If so, are you going to release on next-generation consoles right away too?

We are still aiming at a simultaneous release of the game. And yes, we are planning a release on the PS5 and Xbox Series X consoles.

What do you think about PlayStation 5 and Xbox Series X now that we have the official specifications? Will they be able to achieve comparable raytracing to what we've seen in GeForce RTX?

As we stated before we are indeed planning a game release on the next generation of consoles. It is hard to tell yet, and we won’t undertake to compare the versions and ray-tracing implementation yet - perhaps we can discuss this more later. But the game is designed to be future-proof and will look great on all platforms.

In a recent chat with IGN, you mentioned that the game won't have loading screens on PlayStation 5 and Xbox Series X due to their SSDs. Where does that leave the PC version of the game if the user doesn't have a Solid State Drive in his/her rig, though?

Even on PC without SSD as well on current-generation consoles the game will have no loading screens during travel in the game world.

Nevertheless, it requires some hacks from the technical perspective, and some transitions will be longer than on next-gen consoles or high-end PC with last-gen SSDs.

Are you going to use DirectX 12 Ultimate's features, such as DXR 1.1, Variable Rate Shading (VRS), Mesh Shading and Sampler Feedback, in Atomic Heart? Which one excites you the most as a developer?

We don't have such plans. These features are very fresh and still not widely used in modern game projects. As you know we're using UE4 and in most cases, we rely on its currently supported rendering features. The mentioned DirectX 12 Ultimate's features are not yet supported by Unreal Engine. Implementing them on our own end would take us a significant amount of time which is unacceptable in the current stage of development. But once it gets support in UE4, we will try it for sure.

Since the stunning Atomic Heart RTX demo, how did you optimize and enhance visuals and performance in the game, particularly with regards to RTX and DLSS?

We're working closely with NVIDIA to make the most beautiful game world you've seen. Solutions we've shown you previously are ray-traced reflections and shadows. They stay for sure. Currently, we're working on the implementation of DLSS and other features recently made possible due to RTX and DX12. We're intrigued to try out more features but players will still be able to play Atomic Heart on non-RTX hardware.

Finally, the big question: will Atomic Heart be available before the end of 2020?

Good try! We don't want to release a half-baked product. We will share news on the release date as soon as we feel it's achievable. To our fans and supporters out there: we can assure you that the development is in full force, and we are eager to show you something new soon. Stay tuned for future updates.