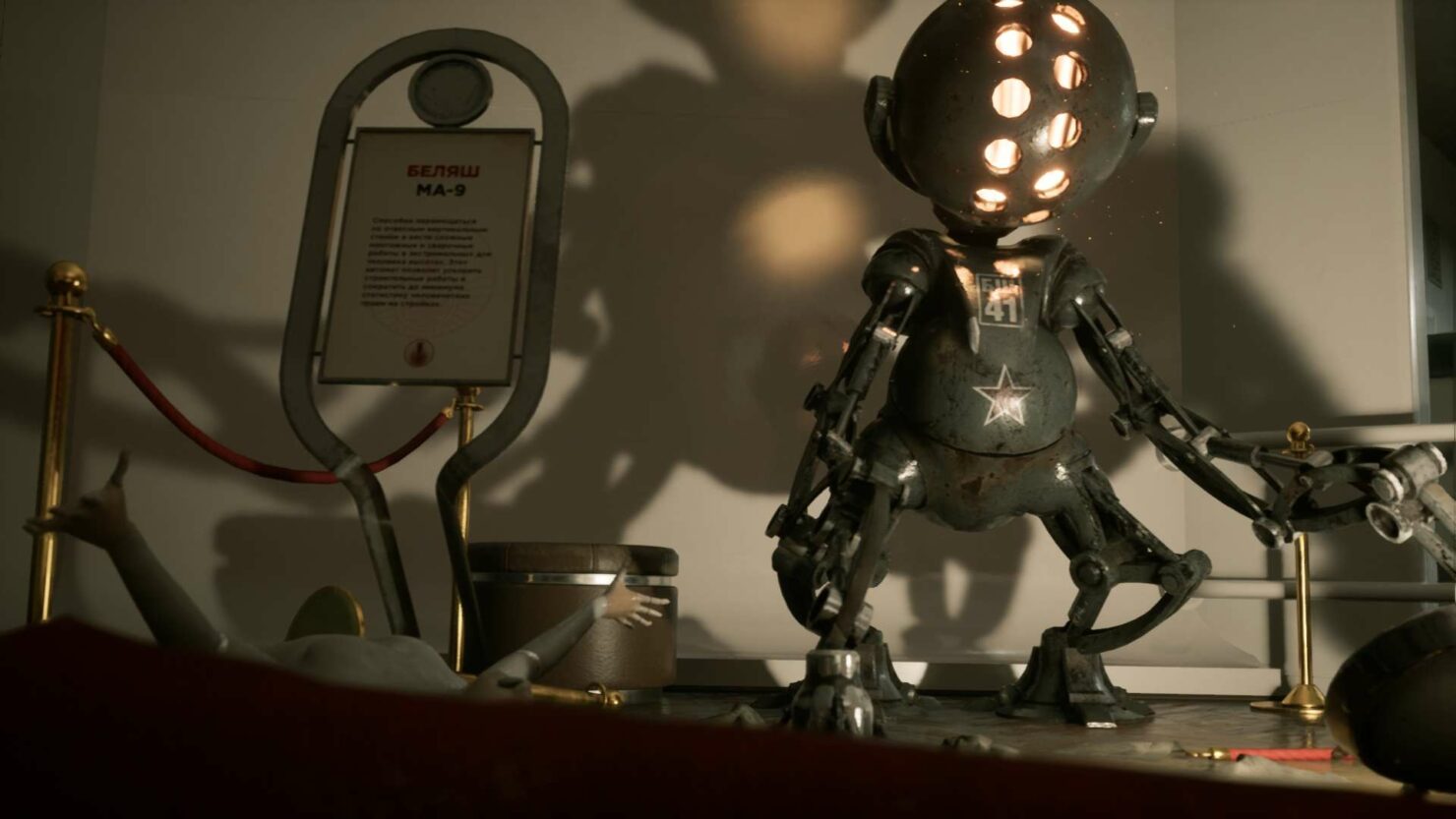 Atomic Heart is not only one of the most intriguing independent games we've seen recently thanks to its eerie environments set at the 'high noon' of the Soviet Union, but also one of the most beautiful and technically advanced titles with extensive use of the NVIDIA RTX (real-time raytracing) and DLSS (deep learning super-sampling) technologies implemented in the GeForce RTX graphics cards.

As eager as we are to learn more about this first-person adventure game, we reached out to Russian developer Mundfish to interview CEO Robert Bagratuni on Atomic Heart's mechanics and technical features. We learned, among other things, that there will be 'PvP regions' in Atomic Heart and the folks at Mundfish are planning to launch the game simultaneously on consoles (PlayStation 4 and Xbox One), while potential DLC plans are already under evaluation.

On the technical front, Bagratuni highlighted being blown away by NVIDIA's real-time raytracing for delivering 'jaw-dropping' lighting effects and by DLSS for enabling TAA-level image quality with up to 2x performance increase.

Without further ado, you'll find the full interview below, just after the gallery of screenshots and the latest tech demo of Atomic Heart showcased at CES 2019 last week. By the way, PC gamers can already find the game's system requirements on Steam.

After seeing the Atomic Heart trailer, some folks have questioned your ability to deliver such an ambitious project, given your background. What can you say to reassure gamers? How big is the development team working on the game?

Thanks for asking this question. We’re frequently asked that and this question is quite appropriate. I’ll try and explain why you don’t have to worry. Our team consists of 30 members at the moment, and we’re expanding further. Development team – experienced developers, who worked in large game companies like Ubisoft, – they are experts in making AAA games and complex subsystems such as online multiplayer, AI ecosystems, analytics and scoring systems and other complex and high-tech tasks. Also, we’re working closely with Epic Games and we stay informed about all the latest technologies and UE4 features before they actually get publicly available. Our partners from Nvidia help us in graphics and performance optimization. So, for all the reasons described above our game is being developed at the highest technical level.

Have you decided whether to self-publish the game or partner with someone?

At this point, we have a number of offers from publishers but we haven’t taken the final decision. The most important thing for us is to maintain independence in development issues, creativity and IP. Generally speaking, we have nothing against working with a really interesting and strong partner but we have to be sure that both the game and players would benefit from it. This is our top priority.

Did you consider multiplayer at all during the development?

Yes, we considered multiplayer, and it’s built in the code. In Atomic Heart, there are PvP regions where you can play against other players. But the key focus of the game is on the adventure-type story. We’re moving in this direction now, solving complex issues along the way.

What was your biggest influence when it comes to the game's mood and overall mechanics? Bioshock, Metro or something else entirely?

Bioshock is a legendary game which we love.) Metro series is also among our favorites and we played all the parts. Of course, we’ve been inspired by Bioshock and other games too, but in the first place, the ground for creativity in Atomic Heart would be the works of Soviet science-fiction writers, such as Stanislaw Lem and the Strugatsky brothers. In our game, there’s a lot of humor and sarcasm in Harry Harrison’s writing style. There are even some surreal parts related to the inner world of the Hero. To be more specific, our story is more like a “Black Mirror” episode in the Soviet Union. That’s what we're aiming for in terms of storytelling.

How big is the playable area in terms of how long it would take to cross it? Is the world seamless?

In the nearest future, we intend to significantly increase the publicity level of the company by launching the developers’ diaries. In these diaries, many details about the game will be revealed which will contain the answer to this question as well. Now I can say that there will be many different biomes, with a wide range of content. I’m sure players will love what we’re doing for them.

Will there be any DLC/expansions coming post-launch?

There will be DLC, but we don’t plan that far ahead just yet. We want to polish everything that’s been planned in the basic game in the first place. It’s a big task in itself and let’s feel optimistic about the future!

You've released Soviet Lunapark VR on Steam. Is there a chance to see a VR mode for Atomic Heart at some point?

Soviet Lunapark VR doesn’t exist now in the form it was presented on Steam VR. This decision was taken because we weren’t satisfied with the quality of user experience on standard VR. All the ideas we wanted to put in the game hit the physical restrictions of VR equipment and it was agreed to turn to free-move VR. Soviet Lunapark continues to function and is currently presented as a VRArcadе with an option of wireless free movement (with a VR backpack). It’s a large playground measuring 400sq.m. – that’s where the game achieves its full potential! For me as a VR fan, it was a difficult decision but the result turned out incredible! At the moment this attraction is available only in Moscow, but in 2019 it will be extended to a range of other big cities – London, Dubai, Berlin, NY and others. All SL users on STEAM can enjoy a free pack of Atomic Heart in compensation for the inconvenience. As for support in Atomic Heart – there are no such plans now. Maybe as we get closer to the game release, some elements of the game will be available in VR, but now it’s hard to say which and in what form.

The official website also lists PlayStation 4 and Xbox One versions of the game. Are those coming at the same time or later than the PC? Also, do you believe you'd be able to maintain the same (more or less) graphical splendor on these consoles?

Our team is focused on making the release simultaneous. More detailed information will be available in the second quarter of 2019.

Your NVIDIA RTX demo was one of the most impressive at Gamescom 2018. For how long have you been working on it? Was ray tracing complex to enable in Atomic Heart?

Doing real time ray tracing sounds like a daunting task on the surface, but the reality was much less intimidating. When we found out there was a special branch of Unreal with ray tracing support we were excited to see how it would improve Atomic Heart. NVIDIA provided us with access to the branch and the tools we needed to execute. They were there to help us when we needed it. The integration went fairly smooth considering it is running on new hardware and a new API and doing something that could never be done in real time before. The results blew us away.

The big talking point on the Web now is the performance hit that comes with ray tracing even on high-end GeForce RTX cards. Can you reveal how Atomic Heart is handling RTX features right now in terms of resolution and frame rate? Do you expect that optimization can significantly improve performance?

Unfortunately, some people seem preoccupied with frame rates, but it should not overshadow the fact that real time ray tracing in games is a big, big deal for developers and it was impossible to do until just recently. It is way too early in our development process to be focusing on frames per second and performance. Plus, we are using ray tracing for three elements: reflections and refractions, shadows and ambient occlusion. Even with all that ray tracing, the performance is already good, and we expect further improvement as we progress through the development to release. We are working very closely with NVIDIA on optimising the game. Atomic Heart also will use NVIDIA DLSS so we are seeing performance improves from that, also.

Since you'll have different raytraced features, I'm wondering which one stands out the most in your opinion. Also, will you allow players to activate or deactivate them individually in the settings panel?

Ray tracing models the real-world behavior of light and no one would dispute that it is considered the definitive solution for realistic and lifelike lighting, reflections, and shadows. We are using it for realistic reflections, superior quality shadows and ambient occlusion. For our game and the environment it is set in, we determined that those would be the most impactful ray tracing features.

We have not finalized the settings menu yet. Again, it is early.

Can you explain your implementation of NVIDIA DLSS in Atomic Heart? How hard was it adding DLSS into the game?

We decided to implement DLSS because it can improve overall performance in games while delivering a higher quality output than traditional anti-aliasing methods like TAA. Sometimes the performance increase can be as much as 2X, but we are still tuning it for Atomic Heart. Using deep learning and AI to intelligently apply image enhancement and smoothing to object edges is a novel concept and a great way to adapt AI to games.

As we are using UE4, so many of the requirements for DLSS, such as the generation of motion vectors and that the UI can run at a different screen size to the rest of the game were already supported by the game engine. That simplified things for us. Then we just had to tag the right buffers and provide a training build to NVIDIA for data verification and network training. NVIDIA creates all the neural network training and supplies this back to us. This is generated on supercomputers at NVIDIA HQ.

Does it improve image quality compared to TAA? What kind of performance improvements have you seen after enabling it?

The image is very close, slightly better in some areas and slightly less in other areas, but overall very, very close. But using TAA is already a trade-off on quality giving a somewhat blurred image at any resolution. The expectation is that the image quality will not only be as good or better with DLSS, but the performance tradeoff to get there is a lot lower. It also uses artificial intelligence and gets better and better over time.

After noticing that the GeForce RTX cards are equipped with both ray tracing (RT) cores and Tensor cores for DLSS, I surmised that the optimal solution for a game developer would be to implement both raytracing and DLSS at once as they are clearly meant to work together. Do you agree? In your opinion, are we going to see several games adopting both as you do with Atomic Heart?

That question can only be answered by the individual developer. For Atomic Heart adding both at the same time is the best way to go. All games can benefit from DLSS, the image it produces is great and the performance cost is a lot better than anything out that is comparable. You get the same IQ improvements but the performance penalty is substantially less. And ray tracing delivers jaw-dropping lighting effects. It is truly going to change the way games are created.