Roses are red, violets are blue, if you're AMD then ASUS is blaming you. The ASUS ROG Strix Radeon RX 5700 Series were released as some of the most overbuilt and expensive versions of the Radeon RX 5700 Series graphics cards but that didn't stop them from facing harsh criticisms over what was accused of being 'quality control' from reviewers like Hardware Unboxed due to lackluster cooling performance, and rightfully so.  To further compound these issues received from many reviews a quick trip to Reddit could bolster these reports with users also weighing in with similar issues.

But, according to ASUS themselves, it's not quite the quality control issue some thought it to be. Thanks to a post on their ROG website, and kudos to Mark of Overclock3d.net, we learn that the problem occurred due to following AMD's guidelines for mounting pressure on the RX 5700 Series of graphics cards. AMD apparently recommended between 30-40 PSI, but after gathering the complaints and going back to testing ASUS found the optimal pressure to be between 50-70 PSI for their ROG Strix cards.

ASUS has updated its blog post and removed the images we have posted here as well as changed the wording of stating they followed AMD's recommended guideline and it now reads "AMD's baseline recommendation" We are leaving the original image and the original quote in the article. If you want to see the updated statement feel free to follow the source link at the bottom

Interestingly in their analysis, they go on to point out DIY approaches that have become very popular are putting way too much pressure on the Navi die. According to their reporting, they have since updated the screws they're using resulting in the increased pressure and improving heat transfer between the die and heatsink. All units shipped from January 2020 forward will be using these and effected users who already bought their cards can contact ASUS for getting them to upgrade the existing screws. 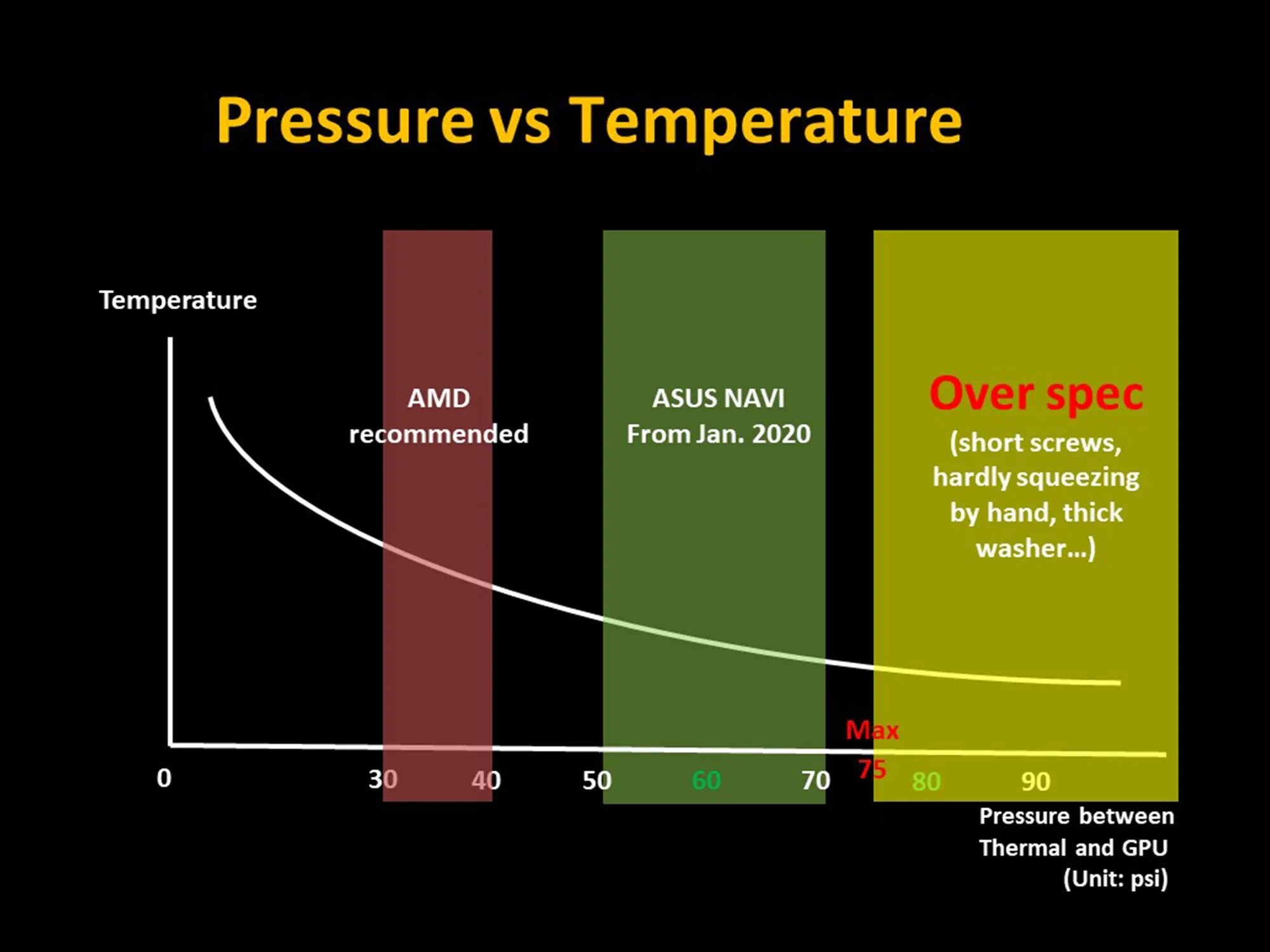 As a result, all ROG Strix Radeon RX 5700-series graphics cards shipped from January 2020 forward feature new screws that increase cooler mounting pressure to 50-60 PSI, resulting in improved heat transfer from the GPU to the heatsink.

Of course, we are committed to supporting our customers. We would like to offer the same benefits of the new mounting screws to users that have already purchased an ROG Strix Radeon RX 5700-series graphics card. If you already have one of these cards and would like it modified to use the new mounting screws, please contact your nearest ASUS service center starting in March of 2020* and we’ll happily perform the upgrade for you.

To determine whether your graphics card is eligible for this free upgrade, please consult the following table of model numbers. For further assistance or information, please contact your local ASUS customer support team.

The blog post this all came from was published on Valentine's Day 2020 (Feb 14th) just a couple of days after the internet was swirling with complaints regarding Radeon's drivers and issues many people were still having with Navi based graphics cards. Following the chip makers guideline is what you would imagine that board makers would do, and doing so wouldn't result in issues like this. But that seems to be the case according to ASUS.

When board vendors rely on these specifications for design purposes as well as the chip makers drivers for their products to be successful it seems that the communication lines would be a bit wider. And it's not to go unmentioned that the ASUS R&D team perhaps should have experimented a bit more before pushing out the most expensive version of a product that clearly wasn't fully tested. Still no official word on the poor memory cooling performance of the original TUF Gaming RX 5700 Series.