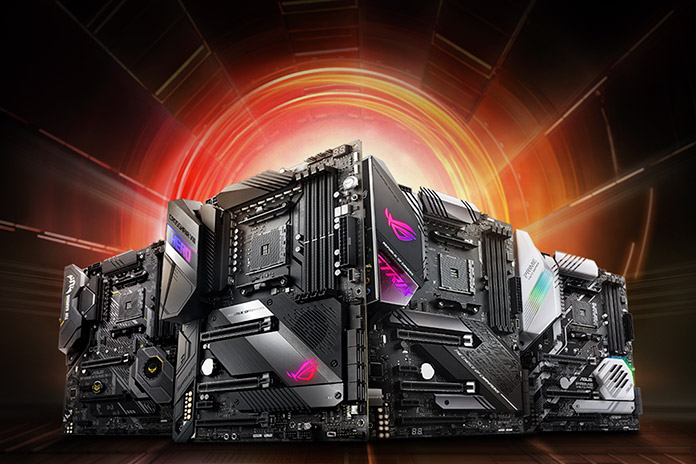 Asus has made a quite good entry into the X570 with their newest motherboards. I have to say that their motherboards look very nice and they have continued working with EKWB to add a water block on their motherboard. That feature definitely is a great feature for all enthusiasts who want to make a build that has an open loop.

The Formula is the flagship of the X570 fleet, primed to be fitted into premium systems with custom liquid-cooling loops and push Ryzen to its limits. Whether you’re looking for utmost functionality or pure aesthetic expression, this board sits at the apex.

It would look fantastic just displayed on a wall, let alone in a high-end build. The liquid-fueled centerpiece is the mighty CrossChill EK III water block, a product of our ongoing collaboration with the cooling masters at EK Water Blocks. The block is tapped for standard fittings to ease its installation into an existing loop, and it sits atop one of our biggest VRMs to date.

The 16 PowIRstages are accompanied by MicroFine Alloy chokes, with each stage capable of delivering a whopping 60 amps. There’s more than enough power to take a CPU to its limits. The ProCool ATX and eight-pin power headers with solid-core pins and metal covers ensure the board and VRMs get stable, uninterrupted power.

On the integrated, I/O shield rests a LiveDash 1.3” OLED display, a handy tool for quickly getting information at a glance, like checking the CPU speed, keeping an eye on BIOS Flashback status, verifying POST codes in case of trouble, or monitoring the motherboard’s copious collection of sensors. Naturally, you can also roll your own custom graphics or display text. Monitoring is a prime aspect of managing a liquid-cooled system, and the Crosshair boards’ dedicated coolant flow rate and temperature headers let you track key metrics. A trio of dual-mode chassis fan headers stand ready, should extra cooling become necessary. Additionally, the Node connector lets attached components communicate their own readings and take control of board features.

Networking aficionados will find the Formula fulfills their needs and then some. There’s an Intel Wi-Fi 6 adapter ready to send radio waves at multi-gigabit speeds, and next to the Intel Gigabit Ethernet chip sits an Aquantia 5G controller with much higher throughput for moving huge videos and other files. The SupremeFX S1220 codec and its associated circuitry offer audiophile-grade audio reproduction. An ESS Sabre DAC and amp powers the front panel audio output, ready to drive high-impedance hi-fi headphones without breaking a sweat.

As befits the top model in the lineup, the Formula is reinforced by a metal backplate and SafeSlot treatment for its main PCIe x16 slots. The chipset is covered by an expansive heatsink, while the dual M.2 slots each have their own dedicated heatsinks, sitting underneath the board’s ROG Armor. Alongside headers for standard RGB LED strips, there are ASUS-developed Gen 2 headers for addressable strips. These headers can autodetect the characteristics of connected devices, allowing the software to easily tweak effects to match.

For added customization, FlexKey lets you remap the reset key to switch Aura Sync or off, boot directly into the UEFI, or Safe Boot with UEFI defaults. The Formula also comes with a particularly generous allotment of USB ports: 12 at the back panel, and another 9 available through internal headers, including Type-C connectors. You can ditch your USB hub now. They also offer this version without a water block.

You’d be forgiven for presuming that the biggest motherboards are the natural choice to take a CPU’s clock speed as far as it can possibly go, and perhaps shatter some world records in the process. That’s not always the case, though. The memory controllers inside modern CPUs are complicated, and trying to use four DIMMs in a board at maximum speeds can be challenging. A two-DIMM configuration is often the best path to memory tuning victory as it eases the load on the RAM controller and shortens the length of PCB traces to the slots.

The stage is set for the ROG Crosshair VIII Impact. The Impact is a compact, high-performance motherboard based on the mini DTX form factor, which is slightly taller than Mini-ITX. The unusual dimensions were deliberately chosen to take advantage of unused space in Mini-ITX cases designed to support two-slot graphics cards mounted directly to the motherboard. The extra real estate helps us squeeze in additional features along with a VRM that uses TDA21472 power stages in an 8+2 configuration. Each stage is capable of pushing 70A to better feed power to high-end CPUs.

To cool the VRM effectively as you turn the MHz up higher, the Impact uses a heatsink with an integrated fan ready to blow a breeze through the fins. A heat pipe connects the VRM sink to a full-size aluminum backplate, spreading out heat quickly and evenly, compensating for limited airflow in smaller chassis. Along with the standard CPU fan connector, the Impact comes with dedicated headers for a pump and two radiator fans, along with headers for monitoring coolant flow and temperature.

We didn’t skimp on features to fit into a smaller footprint; the Crosshair VIII Impact mostly matches its ROG siblings and only drops items that physically won’t fit, like multiple PCIe expansion slots and extra SATA ports that most people don’t need. There is still plenty of PCIe 4.0 lanes for next-gen SSDs, plus Intel-powered Gigabit Ethernet and Wi-Fi 6 networking. The board even has room integrated Aura Sync lighting along with a standard RGB strip header and two Gen 2 addressable strip headers.

Since the surface area is at a premium in this form factor, we create more of our own. The dual M.2 slots are mounted to a new ROG SO-DIMM.2 module that plugs into the board, the SupremeFX S1220 audio codec and its associated high-end circuitry sit on their own PCB, and the diagnostic LEDs, reset and CMOS buttons, and BIOS Flashback port relocates to the aptly-named Impact Control Card. You can use FlexKey to retask the reset button to toggle Aura Sync, boot directly into the UEFI, or trigger a safe boot with board defaults.

Motherboard Wars: ASUS, In A Desperate Attempt, Calls Their X570 Boards Better Than MSI and Gigabyte, Posts A Ton of Controversial Slides