Asus showcased a new concept designed motherboard codenamed "Danshui Bay" at its Computex 2011 booth. The beastly motherboard is part of ASUS ROG (Republic of Gamer) Series lineup which are Hardware manufactured for Hardware Enthusiasts. Unlike the EVGA-SR2 which uses dual LGA 1366 sockets, ROG Danshui Bay will include a LGA 2011 and LGA 1366 socket on the same board.

This motherboard would be a great choice for Hardware Enthusiasts who would be waiting for Sandy Bridge-E Processors which would be released in Q4 2011. The board will allow them to use their current LGA-1366 based Gulftown processors consisting of the Intel Core i7 Extreme lineup and when LGA 2011 processors come out, They could pair the new chip with it. It's unclear whether if the board will use separate Northbridge/Southbridge chipsets for both platforms which would be linked together, The Number of PCI-e x16 slots also remain unclear but they would offer full x16 bandwidth.

A total of 22 SATA 6GBps ports are included on the board for connectivity. The LGA 1366 area features 6 DDR3 memory slots supporting Tri-Channel while the LGA 2011 socket has a total of 8 Dimm slots with 4 located on each side of the socket offering for Quad-Channel memory support. ASUS didn't detail much and it also looks like the motherboard is still in development phase, Hopefully more info will be out in the upcoming months. 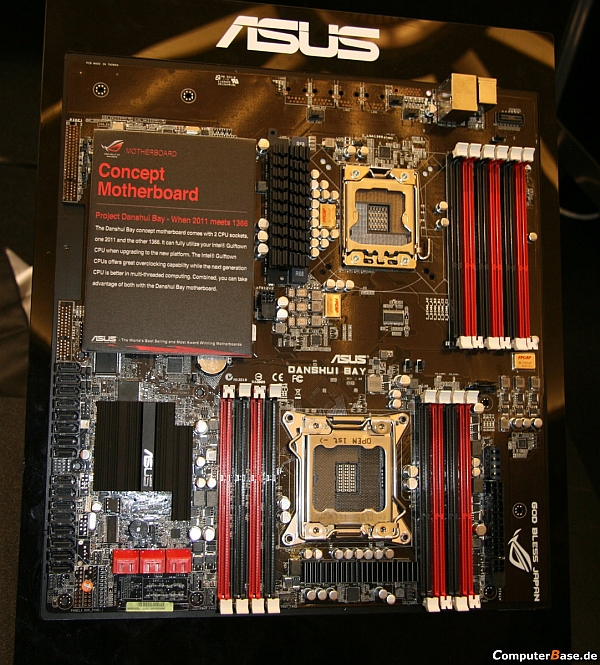