Update: After a commotion that was sparked by Assassin's Creed Unity's 900p resolution and 30fps decision, Ubisoft has issued a statement explaining that Pontbriand's words were taken out of context, and that the development team has not lowered the specifications of any one console in order to achieve parity. The complete statement issued by Ubisoft is shared at the end of this post.

Original Story: The two most important things that every newly released and upcoming video game title should have to enroll among next-gen games are full HD 1080p resolution and frame rate of 60 per second. It is known to all by now that Microsoft’s Xbox One console is slightly behind the demands of major next-gen AAA titles, while Sony’s PlayStation 4 is somewhat more capable of handling the latest video games at large resolution. However, to avoid debates and to keep parity, developers optimize latest video games equally on both consoles, and just as it was speculated, Assassin's Creed Unity has also been optimized to run at a resolution of 900p and 30 frames per second on both PlayStation 4 and Xbox One. 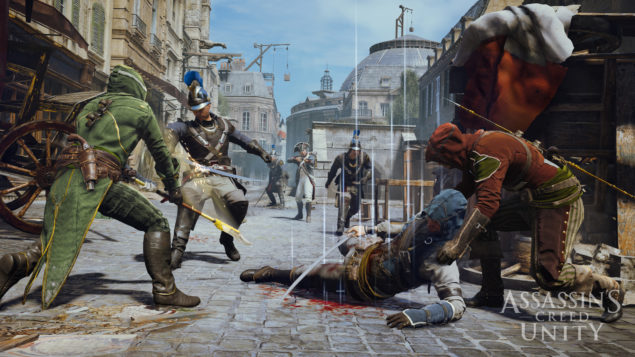 Assassin's Creed Unity is 900p and 30fps on PS4 and Xbox One "to Avoid All the Debates" - Lock in the Graphical Performance is Due to CPUs, Not GPUs

Assassin’s Creed Unity is the latest upcoming game by Ubisoft Montreal that links Ubisoft’s famous open world historical fiction action-adventure stealth video game series exclusively to the latest PlayStation 4 and Xbox One consoles. Set in the magnificent Paris of 1789, the game follows the French Revolution and features the most dense and immersive Assassin’s Creed city ever created. Thanks to the power of the new Anvil engine, the game features “completely rebuilt” stealth, combat and traversal mechanics that offer an overall richer conflict experience, and comes packed with stunning, full-scale open world Paris that is full of venerable wonders. Unfortunately, it looks like all these good things won’t come with full HD 1080p resolution and 60 frames per second.

It seems like Ubisoft wants gamers to enjoy its upcoming next-gen game rather than fight over resolution and frame rate, as it has been confirmed that Assassin’s Creed Unity will run at native 900p resolution and 30 frames per second on both PlayStation 4 and Xbox One consoles. Talking to VideoGamer, senior producer Vincent Pontbriand explained that the reason behind the similar optimizations on both the latest consoles is that the company wanted "to avoid all the debates and stuff." He further explained the technical reasons behind the decision, and said that the thing that prevented the developer from improving Assassin’s Creed Unity's graphical performance is the consoles' CPUs, not the GPUs. He said:

"We decided to lock them at the same specs to avoid all the debates and stuff."

"Technically we're CPU-bound. The GPUs are really powerful, obviously the graphics look pretty good, but it's the CPU [that] has to process the AI, the number of NPCs we have on screen, all these systems running in parallel.”

"We were quickly bottlenecked by that and it was a bit frustrating, because we thought that this was going to be a tenfold improvement over everything AI-wise, and we realised it was going to be pretty hard. It's not the number of polygons that affect the framerate. We could be running at 100fps if it was just graphics, but because of AI, we're still limited to 30 frames per second."

A resolution of 900p doesn’t mean that Assassin's Creed Unity will look like a game for last-gen consoles. Last year, Assassin’s Creed IV: Black Flag was released on the latest consoles with the same resolution and frame rate, but it scored high from graphical point of view. Both PlayStation 4 and Xbox One have the ability to upscale 900p signal to 1080p, leaving very little difference between the native and upscaled resolution. However, to be called as next-gen hardware, the latest consoles should be optimized to handle the requirements of the upcoming major triple A games, or else, this generation of games will likely continue to hung up on figures like 900p and 30fps.

"We understand how Senior Producer Vincent Pontbriand's quotes have been misinterpreted. To set the record straight, we did not lower the specs for Assassin's Creed Unity to account for any one system over the other."

"Assassin's Creed Unity has been engineered from the ground up for next-generation consoles. Over the past 4 years, we have created Assassin's Creed Unity to attain the tremendous level of quality we have now achieved on Xbox One, PlayStation 4 and PC. It's a process of building up toward our goals, not scaling down, and we're proud to say that we have reached those goals on all SKUs.11"

"At no point did we decide to reduce the ambitions of any SKU. All benefited from the full dedication of all of our available optimization resources to help them reach the level of quality we have today with the core Assassin's Creed Unity experience."