With Ubisoft's recent announcement that Assassin's Creed: Rogue will come to PC on March 10th, supporting eye-tracking , Swedish-based Tech company Tobii Tech has announced that it will be the first major game to use their technology. This eye-tracking technology is meant to be used in conjunction with a mouse and keyboard or a controller. 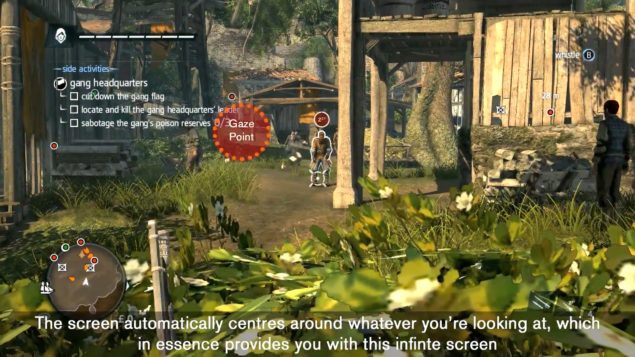 Tobii thinks that eye-tracking is the next step of computer user interfaces.

"No longer will the size of a PC player’s screen restrict how you orient Cormac’s field of view and further explore the environment; the game auto-pans intuitively and in harmony with the player"

With eye-tracking you will be able to gaze at one part of the screen and the game character will actually look in that direction whilst the game camera essentially auto-pans, meaning that if you were to look at the right side of your screen, the camera would start to pan around just as if the game character was looking there.

"Eye tracking is such a natural way to interact with a game and creates tons of potential opportunities for gameplay immersion, We are one of the first to integrate this technology in a video game, and the first to implement eye tracking as a gameplay input in a game of that scale — providing Assassin’s Creed: Rogue gamers with an entirely new, complementary input to the keyboard and mouse. We recognized the power of eye tracking early and were quick to work with Tobii to create a completely new way to experience a game — we are really proud of the result with Assassin’s Creed: Rogue." Corneliu Vasiliu, producer at Ubisoft's Kiev studio.

Tobii-Tech has been working on this technology for a long time, and has managed to make a deal with SteelSeries to release an eye-tracking platform for the PC, the Sentry Eye-Tracker. Assassin's Creed: Rogue will be the first game to take advantage of that platform. The SteelSeries Sentry will ship with a copy of Assassin's Creed: Rogue as a bundle for the first 5.000 units later this year. Tobii has said that they will not get any direct revenue from Ubisoft via this deal, but it will get some indirect business value as the game will hopefully help the eye-tracking gaming technology to take off.

"This is only the beginning of eye-tracking in gaming. It is an important step in Tobii’s long term vision to create a strong ecosystem of games and apps that use eye tracking to create even more immersive experiences" Oscar Werner, president of Tobii Tech (a division of Tobii)

You can currently order the SteelSeries Sentry for 199$, however it does not seem as you will receive Assassin's Creed: Rogue bundled with it at the moment. The eye-tracking technology could be something rather cool and innovative, but it could also be another peripheral that you sadly only use once or twice.