A new report shows that Apple's iPhone models, both new and old, ruled the list of top 10 mobile activations during Christmas 2019 in the United States. The top 9 devices out of 10 included iPhone models ranging from iPhone 6 Plus to iPhone 11. Samsung was a distant number 2 in this list, and did not even have a device in the top 10.

Flurry Analytics, a popular mobile analytics company, shared a report on their website regarding December analytics for mobile device activations. iPhone 11 come out on top, while the rest of the top 9 spots were taken by other Apple smartphones like iPhone XR and older models. Number ten spot was captured by Xiaomi Mi 4 LTE, the only Android smartphone in the top 10. Samsung was not in the top 10 at all, with Galaxy A10e, a budget smartphone, appearing at number 11 on the list.

Flurry Analytics highlighted this in their report:

Inspecting the chart, we notice a few key trends. First, Apple is earning between 39% - 47% of new device activations across December, and their share climbs as the month progresses. This averages out to 43% for the month, which holds Apple around the market share rate we calculated just before the holiday season. Meanwhile Samsung earned between 24% - 28% across December, delivering a total December share of 26.5%. This is lower than the approximately 30% U.S. market share we calculated for Samsung ahead of the holidays.

Another interesting bit of data in the report is the presence of older iPhone models in the top 10 list. Devices like iPhone XR, iPhone 7 and iPhone 8 are over a year old, with iPhone 6 Plus almost 5 years old, yet they all appear in the top 10 list. They are beating out not only some newer iPhone models, but every other Android smartphone. Strangely, iPhone 6s and iPhone 6s Plus were nowhere to be found in this list, despite being newer than iPhone 7 Plus. 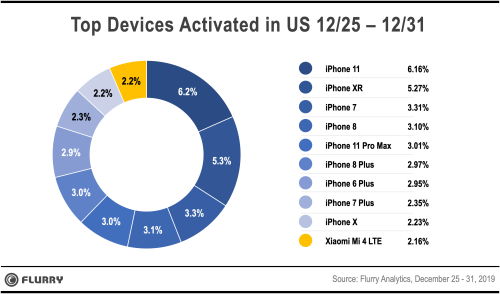 iPhone XR is still leading the activation charts, thanks to its stellar feature set and a low starting price of $599. iPhone 11's popularity can also be attributed to the same reasons as it is technically a successor to iPhone XR in Apple's smartphone line-up.

Apple seems to have found the right price point for its entry-level iPhone model, as evident from iPhone 11's success. However, the company could do better by lowering the prices for its Pro-level iPhones, which would put them within the reach of more consumers.