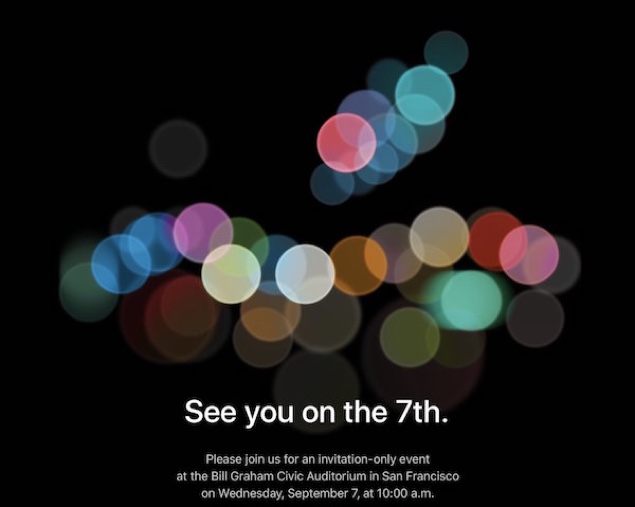 Apple has sent out press invites for its September 7th iPhone 7 and iPhone 7 Plus announcement event.

Apple has started to send out invitations to the press asking them to join the company on the 7th of September for a media event. The event will be held in the Bill Graham Civic Auditorium in San Francisco, and things will kick off at 10am that day. This is the same venue where Apple announces most of its new products.

It's absolutely no surprise what the highlight announcement of this event be - the iPhone 7 and iPhone 7 Plus. But apart from that, the company is expected to announce an updated lineup of Apple Watch devices as well. And given that the MacBook Pro hasn't seen a proper refresh in a few years, it's highly likely the Cupertino giant will utilize the same stage to unveil its upcoming MacBook Pro lineup as well.

Coming back to the iPhone 7 and iPhone 7 Plus, it seems confirmed at this point in time that the larger of the two devices will feature a dual camera lens system. And given how Apple has plastered in 'bokeh' at the event invite itself, it's likely the dual camera lens system will be used to adjust focus after taking the shot itself. But of course, Apple tends to go out of line and do things its own way, so it remains to be seen what else the Cupertino company will throw into the mix.

Regarding the Apple Watch 2, reports suggest that the new wearable will focus a lot on having more sensors onboard as well as GPS connectivity without relying on the iPhone. Apart from that, whispers in the air suggest the original Apple Watch will see a minor spec bump as well, and the company will sell it alongside the new wearable.

Just like every year, we will be covering the September 7th event from start to finish. Of course, there is a chance Apple will throw in a handful of surprises to gain some public interest. But it remains to be seen what surprises they might be. Maybe a tri-band AirPort Extreme? Maybe not, but still.

Mark your calendars for the 7th of September, everyone. It's going to be a lengthy day in terms of reading and new stuff coming out of the Cupertino gates.

Are you feeling excited already?