Apple's launch of a smaller iPad Pro last month came as a surprise for quite a bit of quarters, even though the device had been in the rumor mill for quite a while. Looks like a 12.9 inch slate did just prove to be quite a bit to handle for several users, forcing the company to launch a similar device in 'its most popular' screen size bracket. But if you think that the 9.7 inch iPad Pro is simply a smaller version of last year's tablet, you're in for quite a surprise.

It comes with several tweaks and changes under the hood and today, we've managed to get our hands on a detailed display analysis. As you read on below, you'll see that not only do we get a vastly overhauled display, but more importantly, perhaps there's something which can be learned about what to expect on the iPhone 7 as well. Companies after all often test new features first before large scale launches, and the iPad does come with some very important upgrades. What are these? Head over below to find out more. 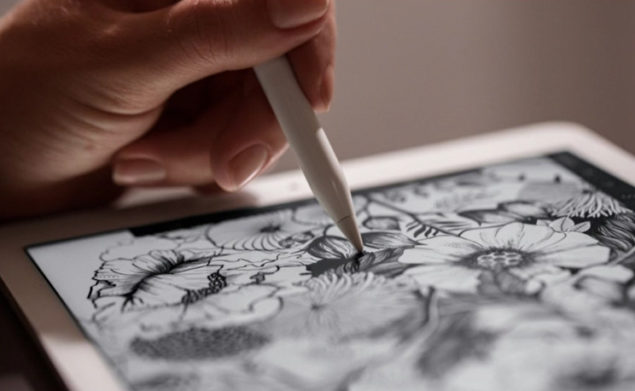 Apple's 9.7 Inch iPad Pro Performs Well In Display Tests; Potential Hints On What To Expect From The iPhone 7?

When it comes to the display of any gadget or device out there, several factors come together in play in order to create a perfect viewing experience. Just like with camera resolution where aperture width, pixel recognition and other factors combine for good photographic capabilities, for displays, we've got factors which range from manufacturing materials used to the angles at which content is displayed at.

To that end, folks over at DisplayMate have carried out one of their famous display analysis for the 9.7 inch iPad Pro, which tells us all that we need to know about its display. Screen resolution for the smaller tablet stands at 2048 x 1536, which lends it a similar pixel density of 264 ppi as the iPad Air 2 and the 12.9 inch iPad Pro. Apple's kept this number constant ever since the iPad Mini lineup, and as you read below, you'll find out that the company's heading in some different directions this time.

The latest iPad comes with an all new color gamut, which adds a lot of detail and content support for the iPad. A color gamut is all the range of colors that a screen can display, and with the 9.7 inch iPad Pro, you'll be getting a combination of both the standard displays on most handhelds available out there and the display quality expected from larger screens, including 4K TVs.

It comes with a standard, smaller sRGB / Rec.709 Gamut and a wider DCI-P3 Gamut, which adds a lot of detail and color support to the device's screen. Comparison of the two can be seen in the first image above, with the DCI managing to capture a higher spectrum of colors as should be expected. Another thing that's impressive from Apple's 2016 tablet is the accuracy of both the gamuts, a point that we'll explore further below. For now, the second image above shows the reference colors for both the sRG / Rec. 709 and the DCI-P3, so take a good look at it.

The use of two separate color gamuts on the iPad means that each tablet has to be carefully calibrated from the factory on, with the manufacturer having to concern it self with two new display phosphers. In addition, the display has to also switch between both the gamuts effectively, to adjust for different content types. This, when combined with the overall coherence of the screen in capturing colors, makes for a vastly improved display.

The DCI-P3 gets an accuracy rating of 102% and the Rec.709 gets a rating of 103%, showing that Apple's heading in the right direction over here. The accuracy of both of them can be seen in the image below which separate each of the 41 individual colors available for the screen and compare how well Apple's latest offering delivers on each of them. Talking numbers, the iPad comes with a color accuracy of 1.3 JNCD sRGB gamut and 1.4 for the DCI-P3, making it very accurate in terms of color reproduced. Ratings above 1 for the JNCD mean that reproduction differences are visible on the screen, and looks like Apple's got some work to do in the DCI-P3 department here.

Moving towards display brightness, reflectance and contrast ratios for the tablet, we see that the iPad leads on several fronts. At the time of its launch, Apple was sure to mention the low reflectance of the screen, an aspect that's very critical to any display out there. Screen reflectance is linked directly to the Contrast Ratio on a screen, with the latter showing the ratio of the brightest to the darkest color on display.

The iPad Pro reflects only 1.7% of the surrounding Ambient Light, which sits almost right at the bottom of the industry. Taking a look at how well the content is displayed on the screen with the reflection, the iPad Pro comes with Contrast Rating for High Ambient Light score of 301, which should result in smooth viewing experiences in a lot of settings. However, Apple should now start working on its 12.9 inch slate, as similar features on a larger screen should display their effectiveness in a much more visible manner.

One feature where it lacks however is the Contrast Ratio. As noted above, the Contrast Ratio of any screen increases as you decrease overall reflectance, and with the iPad, its on par with the much older iPad Air 2 and lower than the 12 inch iPad Pro launched last year. The difference isn't that significant to cause any alarms however, and we see the device take its lead back in nearly every other metric; as you can see in the corresponding data tablets in the images above.

When viewing the display under incandescent light, the iPad's Color Temperature of White Point decreases to 5,000K from 6,945K, which is very important when viewing content under artificial light. The definition of white changes as you change the source of light of an image, given that it's a result of two separate values. Any White Point rating for a source of light is a result of the hue and colorfulness of a white object under said light; taken as a white paper in this scenario.

At this point, it would be relevant to remember that the iPad Pro comes with two color gamuts, or more importantly the DCI-P3. When compared to the standard rec. 709 gamut, it uses specifically tuned phosphors for both Green and Red light, which result in more balanced and reduced Blue Light emanating from the screen. This should in turn result in more rested eyes while viewing the screen, and should also be kept in mind for the iPhone 7; Apple could launch the device with the DCI-P3 on board, resulting in similar effects. Foxconn and SHARP's partnership would undoubtedly help Cupertino quite a bit here, so we're keeping our ears perked for any new information. 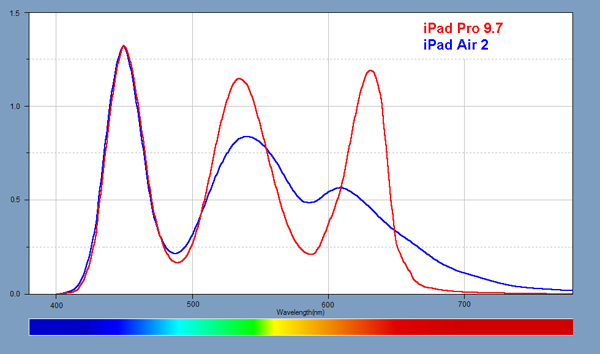 Having taken a look at the 9.7 inch iPad Pro's display specifications in detail, Apple does seem to have put a significant amount of effort in redesigning the iPad Pro lineup. This differentiation between the 12 and the 9.7 inch devices is visible not only at the display, but at the performance and other fronts as well. With the smaller tablet targeting a more broad range of customers, this focus on multimedia was expected, and should also point us in the right direction for the iPhone 7. It wouldn't be a surprise to see the DCI-P3 make it on board the device, which when coupled with improved white balance adjustments, could result in a vastly upgraded display as well.

Overall, the smaller iPad Pro sees a much improved display, especially when compared with the iPad Air 2. While the latter might sound outdated right now, given the rate at which things move forward in the tech world, it goes to show that things have once again advanced forward at a nice rate; especially in categories such as display as opposed to the regular hardware and performance upgrades.