News of Apple shifting its Mac lineup to ARM processors started to appear in 2017, and to give weight to those countless rumors and reports, the Cupertino tech company has recruited a veteran of the ARM CPU design space. The reason for this hire is quite obvious for some, as it will allow Apple to reduce its dependency on Intel as it prepares to launch its first Mac machines running the A-series silicon based on the ARM architecture.

According to Mike Flippo’s LinkedIn profile (spotted by AppleInsider), he’s currently employed at Apple but before that, he was with ARM since 2009. His notable accomplishments with the British chip design firm includes development of silicon in the consumer, automobile, and server CPU categories. Thanks to this convincing résumé, we can see why Apple would be keen on adding him to its pool of talented individuals.

Previous reports have stated that Apple will enable the switch to ARM chips on Mac machines from 2020, with Intel losing 8 percent of its share price when the news broke back in 2018. However, the transition isn’t going to be sudden but it will still be noteworthy. There has been speculation on why Apple would want to slowly distance itself from Intel.

One reason could be that during 2016, Intel had not prepared a sufficient batch of Kaby Lake processors for Apple’s 2016 MacBook Pro lineup, forcing the company to stick to Skylake processors while the competition raged on with the latest and greatest silicon from Intel. This kind of tardiness and lack of punctuality might have deeply grieved Apple. However, a more important reason could be that the iPhone maker has made considerable strides with its own A12X Bionic chip tailored for the 2018 iPad Pro series. 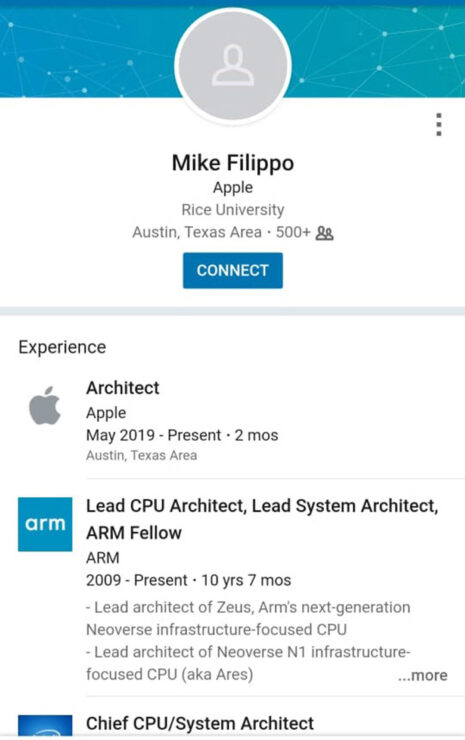 In several benchmarks, the iPad Pro is shown to be as fast as a 15-inch MacBook Pro armed with Intel’s hexa-core processor and 16GB RAM. With the kind of performance reaching an impressive stature, Apple may have already cemented its position of churning out chips that are as capable as Intel’s high-end offerings for notebooks, leaving the California-based behemoth to tailor an A-series chip specifically designed for a Mac.

Such machines are expected to deliver similar performance while giving tremendous benefits in battery life while maintaining top-notch security. It should be noted in 2018, Bloomberg reported that Intel generates approximately 5 percent of its annual revenue from processor sales to Apple, but there’s no mention of this year’s figure. Regardless, losing a lucrative client such as Apple will deal a considerable blow to the processor maker’s armor, but it should take several years before Apple is convinced that it no longer needs Intel.

Also, during that time gap, there’s no telling what Intel might release that could convince Apple to maintain its partnership with the company. 2020 is certainly a year to be excited for if you’re a Mac enthusiast, and we suggest that you continue following us for the latest updates on Apple’s plans for the future.