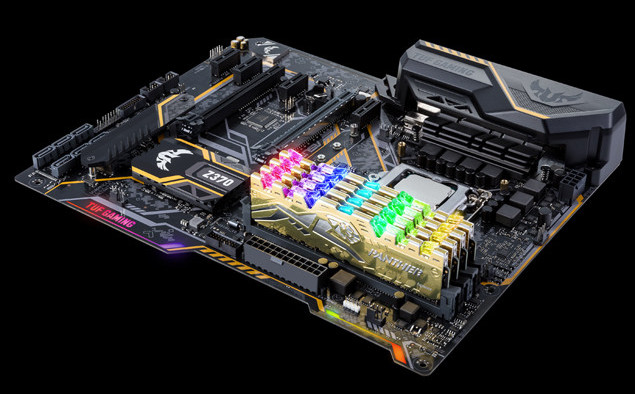 Apacer is one of the lesser recognized names in memory but has put out solid DDR4 kits recently. Apacer is now like many others showing off their colorful side with their Panther Rage RGB DDR4 memory kits. The older models featured a single LED light and have changed the heatspreader to a gaudy gold.

Apacer says that by implementing the newly developed hardware architecture to enhance the RGB controller, PANTHER RAGE DDR4 RGB has improved the performance by 200%. (Though it isn't clear what that means) It also seamlessly integrates with the latest ASUS Aura Sync software which is popular among gamers and allows users to select various patterns based on their preference. On top of that, it is compatible with the latest platforms by Intel and AMD.

Panther Rage DDR4 RGB's angular asymmetrical design and golden-mirrored material refract a riot of colors. The use of highly transparent materials makes Panther's prism-like teeth more vivid. The competition looks downright dull in comparison. By integrating with Aura Sync, it gives users complete control of the light show. It has multiple patterns to add in the future and allows the synchronization of different devices. Users can effortlessly customize patterns to reflect their personalities. In addition, Apacer has teamed up with ASUS TUF Gaming to design a new edition which integrates Apacer's PANTHER with the solid, durable and camouflaged force from TUF gaming. It shows the determination to thrive on every battlefield.

PANTHER RAGE DDR4 RGB is capable of high clock rate and low latency, offering options in 2400/2666/2800/3000/3200MHz. Users can overclock on Intel XMP 2.0 without manual adjustments on BIOS parameters. Available in 8GB, and 16GB, this memory module can be combined up to a total of 128GB memory on Intel motherboards to achieve mind-blowing performance.

To ensure superior stability, Apacer has also deployed professional technologies for industrial DRAM, including a highly efficient heat spreader and quality IC. It can operate effectively at low voltage and reduce the need for heat release. With incredible potential for overclocking, heat spread, stability, and excellent value, PANTHER RAGE DDR4 RGB is ready to blow away its rivals and become the leading light in DRAM.

Apacer has not given a date or pricing for the Panther Rage.