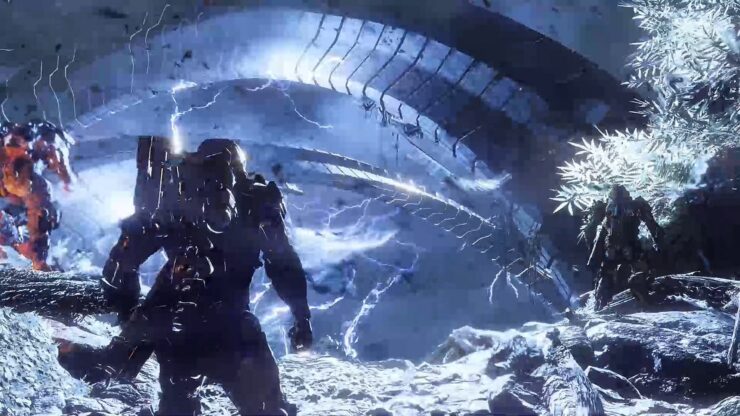 With Anthem now close to its debut on the market, BioWare has finally pulled the curtain on some of the game's endgame activities. Nathan experienced a Legendary Contract in his hands-on preview, but there's something else that the developers had teased at the end of the game's E3 2017 debut trailer: the Shaper Storms.

These occur in the world when the energy of the Anthem of Creation activates Shaper instruments, those that were used to create the world and left behind by the Shapers themselves. Now they've been renamed Cataclysms and in a couple interviews, Executive Producer Mark Darrah provided an overview while confirming their seasonal nature.

Variety: We unlock one stronghold during the main story. The other strongholds don’t unlock until you get to the endgame and finish the main story. There is power gating in a way, in that you have to have unlocked it in order to play it. We’re not going to force you to be at a certain suit level, at least not yet. The Cataclysms will be more like that. Anyone can go into them, but your degree of success will be more driven by your strategy and gear. It’s a soft gate. You can experience the content. We don’t want to have content that people feel like they can’t see because they aren’t good enough.

Gamesradar: What we want to try to move towards with our post-launch content in general is something a bit more conversational than what we've had in the past. I mean, the goal would be new content every day, of some form. I don't think we're going to get that, but it'd be nice to have some sort of touchpoint every single day. Cataclysms will obviously not be every day; they're designed to be content that you engage with for weeks, and they would come out less frequently. They're more meta-changing; they're designed to be more seasonal.

The goal of something like a Cataclysm is that it should be impossible for you to fully explore in that first week. You will need to do the Cataclysm to get the gear to do the Cataclysm better, so it will be somewhat self-gating. But never underestimate how quickly people can churn through your content. The ideal is that it should always feel like something new has come, or is coming, or just came. It should always feel like something's about to happen.

On a separate note, Lead Producer Ben Irving took to Reddit to reveal a bunch of Quality of Life (QoL) improvements coming to the PC version of Anthem when it comes to controls and UI (User Interface).