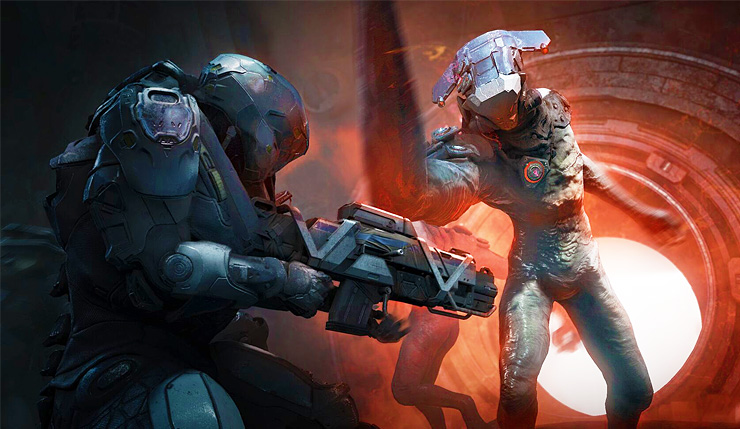 Last week I got the chance to play several hours of BioWare's Anthem at a preview event at EA headquarters – I’ve already shared my thoughts on the game’s early-to-midgame content, but I also got the opportunity to give some endgame content a spin. Specifically, I tackled a couple Strongholds and a Legendary Contract.

For those who haven’t kept abreast of all things Anthem, Strongholds are essentially BioWare’s take on Raids – high-level dungeon hacks that you should probably have four players for (team size is more flexible most of the time). Legendary Contracts, on the other hand, feature a degree of randomness and are designed to be tackled multiple times. Given the fact that BioWare clearly wants Anthem to be a 100-hour-plus long-tail experience in the Destiny mold, players are going to be spending a lot of time with this endgame content, so is it any good? Or is it just the table scraps left at the end of the meal? 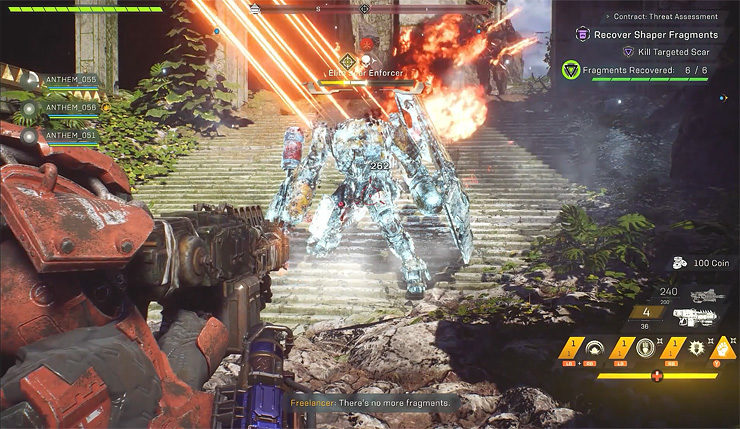 Based on my limited hands-on time, it seems like Legendary Contracts mostly take place out in the open world rather than more enclosed locales. The contract I tackled, entitled Threat Assessment, required my squad to fly around an area dotted by crumbling ruins while completing a sequence of three objectives – rescue some fellow Sentinels, collect a few Macguffins, then track down a heavily-guarded spy. I didn’t have the time to replay the contract, so I’m not sure how much they change when you revisit them, but (I’m guessing) the game does some mixing and matching with your objectives. If that’s the case, the game does a fairly good job of tying the three stages together in a way that doesn’t feel too random.

Overall, Legendary Contracts definitely felt a bit looser than Strongholds, with the focus mainly on battling unruly mobs of high-level enemies. That isn’t necessarily a bad thing, as Anthem is best when it’s at its most chaotic. Threat Assessment culminated in a fun throwdown with a Fury, a freaky-looking customer who can warp around the battlefield at will and erect self-healing barriers. Taking out the Fury and his heavy-duty backup was one of the most challenging, and entertaining, things I got to do during my time with Anthem. 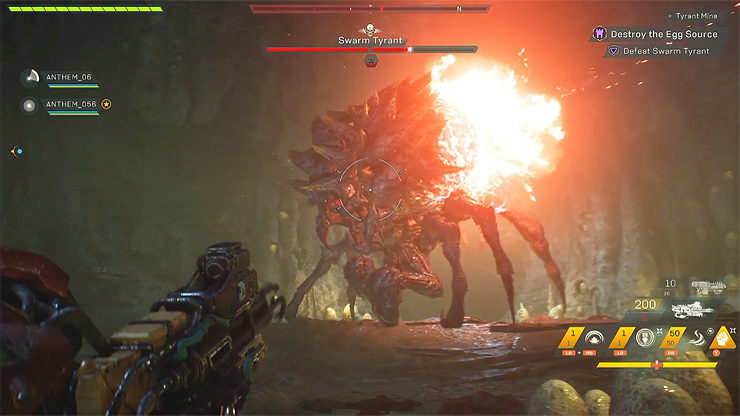 As mentioned, Strongholds have a more structured feel, telling simple self-contained stories of sorts. I tackled two Strongholds (there are only three in total) – Tyrant Mine is a deep dive into a giant arachnid nest, while Temple of the Scar tasks the player with infiltrating a heavily-fortified alien base. Strongholds are unquestionably the most complex, fleshed out missions in the game, featuring some fun bits of exploration and big bodacious bosses. I’m tempted to say the latter are the highlight of the game – blasting the guts out of a 50-foot-tall spider tends to stick with you, y’know?

As you may have gathered by now, I had a good amount of fun with Anthem’s endgame content. Strongholds are the most polished, ambitious content in the game, and Legendary Contracts seem like good, mindless fun. But will the endgame stuff hold up long term? I return to criticism from my initial Anthem impressions – all the missions in Anthem feel rather similar. The endgame ratchets up the intensity and spectacle, but the structure of Anthem’s first missions and final Strongholds is basically the same. Fly around the open world following markers and fighting mobs for a few minutes, then delve into a dungeon-like area where you fight more enemies and, eventually, a boss. It is what it is. 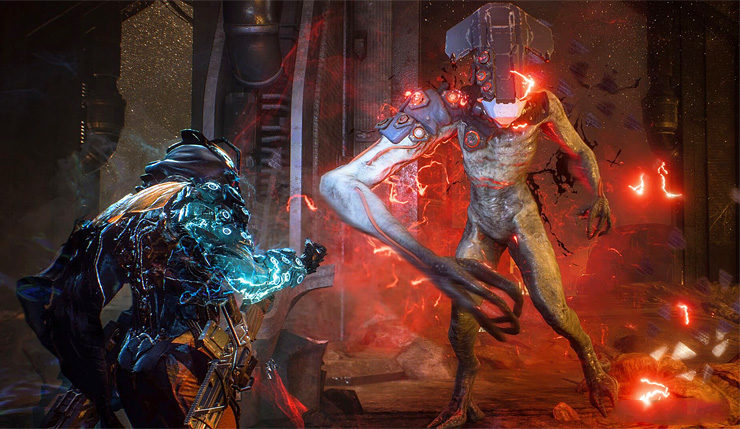 Also, I’m not sure Strongholds and Legendary Contracts were as challenging as BioWare has promised they’ll be. Granted, we were given souped-up level 30 characters and weren’t playing on one of the higher difficulty settings, but the impression I’ve got from BioWare’s comments is that endgame content should be tough even on Normal. It wasn’t particularly. Will players be interested in replaying on a higher difficulty to give themselves a real challenge, or will they just finish a Stronghold and move on with their lives? Anthem’s endgame content is the best part of BioWare’s adventure, but I’m not entirely convinced it’s quite engaging, or plentiful, enough to keep players around for extra encores.

Anthem boosts onto PC, Xbox One, and PS4 on February 22, with Origin and EA Access subscribers being able to get a head start on the game on February 15. The second leg of the Anthem demo kicks off today (February 1) at 9am PT.