Android P Notifications Might Be Getting New Features, Including Remind, Send, and Snooze Actions

Notifications can often get annoying after you're the type to install every app that comes your way. Yes, there is the option to disable individual apps from sending notifications, but it's hidden deep within the settings and is a bit hard to find. Mass dismissal of notifications is often risky, as there might be something important between the metric ton of spam. Thankfully, as of last year, Android Oreo added the ability to snooze them, which allowed you to set them to reappear after a set time. To ensure that they don't miss an important email from their boss, people leave notifications lying around in the tray for hours so that they could sift through them later. Will Android P finally fix out notification woes? It just might

9to5Google stumbled upon a new screenshot added to the Play Store listing for Google's smart response app Reply. The screenshot indicated that notifications in Android P are going to have even more control options accessible via a new toolbar below the notification and quick reply field. The toolbar has the following buttons Remind me at work, Remind me at home, Add reminder, Send to, and Snooze 1 hour, each with the accompanying icons. Here's how they look like: 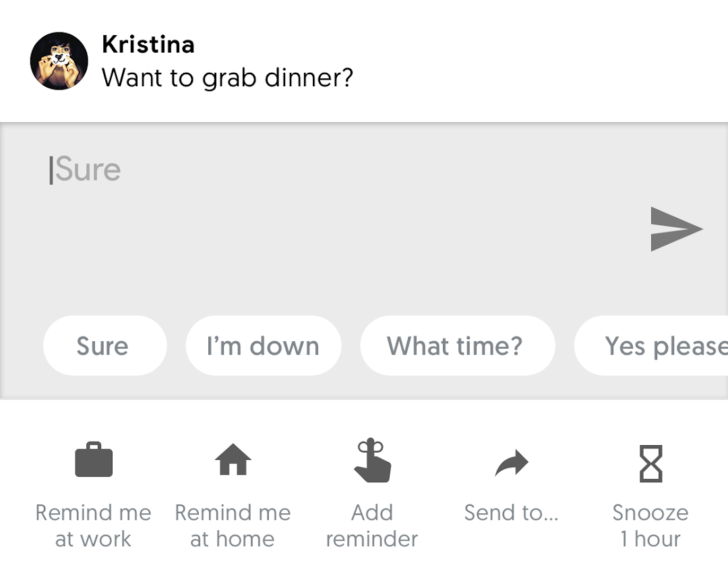 Considering that the screenshot was spotted in Google's Smart Reply app, there is a likelihood of the options being limited just to Reply. However, the Google Assistant already has location-based reminders, so it would make more sense to give location-based notification reminders, rather than smart replies.

There is no official word from Google about it yet, but its fair to assume that Android P is likely to get the above options. Currently, one has to rely on third-party apps for similar functionalities, some of which offer a lot more features, but it's always nice to have them natively supported. We'll have to wait for the new Android P Developer preview to show up before we can speculate further, or we could get answers at Google I/O, which kicks off on May 8th.