Last month, Samsung launched the Android Oreo beta program for its flagships Galaxy S8 and the Galaxy S8+. Since the release of the program, users of these two premium devices, who are enrolled in the program, have received up to four beta updates. However, until now, the program was limited to just the US and UK markets.

Expanding the reach of the program, Samsung has released Android 8.0 Oreo beta program for more countries. The new regions to get entry to the program are India, Germany, France, and Poland. Samsung did not make any official announcement regarding this expansion yet, but the S8 and S8+ users in these regions have begun receiving the update over the prior weekend.

Enrol your Galaxy S8/S8+ in the beta program

So, if you own a Galaxy S8 or S8+ and reside in any of the countries mentioned above, then you must enrol your device in the Oreo beta program. To register for the beta program, you need to head to the Samsung Members app and tap on "Register for Galaxy Beta Program" option placed under the Notices section of the Home tab. After that, you got to tap on the banner image for the beta program. Now, agree to the terms and conditions of the program after which you will get the "enrol" option. 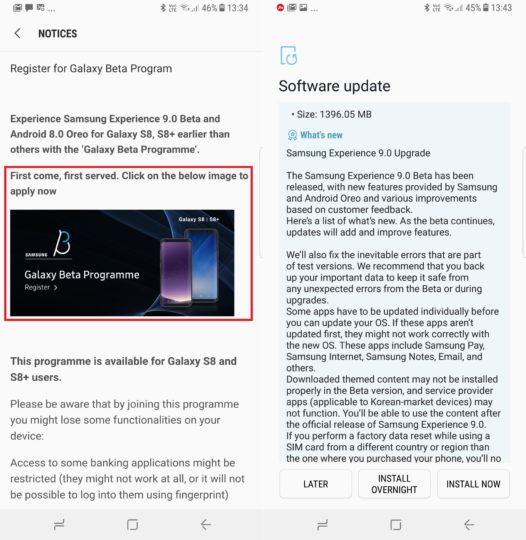 After successfully registering for the program, you can download the beta by opening the Settings app on your phone and then selecting the Software update > Download updates manually. The update is 1.4GB in size, which means that your device better be connected to a stable WiFi connection for smooth download and installation of the update. We would like to mention that some users may not be able to see the update right away but it will eventually be made available to them.

No timeline for the final stable update yet

For now, Samsung has not revealed a timeline for releasing the stable Oreo update for the S8 and S8+. But, as it inches closer to more beta updates we can expect the final update to debut by next month.