By Hassan Mujtaba
Jan 20, 2016 04:06 EST
Share Tweet Submit
This is not investment advice. The author has no position in any of the stocks mentioned. WCCF TECH INC has a disclosure and ethics policy.

AMD has officially posted their financials for Q4 2015 and the full year results for 2015. In 2015, AMD has faced a difficult time financially due to the shrinking PC market which resulted in a 10% decline in quarterly revenue and an overall 28% decline in full year revenue for 2015. The Sunnyvale, California based company reported a revenue of $3.99 Billion in 2015, down from $5.50 Billion in 2014. 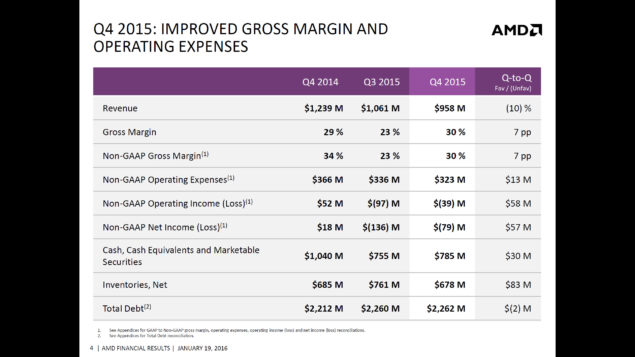 Since it is end of the year, AMD is posting both their quarterly and full year financial reports, talking the overall performance of the company in 2015. In Q4 2015 specifically, AMD's revenue decline 10% compared to the last quarter and now stands at $958 million compared to $1.06 billion in the last quarter. Talking on performance of their businesses, AMD's computing and graphics segment saw an 11% increase in Q4 with a reported revenue of $470 million as AMD shipped more high-end notebook processors, most notably their Carrizo based APUs and FX processors. On the other hand, the Enterprise, Embedded and Semi-Custom side of business didn't do as well as the graphics business and posted a revenue of $488 million which is a 23% decline over the last quarter. 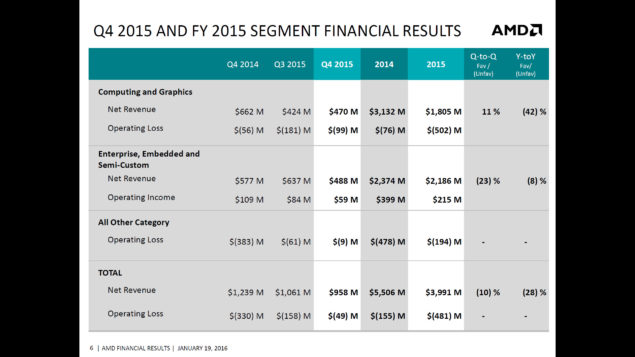 During the quarter, AMD made some pretty interesting announcements, particularly, the most interesting was their Polaris GPU announcements which were previewed just recently and further demoed at CES '16. Based on the 14nm architecture, the Polaris GPUs will leverage AMD's performance in both consumer and enterprise markets with new Radeon and FirePro solutions. The Polaris GPUs are based on the 14nm FinFET process from GlobalFoundries and feature up to 2x performance per watt compared to previous generation GCN cores. 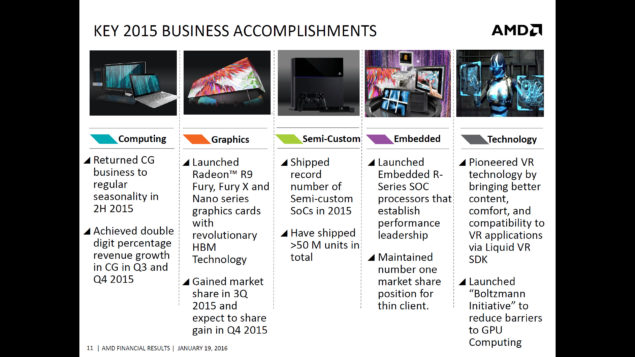 Further announcements include the Radeon R9 380X graphics card which was the first, fully enabled Tonga based graphics card for the consumer market. AMD also released a totally revised version of their Crimson driver under the Radeon Software brand which is being handled by the Radeon Technologies Group led by Raja Koduri. The group also announced the Boltzmann Initiative and GPUOpen platform for enterprise users and developers. The ARM based Opteron A1100 "Seattle" SOCs and AMD R-Series embedded solutions are also part of the products launched by AMD in Q4 2015. 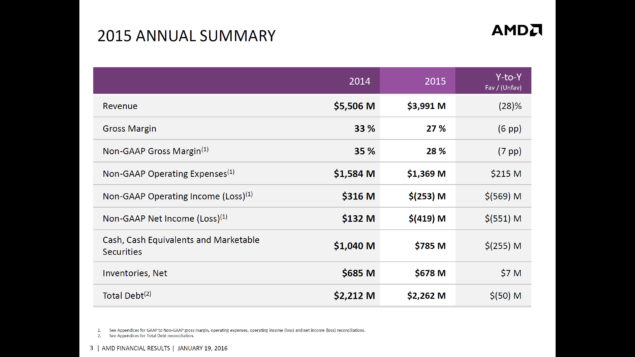 Talking about the entire year, AMD posted a revenue of $3.99 Billion which is a 28% decline over $.5.51 that was posted in 2014. AMD posted a $481 million operating loss in 2015 compared to $155 million in 2014. If we look at the yearly performance of AMD's buisness segments, their computing and graphics segment was down 42% from 2014 due to lower client processors sales and the Enterprise, Embedded and Semi-Custom segment was down 8% from where it stood in 2014.

“AMD closed 2015 with solid execution fueled by the second straight quarter of double-digit percentage revenue growth in our Computing and Graphics segment and record annual semicustom unit shipments,” said Dr. Lisa Su, AMD president and CEO. “While 2015 was challenging from a financial perspective, key R&D investments and a sharpened focus on innovation position us well to deliver great products, improved financial results and share gains in 2016.” via AMD 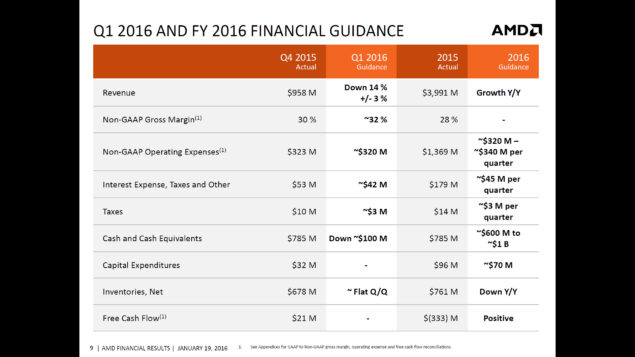 Moving forward, AMD expects to see a decline of 14% in Q1 2016 compared to Q4 2015 based on their 13 week quarter analysis. AMD states that this decline will be mainly due to game console seasonality and an cautious macro environment in China. However, for the entire year of 2016, AMD expects to see a revenue growth (year-over-year) which will be led by Polaris graphics and Zen CPU architectures driving next gen of FirePro GPUs and Opteron CPUs. AMD will be shipping Zen first in high-performance desktop PCs and is on its way to sample in 2016 as scheduled in the form of the Summit Ridge family that will be fully supported on the latest AM4 platform later this year. 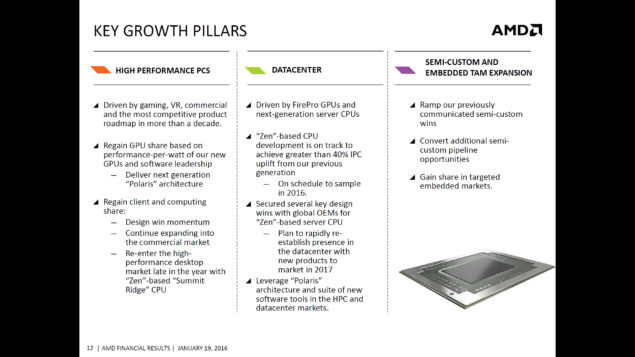 The Zen based server CPUs will re-establish AMD's presence in the datacenter market which has remained dominant by Intel for several years now. AMD plans to hit them back on all fronts with Zen based products in 2017 while Polaris will not just be a consumer-side graphics chip but also aim the HPC and datacenter markets moving forward. 2016 will mark as an important year for AMD as they have several new chips planned for the market that will deliver much better performance increases compared to their previous generation offerings with further focus on efficiency.