The very first gaming performance face-off between the AMD Ryzen 7 1800X and the Intel Core i7 6900K is here. Both processors were put in a head-to-head comparison running the same game, the same in-game scenery and at the same time. This side by side comparison is courtesy of PCWorld and it gives us a taste of what to expect from the Ryzen 7 1800X in games.

It also happens to be the fastest 8-core desktop CPU on the market. That is until the Ryzen 7 1800X comes out on March 2nd to contest it for that spot. AMD has already claimed the fastest 8-core crown for its 1800X after demonstrating a 9% performance lead in Cinebench R15 at its Ryzen press event. Do we have a new 8-core king on our hands? We'll only find out definitively on March 2nd. However, today we get one step closer to answering that question with this gaming test. 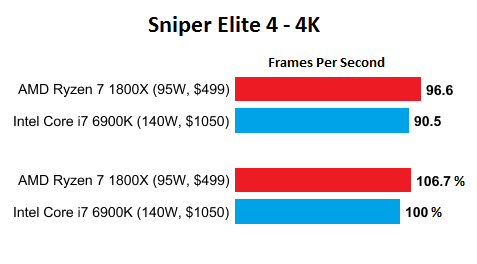 The value proposition that Ryzen represents is very significant for gamers. Because each dollar you save on your CPU purchase you can put towards a higher-end GPU or an additional GPU. Which would have a much more considerable impact on gaming performance and the overall gaming experience.