AMD's next generation x86 and ARM high performance cores code named "Zen" and "K12" have reportedly taped out according to the linkedin profile of an AMD design engineer. Coincidentally AMD's President and CEO Lisa Su had also announced at the company's Q3 earnings call that the company's design teams have successfully taped out several FinFET designs at multiple foundries in Q3 2015. 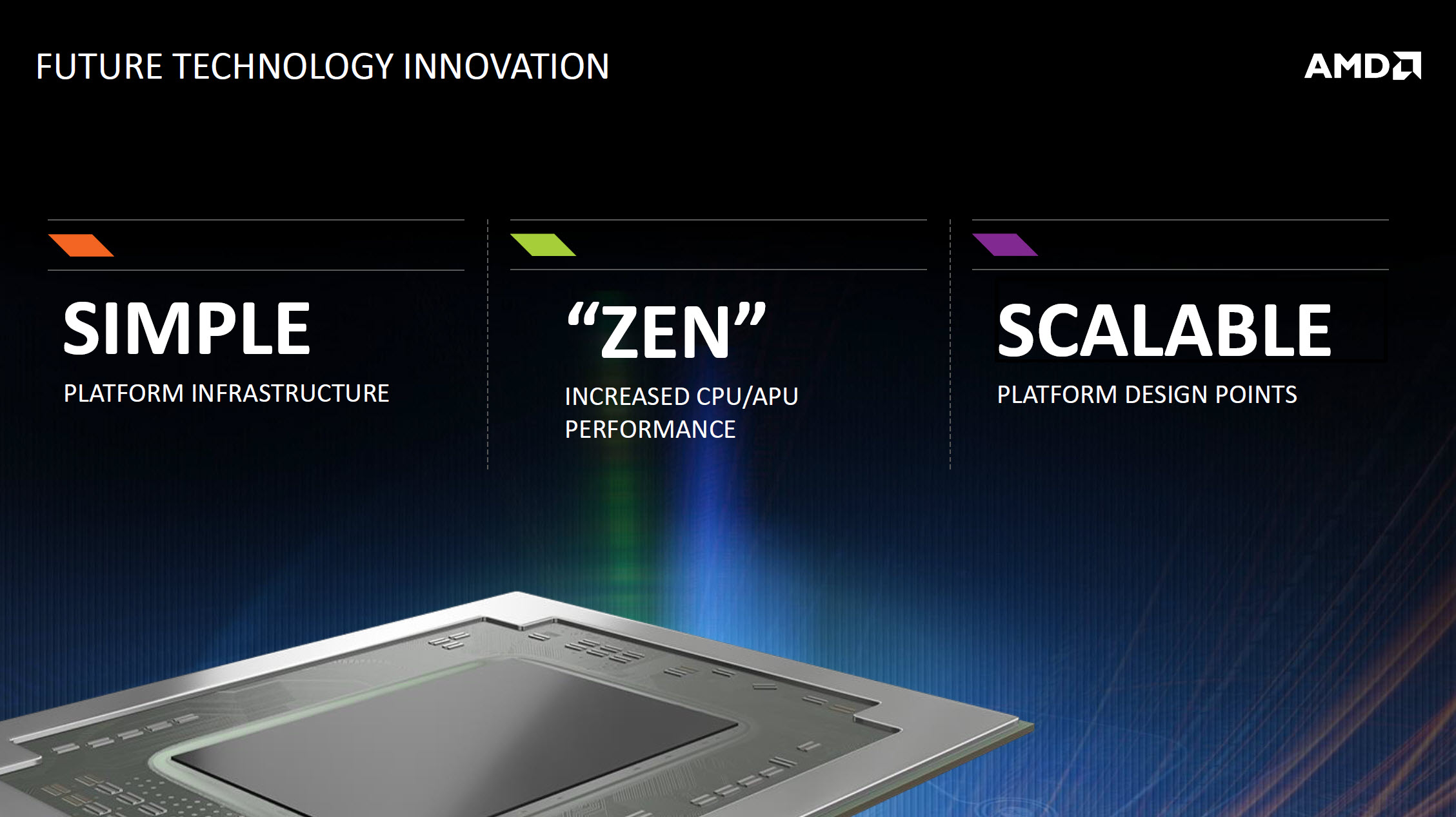 We reported in July that AMD had taped out two FinFET designs in Q2 2015. AMD then followed up in Q3 by taping out several other FinFET products at more than one foundry. AMD's CEO did not go into detail with regards to which designs taped out on which specific process node or at which foundry. However AMD's established foundry partners for FinFET products include TSMC with its 16FF+ process and Globalfoundries with its 14LPP process. So it's a safe bet that these are the foundries Su was referring to, with Samsung standing in as a potential third player and a second source to Globalfoundries. Since Samsung and Globalfoundries have partnered on 14nm FinFET LPE and LPP, AMD could chose to go with either one.

AMD Q3 2015 Earnings Teleconference
Harlan Sur - JPMorgan - Analyst
Great, thanks for taking my question. So, Lisa, you gave us a relatively brief update on Zen. If you could just give us an update on Zen from a (technical difficulty) perspective? It's a new core architecture, a new process technology. I think you taped out a couple of chips last quarter.
Any feedback on the performance or the yield metrics that gives the team confidence on the broad rollout of the different product families starting next year?

Lisa Su - Advanced Micro Devices, Inc. - President, CEO
Yes, so, Harlan, let me couch it this way. So as we stated in the financial analyst day, we had a target of 40% IPC performance of Zen over our previous generation. We believe we are on track for that.
Relative to process technology, we have taped out multiple products to multiple fabs in FinFET and we believe that they're also on track in terms of overall ramp. So we continue to focus on both of those aspects, both the architecture and the process technology, but so far, so good.

According to the profile of an AMD design engineer spotted by Matthias Waldhauer AKA Dresdenboy on Linkedin, both Zen and K12 have already taped out. You'll find a screengrab of the relative information below.

What We Know So Far About AMD's Zen Microarchitecture

We first broke the news about AMD's next generation high performance core back in September of last year. At which point AMD's then CEO Rory Read revealed the code name for the company's upcoming high performance x86 CPU microarchitecture. Prior to that revelation we only had knowledge of Zen's sister ARMv8 core code named K12.

As of late AMD has been slightly more generous in providing detail about its brand new inception. Back in May AMD announced that it was preparing an entirely new line-up of FX CPUs and a brand new platform 'AM4". We learned that the new family of FX processors code named "Summit Ridge" would feature an entirely new socket and an updated feature set including DDR4 memory support. And more importantly we learned that the new platform would feature mainstream CPUs with "high core counts" - rumored to be up to eight cores - and "SMT" support.

Two months later we learned that AMD was also working on a monstrous High Performance Computing APU with 16 Zen cores and a huge integrated GPU in addition to stacked High Bandwidth Memory. We also learned that AMD is planning to introduce high performance server CPUs with up to 32 Zen CPU cores. Hearing about all of those different SKUs is jolly exciting but it was also quite frustrating as we had no idea what to expect from Zen. That is until AMD revealed a whopper at its Financial Analyst Day earlier this year, which is that Zen will have a 40% instruction per clock improvement over its predecessor "Excavator".

In addition to SMT, Zen also features a new high-bandwidth low latency cache system. A vital improvement over the previous generation of cores. Since subpar cache performance was one of the primary pitfalls of AMD's Bulldozer CPU microarchitecture. The new CPU core is designed for and will be manufactured on an advanced FinFET process. Which would allow the CPU core to scale from low power mobile applications to high performance desktop and enterprise markets.

Zen To Feature A 40% Instructions Per Clock Improvement Over Excavator

Mark Papermaster, AMD's Chief Technology Officer revealed that the company plans to introduce a huge IPC improvement with Zen over AMD's latest generation "Excavator" x86 core. A 40% increase in IPC would represent the largest jump in IPC ever for the company, an improvement which Mark Papermaster claimed he had not seen "anywhere in the industry".

Zen will be featured in AMD's enthusiast CPU product line in 2016. Lisa Su confirmed that the new CPU architecture will be arriving to desktop FX CPUs first and to servers second. Succeeding Zen will be Zen+ cores. Which will feature evolutionary improvement over Zen. The company will introduce a new socket in 2016 dubbed AM4 that will house products spanning from high performance CPUs to mainstream APUs based on Zen and next generation FinFET GCN based GPUs.

The new family of high performance FX CPUs which appeared in previous leaks as "Summit Ridge" will feature SMT CPUs with high core counts and DDR4 memory support. The platform will be based on the new AM4 socket and a new yet undisclosed chipset. Unconfirmed leaks indicate that Summit Ridge will feature CPUs with up to 8 Zen cores and 12MB of L2 and L3 cache, but that is yet to be confirmed.