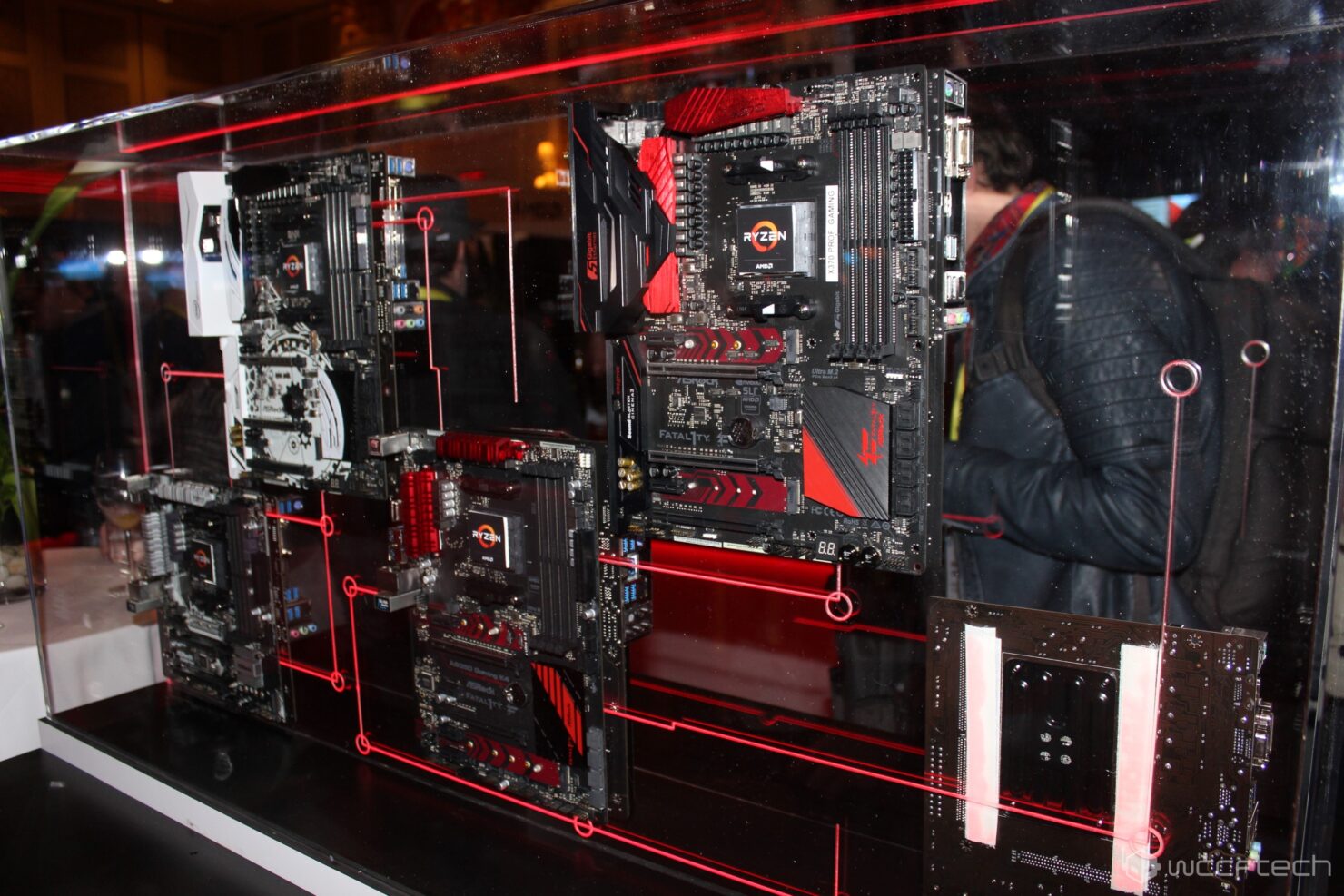 AMD has unveiled new high-end AM4 motherboard designs which will support the upcoming Ryzen CPUs. The new motherboards were showcased a few hours before the Vega event where AMD is expected to unveil a lot of details of their next-generation GPU architecture.

The AM4 motherboards displayed consist of designs utilizing the X370, B350 and A320 chipsets. ASRock, MSI, Biostar, Gigabyte, Maxsun revealed their motherboards at the event. There were also several system builders who displayed PCs featuring AMD's Ryzen processors. These PCs will be immediately available when Ryzen is introduced in Q1 2017.

“2017 will be an unforgettable year for AMD, its technology partners and the PC industry as a whole, and we’re thrilled to kick off the year at CES by showing wide arrays of high-performance motherboard and PC designs from our OEM partners for whom the future is Ryzen,” said Jim Anderson, senior vice president and general manager, Computing and Graphics Group, AMD. “AMD and our partners are committed to supporting enthusiasts, gamers, and creators with a new generation of computing innovation and choice through AMD Ryzen processor-based motherboards, custom-built PCs, and coolers built to support these impressive systems.” via AMD

Motherboards built by various AIBs will be aimed at the PC DIY market with loads of CPU and I/O features. General availability of the high-end boards is expected around February / March 2017. Let’s take an in-depth look at all of the chipsets:

First up, we have X370, a high-end chipset for overclockers and tweakers who need robust platforms. This chipset provides the ultimate low-level control to its users and delivers ultimate graphics card bandwidth. By bandwidth, AMD is referring to max PCI Express lanes as this is the only chip in the stack that supports multi-GPU functionality. The chipset supports both, CFX (CrossFire) and SLI. Features of X300 series chipsets include:

AMD has mentioned two full x16 (Gen3) lanes for GPUs. AIBs can add additional lanes through a PLX chip but that would add to the cost. X370 features full overclocking support with a very sophisticated GUI that will allow the best overclock tools and experiences. Since all AM4 CPUs have an unlocked multiplier, record breakers will definitely put X370 boards to the test on liquid and LN2 setups. The X300 series motherboards AMD displayed at the event include:

AMD and its motherboard partners today debuted a wide array of new motherboards from ASRock, Asus, Biostar, Gigabyte, and MSI, all built upon two upcoming desktop chipsets for AMD Ryzen processors: the X370 and X300. X370 chipset-based motherboards are designed for those who need the most performance, cutting-edge features, and superior I/O connectivity from their PCs including support for overclocking1, and dual graphics. For users looking for performance in a more compact size, the X300 chipset also features an AMD Ryzen-ready AM4 socket while utilizing the mini-ITX size ideal for small form factor PCs. via AMD

AMD B350 is the mainstream chipset and offers the most value in terms of I/O and functionality. This chip offers lower lanes compared to X370 since AMD believes that most users don’t go multi-GPU in this segment. Aside from that, the chipset does retain overclocking support for all AM4 CPUs that will be offered in the future. This chipset replaces the 970 and A78 platforms.

The AMD B350 chipset features 70% power reduction over its AM3+ predecessor (5.8W vs 19.6W). The latest DDR4 memory controller also offers 22% more bandwidth compared to DDR3. Following is the list of all B350 chipset motherboards displayed by AMD:

The A300 is the chip designed for Small Form Factor (SFF) computers and generally, HTPC builds. This offers the ultimate power and space efficiency in the entire product stack. This is a new chip that has been exclusively built for the SFF niche. A300 has limited functionalities but will be extremely cheap and allow for great SFF setups.

AMD is also working with 15 cooler manufacturers to deliver new 3rd party thermal solutions right in time for Ryzen's launch. At launch, Noctua will be providing their flagship NH-D15 cooler and silent NH-U12S coolers with full compatibility for the AM4 socket. Similarly, EKWB will also be offering full support for the AM4 socket by offering a large number of liquid cooling solutions.